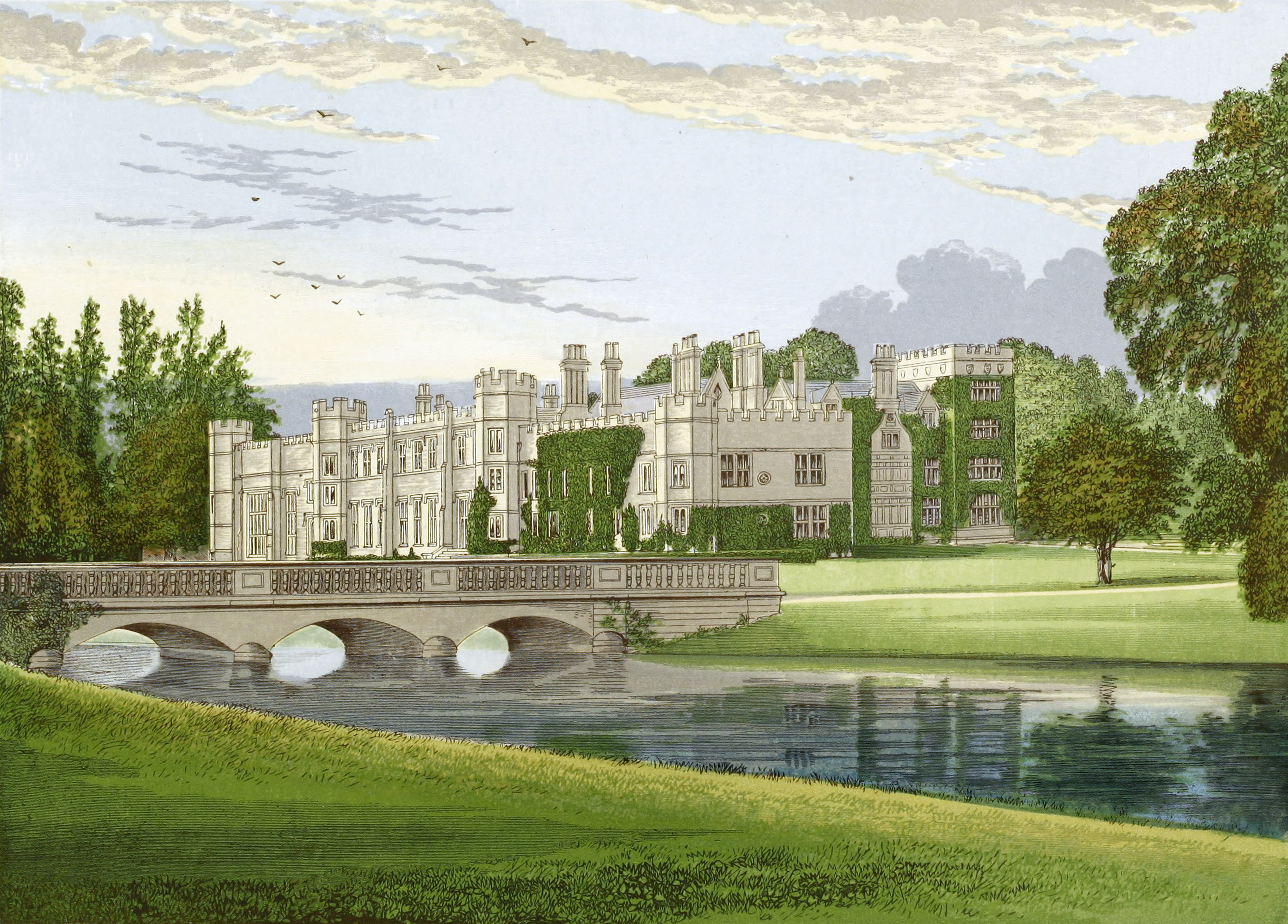 Near Rockingham, Northamptonshire.—Countess of Cardigan.

Deene Park, the beautiful seat of the Countess of Cardigan and de Lancastre, was formerly a Priory, belonging to the Abbey of Westminster at the time of the Conqueror’s Survey. The Abbot of Westminster was Lord of the Manor, and occasionally resorted thither for his pleasure.

In the reign of Henry the Second the lands were in the possession of Ralph Fitz-Nigel, who held them of the See of Westminster.

In the sixteenth year of King John, (1214), Ivo de Deene levied a fine on this manor, to be held of the Abbot of Westminster, by certain services and an annual payment of £18; and in the ninth year of King Edward the Second, (1315), Henry de Deene was lord of the manor. From this family it passed to the Tyndales; it subsequently came into the possession of the Littons, from whom it went, in the sixth year of Henry the Eighth, (1514), to the Brudenells.

We read that Edmund Brudenell, by will dated 21st. June, 1425, gave to St. John’s Hospital in Aynhoe, his missal and a chalice for celebrating a requiem mass on the anniversary of his death.

Sir Thomas Brudenell, Knight, his eldest son, who in 1543 was Sheriff of the County. On the 29th. of June, 1611, Thomas Brudenell was raised by King James the First to the degree of Baronet, then instituted, and on the 26th. of April in the third of Charles the First (1627) he was elevated to the dignity of a Baron of the realm, by the title of Lord Brudenell of Stanton Wyville, in Leicestershire. He was a zealous supporter of the royal cause during the civil wars, and sufi”ered a long imprisonment in the Tower, and on the restoration of Charles the Second, by letters patent, dated the 20th. of April in the thirteenth of that reign, he was created Earl of Cardigan.

The mansion at Deene is a handsome irregular stone structure with embattled turrets. The hall has a timbered panelled roof, and the windows contain the coats of arms of the noble families of Brudenell, Montagu, and Bruce, with their alliances, etc. The library contains a collection of manuscripts relating to this county by Thomas, first Earl of Cardigan, and in the principal rooms are some excellent family portraits.

The scenery of the magnificent park is very diversified; the pleasure grounds and lakes are extensive, and laid out with great taste; and the majestic elms and stately oak trees cannot be surpassed. The park is well stocked with herds of red and fallow deer.