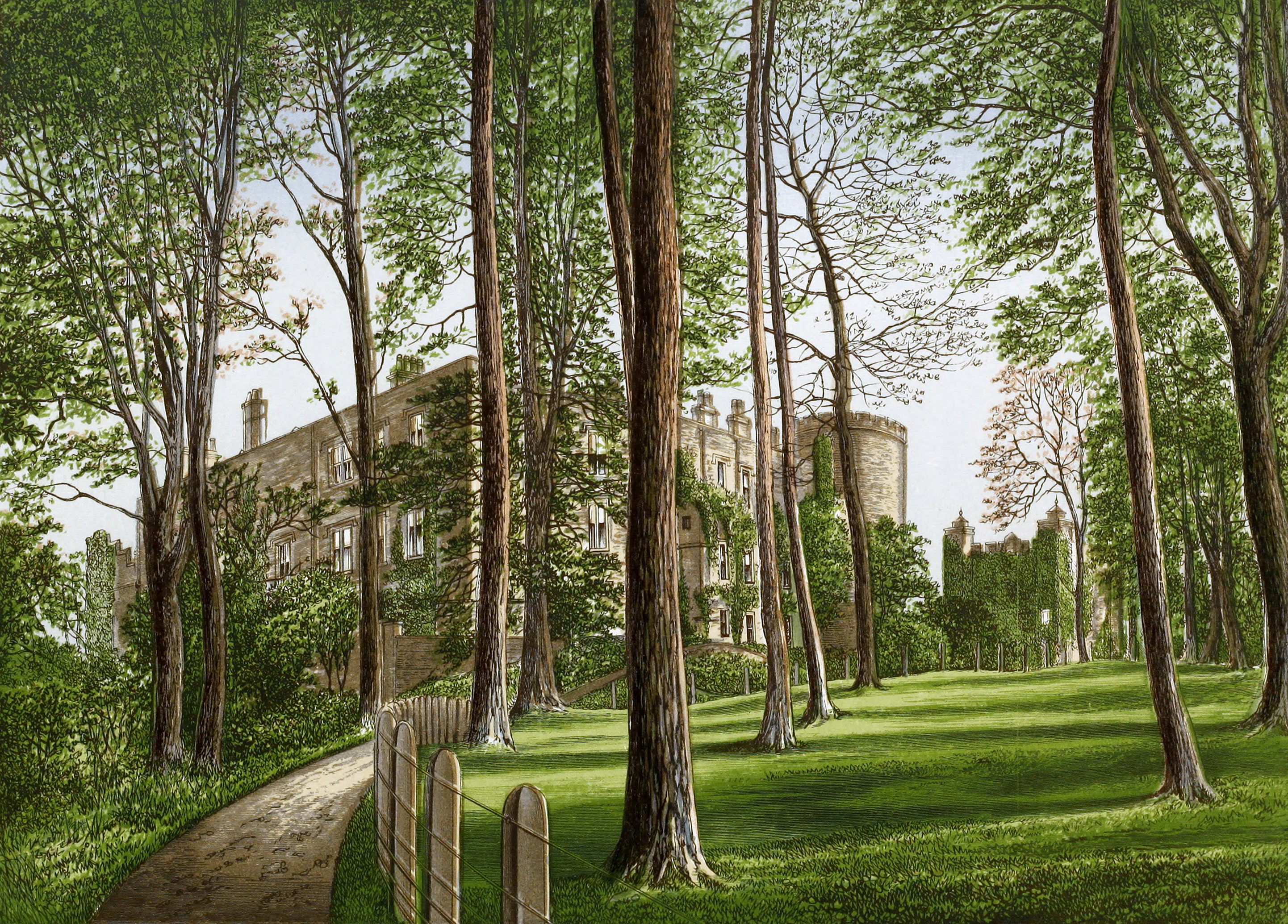 This edifice is generally believed to have been founded previous to the Norman Conquest, but was in all probability rebuilt shortly subsequent to that period, and again progressively re-edified by successive noble proprietors.

Of the buildings now in existence the most ancient is a structure of extensive proportions that appears to be of Norman origin, although, like many similar erections, it is called Csesar^s Tower. At one time there was a brass plate upon a wall in the vault, bearing the following inscription:—“This Cæsar’s Tower began to bee repaired and this middle wall to bee built from the foundation in 1651 by Ann, Baroness Clifibrd, Westmorland, and Vesey, Lady of Honour of Skipton in Craven, and Countess Dowager of Pembroke, Dorsett and Montgomery, after it had laid ruinous and uncovered from the year 1559 until now.”

The principal part of the present structure was built by Thomas, Earl of Thanet, in the year 1686, from the ruins of the old castle. It is of a square form, and contains several apartments of noble dimensions, which are enriched by a large collection of curious and valuable family portraits. The magnificent suit of armour worn by George CHfibrd in the tilt-yard, when he acted as champion to his royal mistress. Queen Elizabeth, is likewise preserved here; it is ornamented with fleur- de-lis, and is very richly gilt; his horse armour, used on the same occasion, is equally superb, and lies near it.

This castle was for a considerable period the residence of the Clifibrd family; and was fortified for the king in 1641, by Lady Anne Clifibrd, who gave the government of it to her neighbour. Sir Philip Musgrave, and he held it out till after the battle of Marston Moor, when he was obliged, contrary to his inclination, to surrender it to the parliamentarians.

The following is a brief record of Appleby, and of the families into whose pos- session it has at various times fallen:—“Three times had this castle and estate been carried as a marriage portion by heiresses, before it came into the possession of Simon de Morville, and when his grandson, Hugh de Morville, thinking to do his sovereign a service, kept the door, while his companions slew Thomas a Becket in his Cathedral at Canterbury, it was forfeited to the Crown, and in the Crown it remained until the time of King John. It was during this period that the borough of Appleby received its charter, and secured possession of its high privileges as a royal burgh. The burgesses were subject to no lord, but held in capite directly from the Crown, and, as a consequence, the mayor of this ancient town is a person of no small consequence within the boundaries of his own borough, and is entitled to take precedence even of Her Majesty’s judges. From an old document copied into the margin of Gibson’s translation of Camden in the library at Lowther, it appears that Appleby was a county of itself in the fourth year of King John ; that is, at the time the first grant was made to the Veteriponts. And it is worthy of remark, that long after the second grant Appleby Castle was dealt with as one of the king’s fortresses, or a royal fort, and the owner addressed as Constable of the King’s Castle, at Appleby. Even so late as Edward the First, when the Pope claimed the kingdom of Scotland as a fief, and the Barons of England wrote a letter denying the claim, and afiixed their names, Robert de Clifford, whose name occurs in the list, is styled Chatelain of Appleby, while all the rest are called Barons.

From the Veteriponts the estate passed to the Cliffords, through Isabella, daughter and coheiress of Robert de Veteripont. She and her sister Idonea, one aged ten and the other six or seven years, were committed by the king, who had them in ward, to the custody of Roger de Clifibrd and Roger de Leyburne, and these two knights thought they could not better consult the interests of the coheiresses than by marrying them to their sons Roger de Clifford and Roger de Leyburne, and thus dividing the inheritance between them. The estate continued in the Clifford family until the thirteenth generation, when the daughter of Anne, Countess of Pembroke, carried it to the Tuftons; John, second Earl of Tlianet, having married Margaret, daughter of Richard Sackville, Earl of Dorset, by his wife the Lady Ann Clifford.”

The very ancient family of Tufton, Earls of Thanet, became extinct as to the ennobled branch in the person of Henry Tufton, the eleventh Baron, Lord Lieutenant of Kent, and hereditary Sheriff of Westmoreland, when the representation of the family and the estates, (Skipton Castle, Yorkshire, Appleby Castle, in Westmoreland, and Hothfield Place, Ivent,) came by will to

Sir Richard Tufton, Baronet, so created in 1851, who was succeeded by

Sir Henry Jaques Tufton, second Baronet, married December 17th., 1872, to Alice Harriet Argyll, second daughter of the Rev. William Stracey, of Buxton, in the county of Norfolk, and had a son,