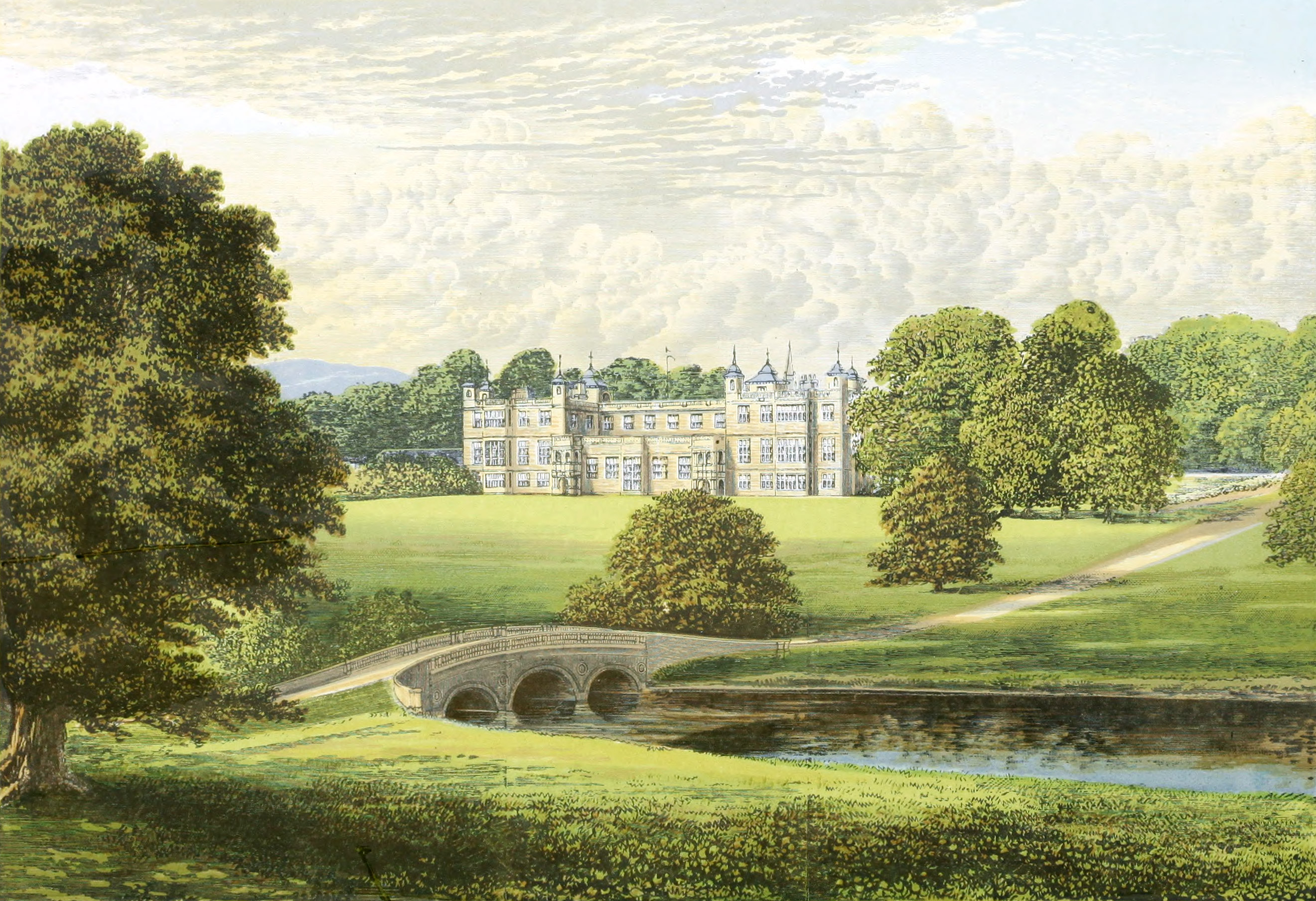 This princely residence holds a distinguished place among the “County Seats” of England.

The old manor, which was vested in the crown, was bestowed by King Henry the Eighth on

Sir Thomas Audley, then Lord Chancellor of England, who was raised to the

peerage in the year 1538 under the title of Baron Audley of Walden,—Walden Abbey having also been appropriated by the king at the dissolution of the monasteries, and bestowed on Sir Thomas together with the estate. His daughter and heiress,

Margaret Audley, married, first, Lord Henry Dudley, younger brother of the husband of Lady Jane Grey, and, secondly, having no children, she became the second of the three wives of Thomas Howard, fourth Duke of Norfolk.

Of the second marriage there were two sons,

2. William, ancestor of the Earls of Carlisle.

Thomas Howard, inherited from his mother the estate of Audley End, and was summoned to the House of Lords by Queen Elizabeth as Baron Howard of Walden. He was further elevated by King James on the 21st. of July, 1603, to the title of Earl of Suffolk, and was soon afterwards appointed Lord Chamberlain, and in performance of part of the routine of his office had to inspect the Houses of Parliament before the opening of the session, which he accordingly did in company with Lord Monteagle, to whom notice of the Gunpowder Plot had been given, and thus, on the 4th. of November, 1605, discovered the materials laid for the intended blowing-up of the assembled Lords and Commons. In the year 1618 he was appointed Lord High Treasurer of England, but being, as the father-in-law of the fallen courtier Robert Carr, Earl of Somerset, obnoxious to Buckingham, the new favourite, he was deprived of his office, and committed, together with his countess, to the Tower. It was this nobleman who erected the magnificent palace of Audley End. He died in 1626, leaving a large family, of whom the eldest son,

Theophilus Howard, succeeded to the title and estate, and had a son and successor,

James Howard, the third Earl, who, about the year 1668, sold the park and mansion to King Charles the Second for £50,000, of which £20,000 was left unpaid at the Revolution, and in the year 1701 the demesne was re-conveyed to the family of Howard, the fifth Earl of Suffolk, he on receiving it, relinquishing his claim upon the Crown for the balance of the debt. His descendant,

Henry, tenth Earl of Suffolk, died without issue in 1733, when the Earldom devolved on his distant cousin,

The title to the estate of Audley End then became disputed, between the second Earl of Effingham, who claimed under a settlement made by the seventh Earl of Suffolk, and the heirs of the two daughters of the third Earl. The Courts of Law decided in favour of the latter, namely,

The Honourable Elizabeth Griffin, wife, first of Henry Neville (Grey,) Esq., who assumed the last surname, and secondly, of the Earl of Portsmouth, and her sister Anne, who married William Whitwell, Esq. Of these two ladies, the former had no children, but the latter had a son, in whose favour the abeyance was terminated as

Lord Howard of Walden. He had no children, and consequently, in consideration of his mother being sprung from the great house of Neville, he obtained for himself another barony, that of Braybrooke, with a remainder to his relative Richard (Aldworth) Neville, son of Richard Aldworth, Esq., who was maternally descended from that family.

On the death of Lord Howard, in 1797, he was succeeded by the said

Richard Neville, as second Lord Braybrooke, who was followed by

The vast pile of Audley End is said to have cost no less than £190,000, a stupendous sum measured by the value of money in those days. It has received several subsequent alterations, but for the most part has been treated with good taste, and well preserved.

There are many valuable portraits in the house, and among them one of Lord Chamberlain Audley, by Holbein, and one of his daughter, the Duchess of Norfolk, by Lucas de Heere.

The family of Lord Braybrooke derives in the male line from Richard Aldworth, Esq., of Stanlake, living in the middle of the eighteenth century.