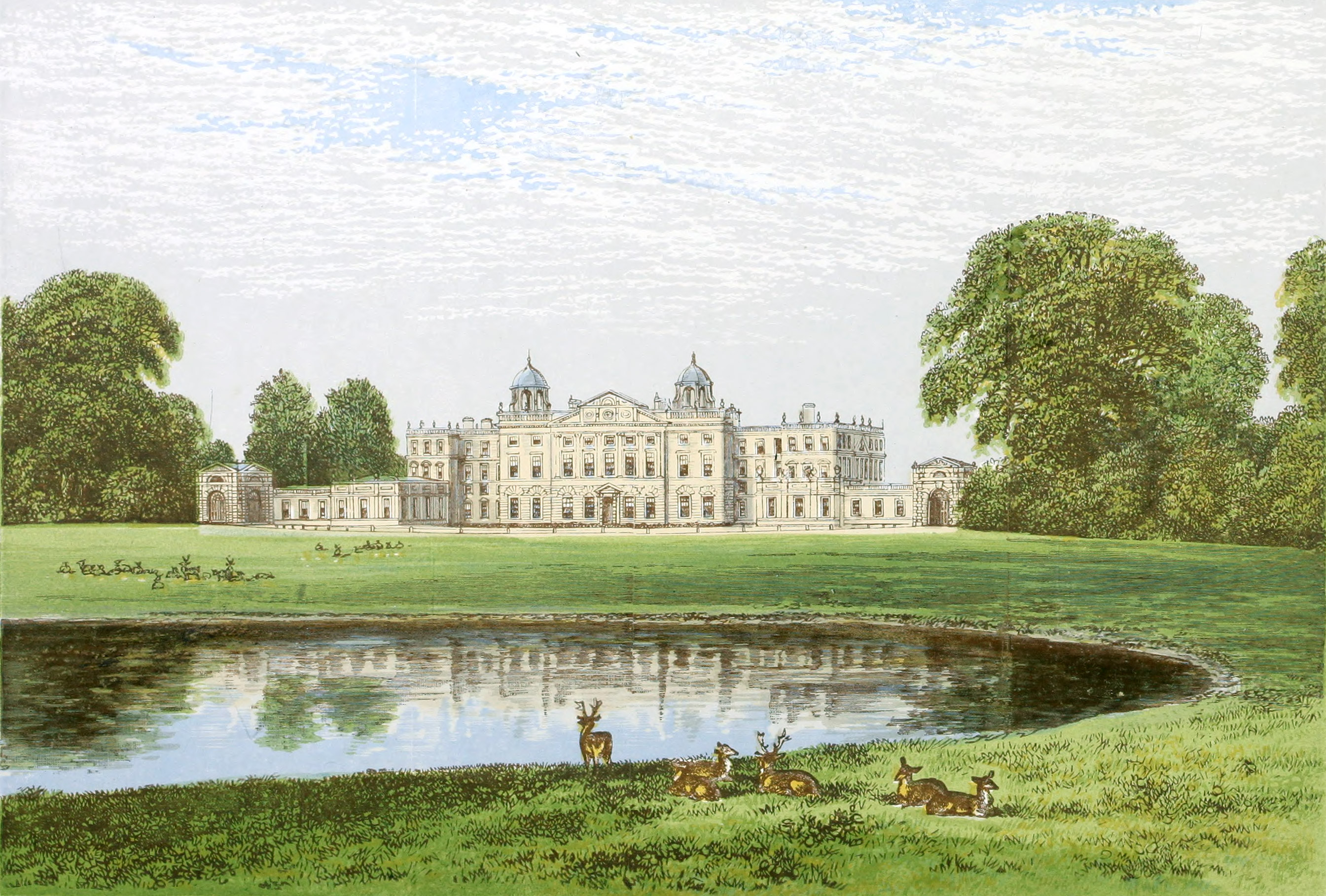 Near Tetbury, Gloucestershire.—Duke of Beaufort.

The first possessor of Badminton on record was one

Edrick, who held it in the reign of King Edward the Confessor. Next

Ernulf de Esding owned it in the time of the Conqueror, and afterwards it was held for several centuries by the family of

Nicholas Boteler, in the year 1608, sold the estate to

The Honourable Sir Thomas Somerset, K.B., third son of Edward, fourth Earl of Worcester, who in the year 1626 was created Viscount Somerset of Cashel, in the county of Tipperary, in Ireland. He left an only daughter and heiress,

Elizabeth Somerset, who dying unmarried, bequeathed the Castle to

The park is very extensive, being nearly ten miles in circumference.

The house within is splendidly decorated.

In the great dining-room is a large quantity of valuable carving in wood by Grinling Gibbons.

The picture gallery contains a fine series of family portraits. The most remarkable of the others is a satirical painting by Salvator Rosa, for which he was expelled from Rome. There also may be found the head of Guido, by himself; one of Cardinal Alberoni, by Trevisani; of Erasmus and Sir Thomas More, by Holbein; and of Cornelius Jansen, by himself. Also several excellent landscapes by Italian masters, The Holy Family, by Raphael, and other much-admired pictures by Guido and Carlo Dolce.

Badminton was visited in the year 1702 by Queen Anne and her Consort, Prince George of Denmark.

The family of the Duke of Beaufort derives from Charles Somerset, an illegitimate son of Henry, Duke of Somerset, K.G., himself descended from an illegitimate son of John of Gaunt, Duke of Lancaster, son of King Edward the Fourth. He married Elizabeth, only daughter and heiress of William Herbert, Earl of Huntingdon, Lord Herbert of Ragland, Chepstow, and Gower, and was summoned to Parliament as such in the first year of Henry the Eighth. He was created Earl of Worcester for the distinguished part he had in the taking of Tournay and Terouenne. He was father of

William Somerset, K.G., third Earl, was followed by his son,

Edward Somerset, fourth Earl, created Viscount Somerset of Cashel, in the county of Tipperary. His eldest surviving son was

Henry Somerset, fifth Earl, advanced to the dignity of the Marquis of Worcester, November 2nd., 1642. His eldest son was

Edward Somerset, second Marquis. He published a work in which the power and application of the steam engine are distinctly described. His son,

Henry Somerset, second Duke, and he by his elder son,

Henry Somerset, third Duke. He by his brother,