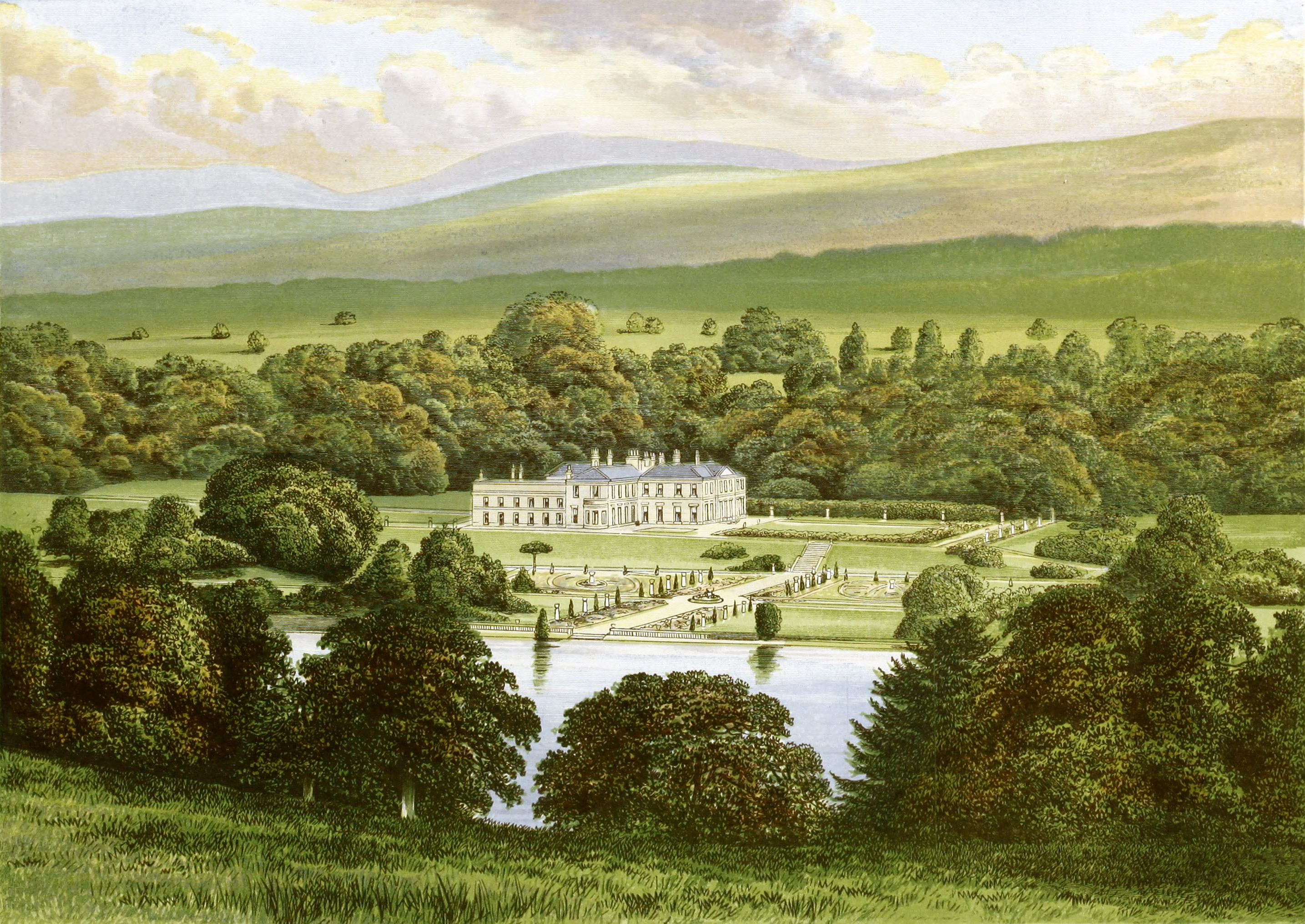 Barons Court, the seat of the Duke of Abercorn in Ireland, is a very extensive domain, the grounds belonging to the park and woods extending to between five and six thousand acres, surrounded by an estate of about eighty thousand acres in the counties of Tyrone and Donegal.

From the house, extending to one of the lakes, are terraced gardens of great beauty, in the Italian style, with stone parapets and steps, and decorated with vases.

In the park are three lakes of great beauty, the largest about two miles in length.

The evergreens, and especially the rhododendrons, are remarkable for their beauty and size, many of the woods having their undergrowth almost entirely composed of them.

The drives and walks in the grounds, which are of great variety and picturesque beauty, extend to nearly thirty miles.

The estate of which Barons Court forms a part, was granted by King James the First, to James, Earl of Abercorn, in 1611, at the time of the plantation of Ulster. The estates held by the Earl under the Plantation Settlement, were bound to furnish six hundred men, fully armed and equipped, of English or Scotch blood, as a protection against disturbances by the native Irish.

The Duke of Abercorn, as stated below, is the male heir and lineal representative of James, Duke of Chatelherault, Regent of Scotland in 1548, and declared by the Parliament of that country to be the next heir to the Crown of Scotland.

I quote the following from my friend Sir Bernard Burke’s “Peerage and Baronetage:”—“Abercorn, Duke of, (Sir James Hamilton, K.G., P.O., D.C.L., LL.D.,) Marquis of Hamilton, Viscount Strabane, Lord Hamilton, Baron of Strabane, and Baron of Mountcastle, in tbe peerage of Ireland; Marquess of Abercorn and Viscount Hamilton, in tbe peerage of Great Britain; Earl of Abercorn, Baron of Paisley, Aberbrothick, Abercorn, Hamilton, Mountcastle, and Kilpatrick, in the peerage of Scotland; a Baronet of Ireland; Duke of Cliatellierault, in France; Heir Male of the House of Hamilton; Lord Lieutenant-General and General Governor of Ireland; Lord Lieutenant and Gustos Rotulorum of the County of Donegal, Colonel of the Donegal Militia, and Major-General of the Royal Archers (the Queen’s Body Guard of Scotland); a Governor of Harrow; late Groom of the Stole to H.R.H. the Prince Consort; born 21st. Jan., 1811; succeeded his gi-andfather, as second Marquess, 27th. Jan., 1818, and was created Duke of Abercorn and Marquess of Hamilton, 10th. Aug., 1868; married 25th. Oct., 1832, Lady Louisa Jane Russell, second daughter of John, sixth Duke of Bedford, K.G.

“His Grace was appointed Lord Lieutenant of Ireland in 1866, and was raised to the Marquessate of Hamilton and Dukedom of Abercorn, 10th. Aug., 1868, in recognition of his very able administration of the Government of Ireland during a critical and difficult period. He resigned the Lord-Lieutenancy of Ireland in 1868, and was appointed a second time, March, 1874. He was served Heir Male of the body of the first Duke of Chatelherault, by the Sheriff of Chancery in Scotland 13th. Jan., 1862, and, as such heir male of the first Duke, asserts his hereditary right to the original title of Duke of Chatelherault of 1549. By the edict of Louis XIV., May, 1711, the descent of French dukedoms was declared to be to heirs ‘descendus de mâles en mâles.’”