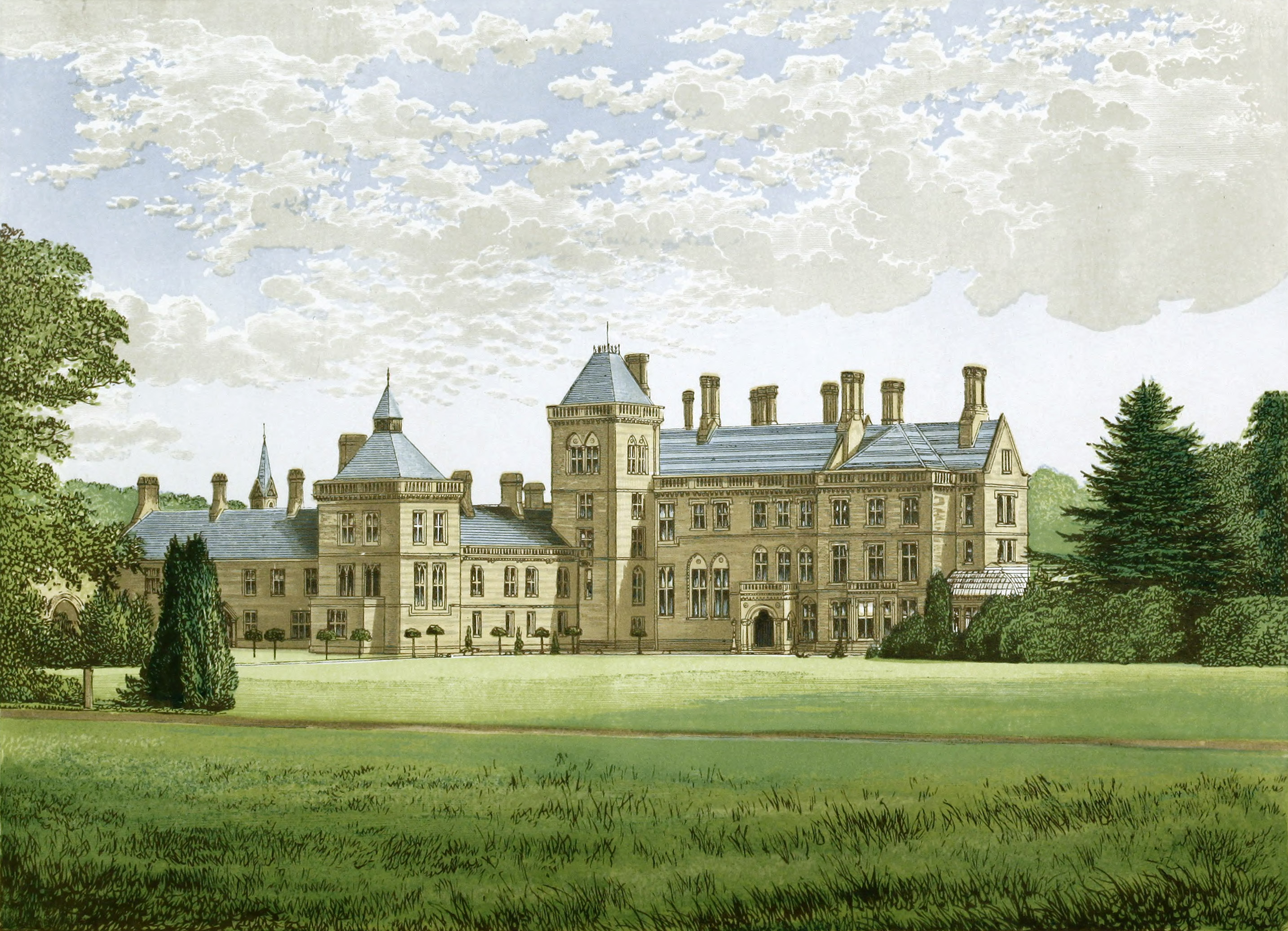 Walton Hall is situated in a picturesque valley surrounded by extensive woods, six miles from the town of Stratford-on-Avon.

The house was almost entirely rebuilt during recent years by Sir Gilbert Scott, the style of architecture being Gothic; and extensive alterations were made under the superintendence of the same distinguished architect, including the building a new bridge, and largely extending the lawns by turning the course of the water in front of the house, so as to form a lake.

A succinct account of the genealogy and great antiquity of the family of Mordaunt is given in that rare and curious work, Halstead^s “Genealogies,^^ of which ten copies only are remaining, one of these, from which the following extracts are copied, being in the library at Walton Hall.

“In the year 1066, amongst other Heros who joynM their hopes and assistance to the famous William Duke of Normandy, there was a Noble Knight called Eobert of St. Giles, in the Latin tongue Robertus de Sancto Ægidio, who brought to his service Fourscore Knights out of the South of France. Of this Robert of St. Giles no more is extant of what he was than the assurance that the Sovereign Lords and Princes of Thoulouse did all at that time use the name and appellation of St. Giles or de Sancto Ægidio, and that after his labors in the war he was rewarded by the Conqueror with great Lands and noble Possessions.

“His son, Eustace of St. Giles, did survive his father, and possessed his acquisitions by a Charter, wherein he gave to his brother Osbert, who assumed the name of Le Mordaunt, the Lordship of Radwell and other lands in the County of Bedford. Osbert assumed the name of Le Mordaunt, derived from the words Dare Mortem, to destroy his enemy, he having set out to make his fortune by adventures of Arms, and for his good services he received many lands and fair possessions in other counties. From this Osbert all the Mordaunts do derive, as will appear by a con- tinued series of Ancient Charters and unquestioned Proofs that are extant, and shall be exposed.

“The eleventh in descent from Osbert was John Mordaunt, who joyn’d Richard Nevil, Earl of Warwick, in the reign of Edward IVth., and was with him at the Battle of Barnet, where his Patron was slain and he himself severely wounded. He afterwards afforded great and successful assistance to Henry Vllth., both at the Battles of Bosworth and Stoke Field, for which services he received the honour of Knighthood, and was made a Privy Councillor and Chancellor of the Duchy of Lancaster.

The family of Mordaunt first lived at Walton in 1572, when Robert Mordaunt, of Massingham, Norfolk, married Barbara L’Estrange. His grandson, who signalised himself during the reign of Elizabeth as a military commander in the wars in the Low Countries and in Ireland, was one of the first Baronets created in 1611, and became Sir L’Estrange Mordaunt.

In the village church of Turvey, on the western borders of the county of Bedford, are still remaining many beautiful and well-preserved marble monuments of the sous and daughters of the family of Mordaunt.