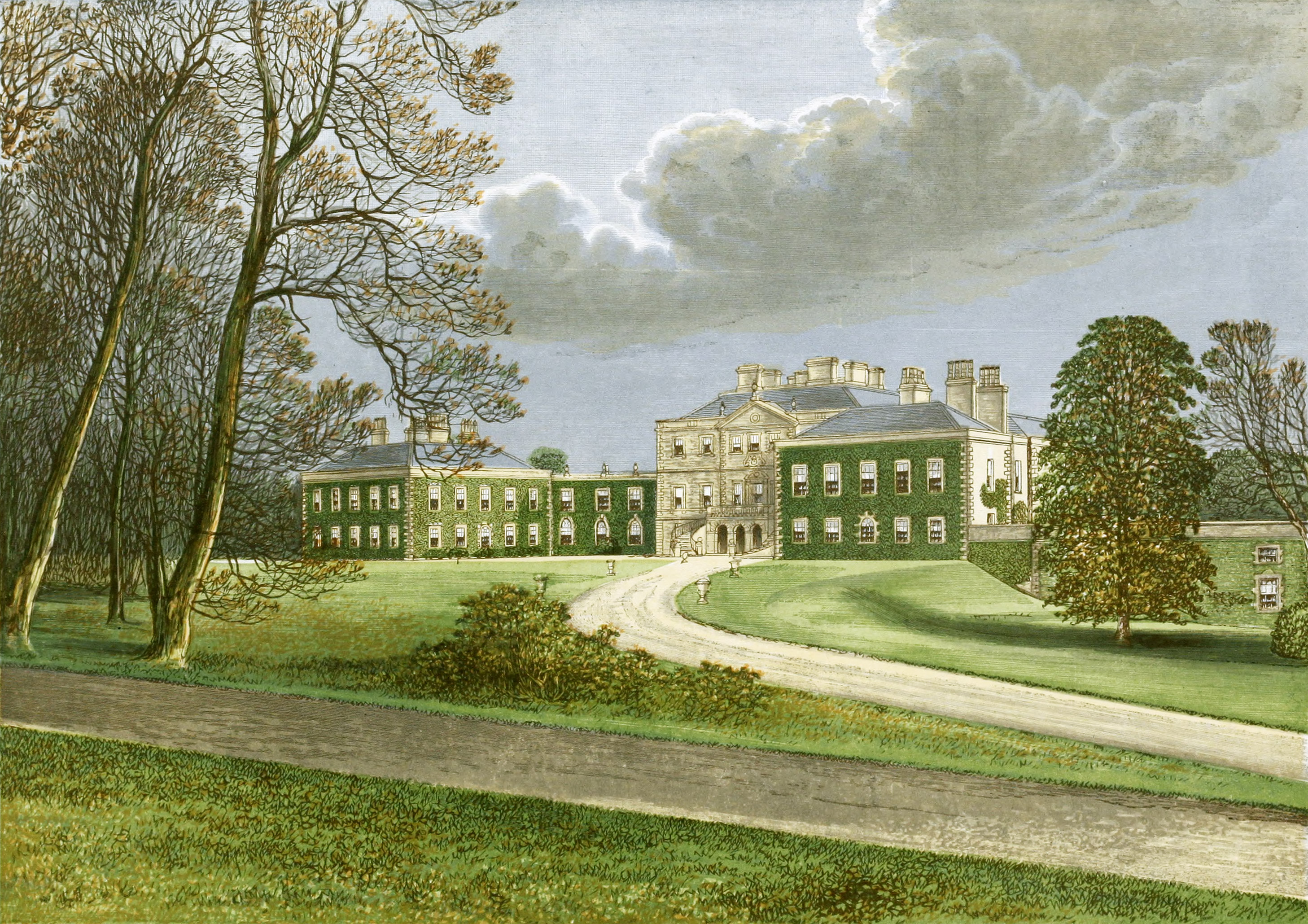 Haddo House is very pleasantly situated in the Formatine district of Aberdeenshire. The policies and deer park are a triumph of landscape gardening. The grounds, though undulating, are without much natural beauty; but by the good taste of the fourth Earl of Aberdeen, the well-known Prime Minister, they were skilfully adorned with vast plantations, intersected with drives extending over sixty miles, producing an effect both stately and picturesque—an effect greatly added to by three lakes of great beauty, the resort of innumerable wildfowl. One of the lakes is highly stocked with trout from Loch Leven.

It was to the fourth Earl of Aberdeen that the Highland Society’s gold medal was awarded, as the then most extensive planter of trees, upwards of four thousand acres having been planted by him in the earlier days of his occupation of Haddo House.

The House was built in 1732, by William, the second Earl. It contains several celebrated pictures by the old and best Italian Masters, as well as some of Sir Thomas Lawrence’s finest works.

The more ancient name of the seat was House of Kelly, and during the Eebellion it was the subject of a siege, and was partially burnt down.

The property surrounding it, which has been acquired at different periods since 1440, is very extensive, and includes great part of the valley of the Ythan.

In this valley stands the castle of Gight, the seat of “Lord Byron’s maternal ancestors, now a beautiful ruin, but which was the home of the Prime Minister in his boyhood. The latter stands on the verge of a steep bank, at the foot of which the River Ythan winds through a charming and richly wooded valley, well known in the country as the Braes of Gight, and as the favourite and admired resort of holiday-makers and visitors to the district of Buchan.

The Gordons have been in possession of Methlic since 1440, in which year

Patrick Gordon, was rewarded for his father’s loyalty by a grant of a part of the barony of Kelly. He also acquired by purchase many other lands still in possession of the family, who have now been lords of the soil for sixteen generations.

Ninth in descent from Sir Patrick, was

Sir John Gordon, of Haddo, who took up arms for King Charles the First, and was appointed second in command to the Marquis of Huntly. He stood a siege in the House of Kelly, but was eventually taken prisoner, incarcerated at Edinburgh, in a place still known as Haddo’s Hole, and beheaded in 1644. He was the father of a younger son.

Sir George Gordon, who, having distinguished himself as an Advocate, and after- wards succeeded his elder brother in the possession of the property, was created Earl of Aberdeen, and appointed Lord Chancellor of Scotland by King Charles the Second. This nobleman is a prominent figure in the history of the time. His son,

Sir William Gordon, second Earl of Aberdeen, added very considerably to the family property, and was great-grandfather of

Sir George Gordon, fourth Earl of Aberdeen, who entering the public service early in this century, was engaged as His Majesty’s Plenipotentiary during the wars which terminated with the battle of Waterloo. He occupied different great ofl&ces of state under the Duke of Wellington and Sir Eobert Peel, and finally became Her Majesty’s Prime Minister in 1852. Being at the same time Knight of the Garter and Knight of the Thistle, he was the only individual so decorated since the reign of Queen Anne. He died in 1860, after a possession of fifty-nine years. He was followed by his eldest son.

Sir George Gordon, sixth Earl, after a singular and romantic career of his own choice, was accidentally drowned at sea, January 27th., 1870, when he was succeeded by his only surviving brother.