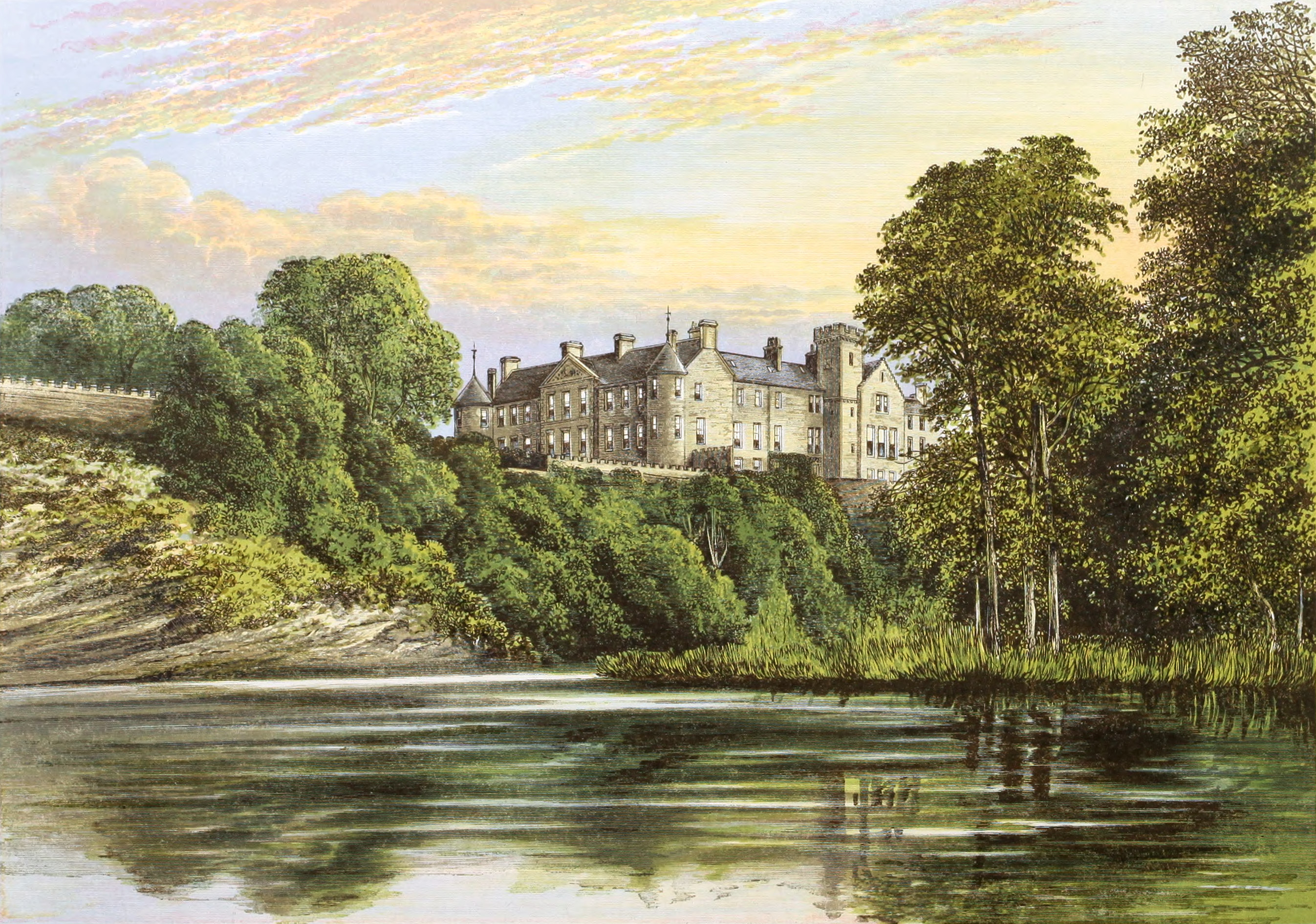 Near Brechin, Forfarshire.—Earl of Dalhousie.

This ancient Castle, built at different times, is very finely situated on the north bank of the river Esk, on the brink of a high precipitous rock, the views from it being exceedingly fine, as may well be supposed. It withstood a long siege in the year 1303 against the English army under Edward the First, and held out for twenty days, till the brave and doughty Governor, Sir Thomas Maule, was killed by a stone flung from a catapult, when his garrison felt themselves obliged to surrender the place. The trees, too, are of great growth, and have stood for centuries.

This family is stated to have been originally of German origin. The first of the name on record appears to have been

Simon de Ramsay, of Dalhousie, in Lothian, who signed as a witness to a grant of the Church of Livingston, in West-Lothian, in the year 1140. From him descended

Sir Alexander Eamsat, Knight, of Dalhousie, Constable, in 1332, of the Castle of Roxburgh, which he had taken by escalade. In descent after him came

James Ramsay, of Dalhousie, who died about the year 1580.

William Ramsay, (his kiusman, grandson of the first Earl,) sixth Earl of Dalhousie, followed by his grandson,

William Ramsay, seventh Earl of Dalhousie, who died unmarried in 1764, and was succeeded by his brother,

George Ramsay, ninth Earl of Dalhousie, born October 22nd., 1770, G.C.B., Colonel of the 26th. Regiment of Foot, and distinguished at Waterloo. He was created a Peer of the United Kingdom, as Baron Dalhousie, of Dalhousie Castle, August 11th., 1815.

James Andrew Ramsay, tenth Earl of Dalhousie, born April 22nd., 1812, who was further raised in the Peerage, August 25th., 1849, as Marquis of Dalhousie, of Dalhousie Castle. He was Constable of Dover Castle, Lord Warden of the Cinque Ports, Lord Registrar of Scotland, Major-General of the Royal Archers, the Queen’s Body Guard of Scotland. He was Governor-General of India from 1847 to 1856. At his death, December 19th., 1860, the honours of the United Kingdom expired, while the Scottish ones devolved on his cousin,

Sir Fox Ramsay, eleventh Earl of Dalhousie, (second Baron of Panmure, son of William Ramsay, first Earl of Panmure, who was second son of George Ramsay, eighth Earl of Dalhousie), K.T., G.C.B., P.C., Keeper of the Privy Seal of Scotland, Lord Lieutenant of Forfarshire, a Commissioner of the Royal Military Asylum, and a Governor of the Charterhouse, Under Secretary of State from 1835 to 1841, Vice President of the Board of Trade in 1848, Secretary of War from 1846 to 1852, and again from 1855 to 1858, resumed his family name of Ramsay after that of the acquired one of Maule. He was born April 22nd., 1801, and married April 4th., 1831, Montagu, eldest daughter of George, second Lord Abercromby, but having died, sine prole, July 6th., 1874, was succeeded by his cousin,