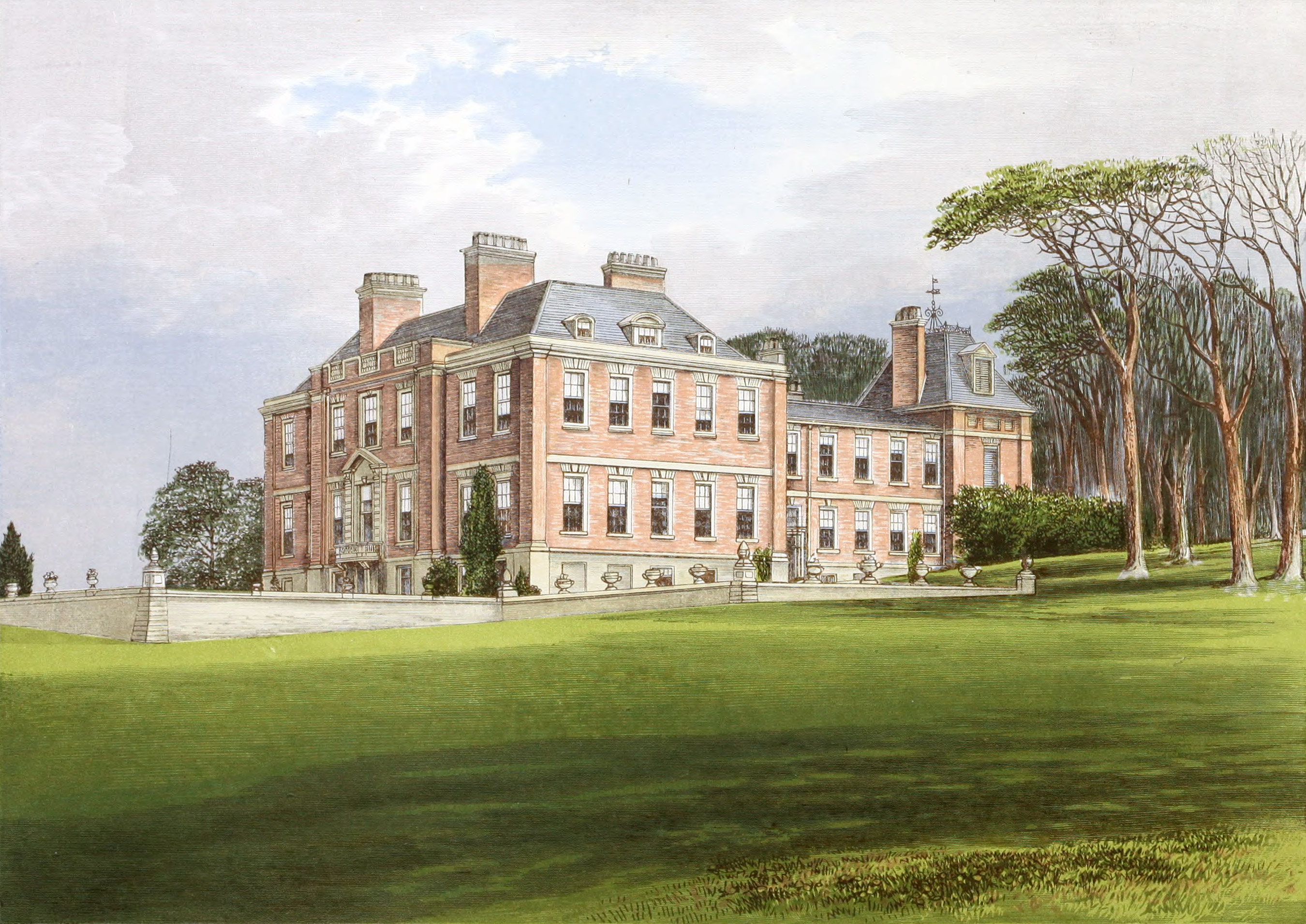 The name of this ancient seat is derived from a family called Pyne, one of whom, a Crusader, settled here in the time of King John.

It passed, as in so many similar cases, from one owner to another, through heiresses, namely, first, to a proprietor called Lorden, next to a branch of the family of Coplestone, and from them was purchased, in the reign of Charles the Second, by Hugh Stafford, Esq., a maternal ancestor of the present family.

It is almost enough to state that it is in Devonshire, to show that it must be in a lovely country, which I can say that it is, having seen it myself more than once.

The house stands on a rising ground overlooking the valley of the Exe, a little way above where that river joins the Creedy, a stream which has given its name to the town of Crediton.

The grounds and estate are well wooded, a feature which, though common to the county, contributes none the less to its ornament.

This is one of those families of high antiquity to which the worthy name of “gentle” of right belongs. It is also one of those, of which instances have been given in previous volumes of this work, which has either received its designation from or given it to a hamlet of the same name.

Galfridus Miles, resident at Northcote, is recorded as living in the year 1103. He was succeeded by his son,

John, written of as “habitantis in Northcote.” He was followed by

Galfridus de Northcote, living in 1118. The elder of his two sons,

William de Northcote, married Margaret, daughter of Robert de Afeton, of whom were three sons, the second being

William de Northcote, married, in 1325, Matilda, daughter of Robert Hillion, the elder of whose two sons,

John de Northcote, married, in 1343, Johanna, second daughter and coheiress of Roger Meoles, with whom the family acquired great wealth. The issue of this marriage were two sons, from the elder of whom,

John Northcote, Esq., of Hayne, also in Devonshire, was created a Baronet, July 16th., 1641. He served the office of Sheriff of the county in the second year of the reign of Charles I., and was M.P. for the same in the twelfth of that of Charles II. He married Grace, daughter and heiress of Hugh Halswell, Esq., of Wells, in Somersetshire, and at his death, in 1676, was succeeded by his eldest son,

Sir John Northcote, second Baronet. He married, first, Elizabeth, daughter and heiress of James Walsh, Esq., of Alverdiscott, and their two sons predeceased him. He married, secondly, Elizabeth, eldest daughter of the Honourable Sir Francis Godolphin. He died in 1688, when he was succeeded by the eldest surviving son of the second marriage, namely,

Sir Francis Northcote, third Baronet. He married Anne, daughter of Sir Chichester Wray, Baronet, but dying, in 1709, without issue, the title devolved on his brother,

Sir Henry Northcote, fourth Baronet, M.D., born in 1655, who married Penelope, daughter and coheiress of Robert Lovett, Esq., of Liscombe, in Buckinghamshire, and of Corfe, Devonshire. He died in February, 1729-30, and their eldest son followed,

Sir Heney Northcote, fifth Baronet, M.P. for Exeter. His wife was Bridget Maria, only daughter and heiress of Hugh Stafford, Esq., of Pynes, in Devon, and they had with other children—he died in 1743—

Sir Stafford Northcote, sixth Baronet, born in May, 1736, and married, in 1760, to Catherine, daughter of the Rev. George Bradford, Rector of Talaton. He died March 11th., 1771, and was succeeded by his only son,

Sir Stafford Heney Northcote, seventh Baronet, born October 6th., 1762, who married, May 6th., 1791, Jaquetta, daughter of Charles Baring, Esq., of Larkbeer, Devonshire, and had three sons, the eldest of whom,

Sir Stafford Henry Northcote, eighth Baronet, successor to his grandfather, P.C., C.B., M.A., D.C.L., M.P. for North Devon, President of the Board of Trade, 1866-7, Secretary of State for India, 1867–8, Lord Commissioner of the Treasury, and afterwards Chancellor of the Exchequer, born October 27th., 1818, and married, August 5th., 1843, to Cecilia Frances, eldest daughter of Thomas Farrer, Esq., of Lincoln’s-Inn, third son of James Farrer, Esq., of Ingleborough, Yorkshire, and had, with several other children, an eldest son,