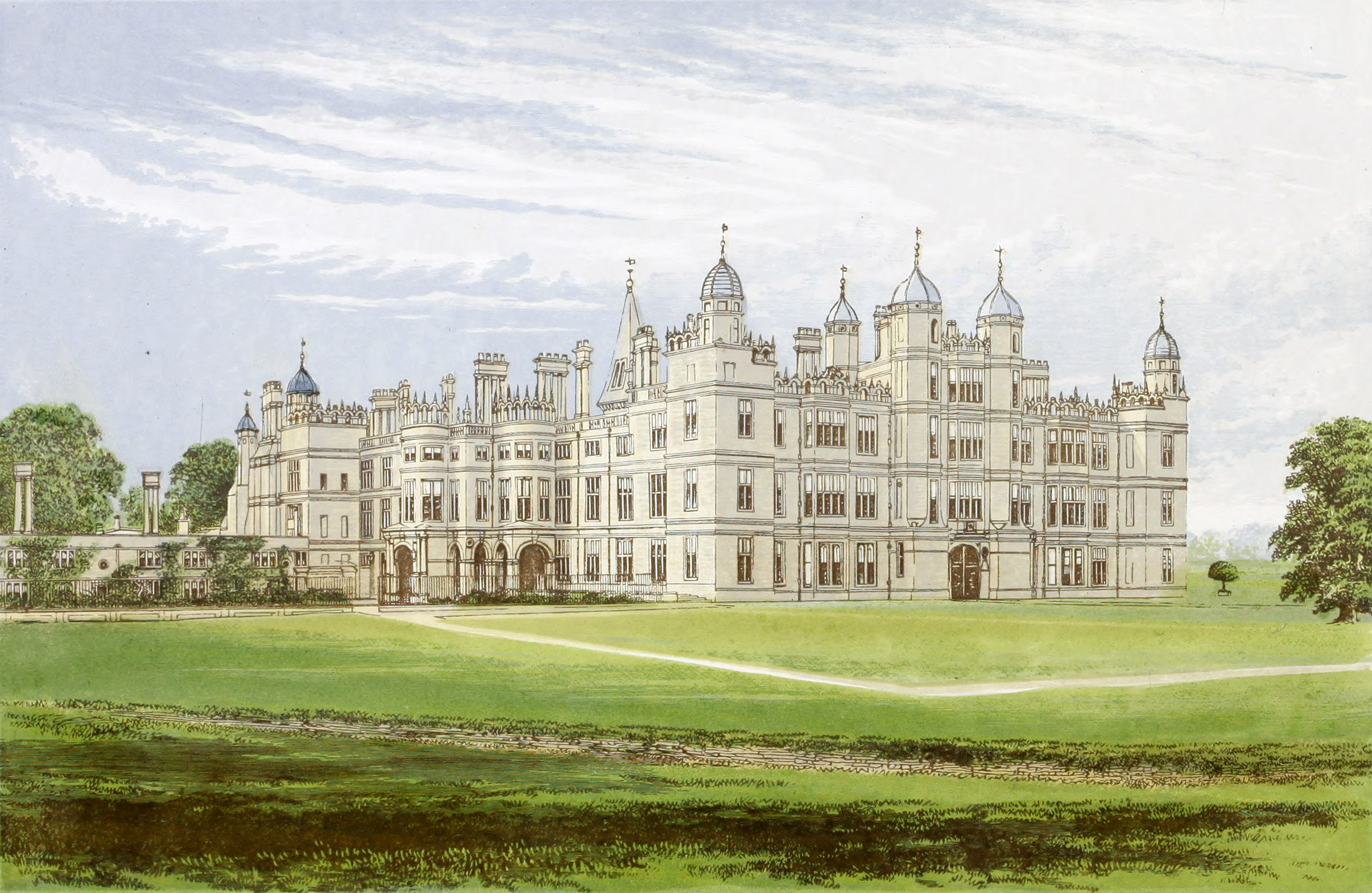 Near Stamford, Lincolnshire.—Marquis of Exeter.

Burghley, or Burleigh House, was begun and mostly built in the reign of Elizabeth by the celebrated

In one of his letters, dated 1585, he says, “My house of Burleigh is of my mother’s inheritance, who liveth, and is the owner thereof, and I but a farmer; and for the building there, I have set my walls on the old foundations. Indeed, I have made the rough stone walls to be square, and yet one side remaineth as my father left it me.”

Over one of the entrances within a central court, is the following inscription recording an earlier period of the work:—“W. Dom. De Burghley 1577.” Beneath the turret is the date of 1585, when many great additions were made to the building. The grand entrance towards the north appears to have been added in the year 1587. Since these dates many other additions and alterations have been made, the whole of the house surrounding a central court.

To the south is a fine sloping lawn, with a broad sheet of water, and views of park scenery. On the west side are similar home views, and distant ones of objects in Rutlandshire, Lincolnshire, and the spires of Stamford. On the north side the ground slopes to the river Welland, and an extensive tract of country is in sight.

About two miles to the west of Burghley House are the ruins of Wothorp, or Worthorp House, where, according to Camden, a mansion of considerable size was built by Thomas Cecil, the then Earl of Burghley, who is recorded to have said that “he built it only to retire to out of the dust, while his great house at Burghley was sweeping.” The Duke of Buckingham resided here for some years after the Restoration.

In the dining-room is a large silver fountain, and two oval silver cisterns adorned with lions, the supporters of the family arms, the weight of the smaller six hundred ounces, or forty-one pounds, and that of the larger three thousand ounces, or one hundredweight, three quarters, nine pounds, supposed to be the largest piece of plate in Europe.

In the jewel closet is a golden basin and spoon, said to have been used at the coronation of Queen Elizabeth.

There is a brilliant collection of pictures in the house.

The family of the Marquis of Exeter descends from Robert Cyssel, or Cecil, an officer of the court, and in attendance on Henry the Eighth at the celebrated meeting between that monarch and Francis, King of France, on the “Field of the Cloth of Gold.”