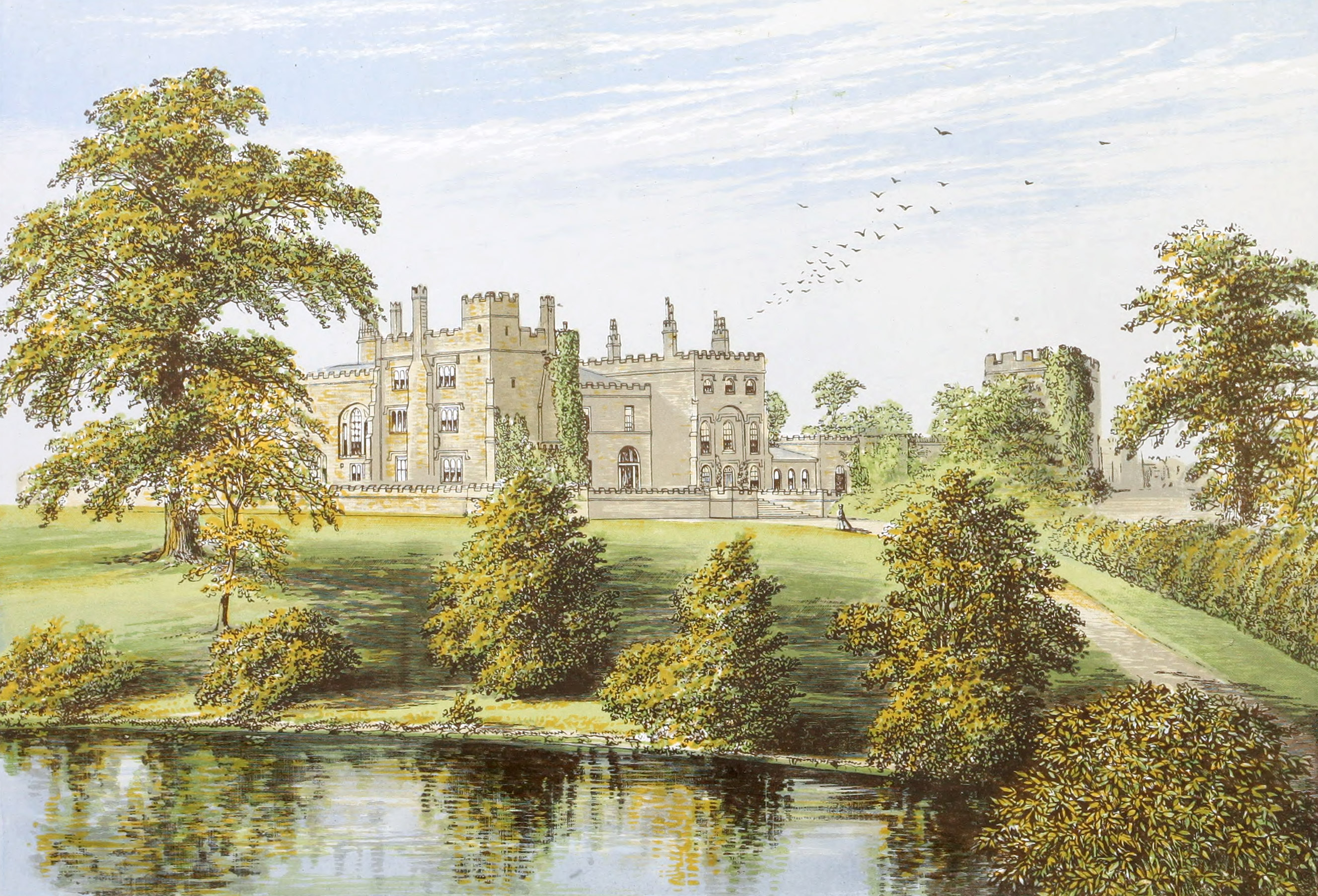 If there is a “model village” anywhere in England, I think it is Ripley, and the richness and beauty of the country around make a fitting frame in which the picture is set.

Ripley Castle is the ancient seat of the baronetical family of Ingilby. It stands on land not far from the river Nidd, the name denoting a pasture on the bank of a stream.

The house is a castellated building, and was erected in the year 1555, as appears from the following inscription carved in the frieze of the wainscot in one of the chambers of the tower:

In the yeire of our Ld. MDLV.,
was this house buylded
by Sir William Ingilby, Knight,
Philip and Marie reigning that time.

It has, however, been much altered and enlarged in the years that have since passed, and the greenhouses and hothouses are said to be scarcely exceeded by any in the kingdom.

On a stained glass window in the principal staircase are exhibited the quarterings and intermarriages of the Ingilby family, during a period of four hundred and forty- three years.

At the entrance of the village on the north side is a school-house, built in the year 1702, over the door of which is the inscription:—

This school was built by Mary Ingilby,
in the year 1702;
and endowed with part of the fortune of
Catherine Ingilby;
being the two youngest daughters of
Sir William Ingilby, of Ripley,
in the county of York, Baronet.

“After the battle of Marston Moor, Cromwell took the route to Ripley, and sent to the castle by an officer, a relation to the Ingilbys, to announce his arrival in that town. Sir William was at that time from home, but his lady, the daughter of Sir James Bellingham, who received the communication, requested that Cromwell might be told, that no such person as himself could be admitted there, adding that she had force enough to defend herself and that house against all rebels. With some persuasion, this heroic lady was at length prevailed upon by her relative to receive the General, which she did at the gate of the lodge, with a pair of pistols stuck in her apron strings; and having told him that she expected that neither he nor his soldiers would behave improperly, she led him to the hall. There sitting or reclining, each on a sofa, in different parts of the room, these two extraordinary personages passed the night, equally jealous of each others’ intentions. At his departure in the morning, this high-spirited dame caused it to be intimated to Cromwell, that it was well he had bebaved in so peaceable a manner, for had it been otherwise, he would not have left that house alive.”

Sir Thomas de Ingilby, about the year 1378, married the heiress of the Ripley family, and with her acquired the estate.

The Baronetcy was conferred on the then possessor in the year 1642, who accordingly became

Sir John Ingilby, died unmarried in the year 1772, when the Baronetcy became extinct; but it was subsequently revived in 1781, in his successor,

Sir John Ingilby. It afterwards became extinct again, and has recently been revived in the person of the

Rev. Henry Ingilby, of Ripley Castle, who has been created a Baronet.

The family of Ingilby deduces from Sir Thomas Ingleby, or de Ingilby, as above stated.