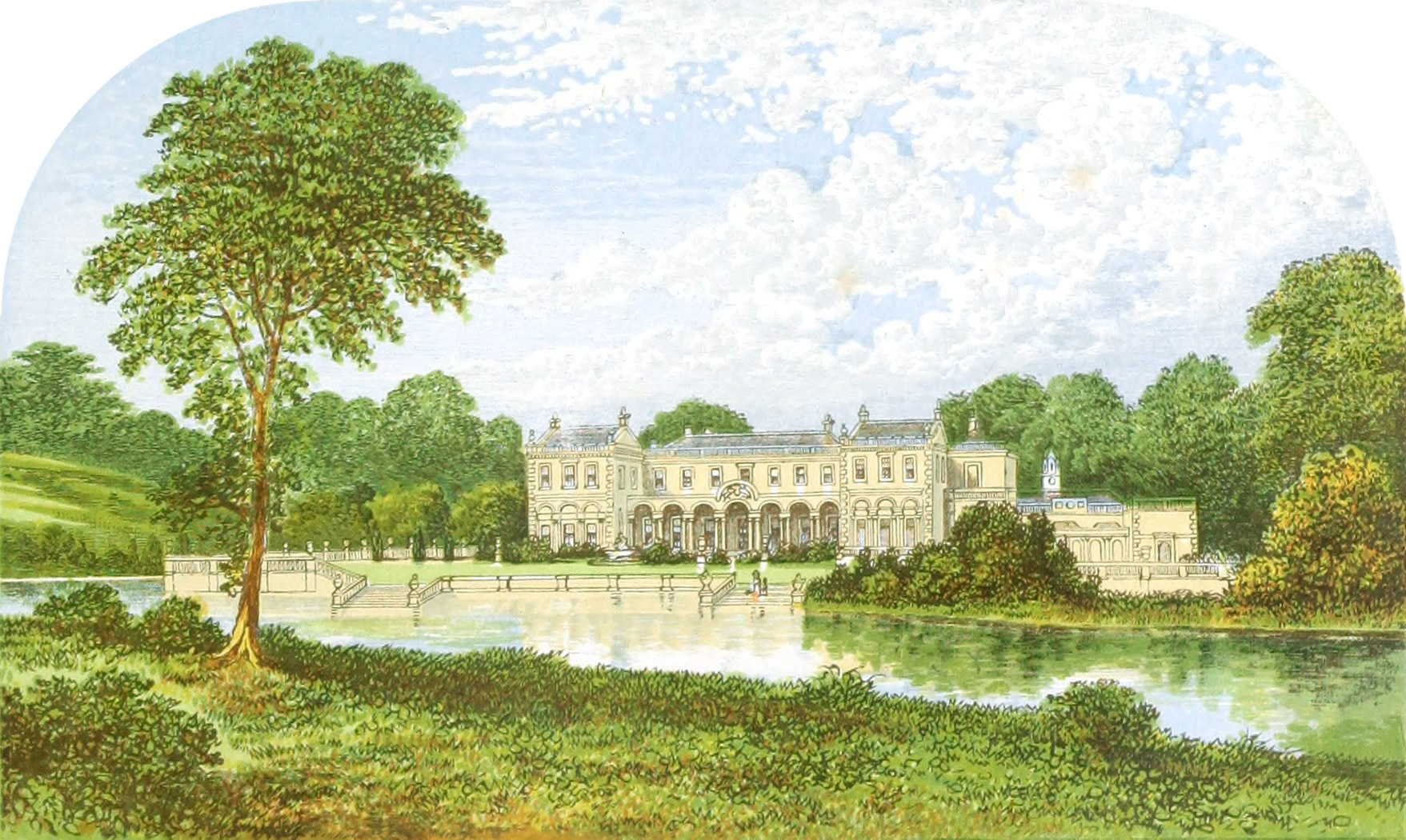 Near Ollerton, Nottinghamshire.—Duke of Newcastle.

The principal rooms in this great house are the state dining-room, sixty feet long, thirty-four feet wide, and thirty feet high: it can accommodate one hundred and fifty guests at dinner, with room to spare. The entrance-hall is very lofty, and the roof supported by columns.

The library of books is stated to be a most valuable collection.

The park is about thirteen miles in circumference. Clumber is named in Domesday Book as having within it before the Conquest two manors of Roger de Buisli, Adel- wool and Ulchill. But to my view the great ornament of Clumber, as of every other country house where there is such, is the fine sheet of water in front of it, on which there is, at least there was when I visited it many years ago, a good-sized frigate, fitted up and rigged in the most perfect manner, not a rope or block wanting or out of place, the handiwork of some old sailor, who had left the perils of the sea to wield his crutch on land, and tell how battles had been fought and won.

The library is of similar dimensions, and last, but not least, so is the kitchen.

There is also a private chapel, four of the windows in which cost £800 each.

Here are, as may well be supposed, pictures and paintings “rich and rare.” One

As to the modern painters, Gainsborough and Sir Joshua Reynolds may be mentioned as having their niches.

Not more than a century ago, in fact within that time, this cultivated park and estate is described as having been “a black heath full of rabbits, having a narrow river running through it.”

The Duke of Newcastle descends from John de Clinton, of Amington, in Warwick- shire, living in the year 1300. He was summoned to Parliament as Baron Clinton of Maxtock, in the county of Warwick, in 1299, February 6th. The descents afterwards were as follows :

Sir John de Clinton, summoned to Parliament four times as a Baron in the reign of Edward the Third.

Sir John Clinton, shared in the triumphs of Edward the Third and the Black Prince, and was also summoned to Parliament.

Henry Clinton, K.G., ninth Earl, who inherited the Dukedom of Newcastle on the death of his Countess’s uncle, Thomas Pelham Holies, who had been so created in 1756, with special remainder to him.