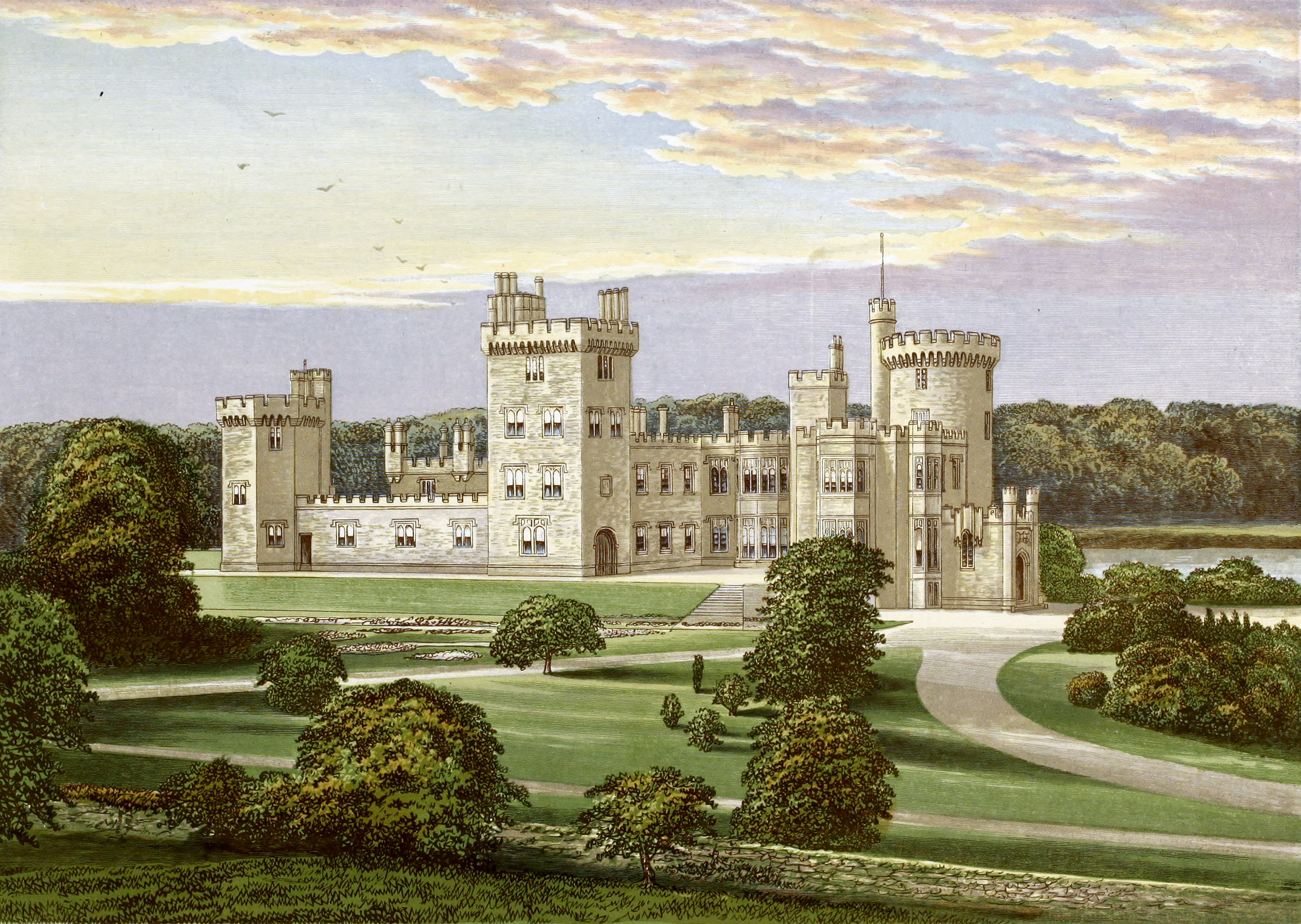 Dromoland Castle is situated about two miles from the ArdsoUus Station, on the Limerick and Ennis Railway.

It is a modern castellated building of chiseled grey limestone, and stands, over- looking a lake, in the middle of a prettily wooded park of over fifteen hundred acres. It is built on the site of an older house of Grecian architecture, which had in its time replaced a more ancient castle. It was begun about 1825, and finished ten years later, by Sir Edward O’Brien, the fourth Baronet, Mr. J. Payne (a pupil of Nash’s) being the architect.

From hills inside the demesne there are extensive views over the Valley of the Shannon and Fergus, the Old Race-course Stand forming a conspicuous landmark in the navigation of the latter river.

The castle contains some interesting relics of ancient times, as well as a good collection of family portraits, and a large library.

Among the pictures may be mentioned a life-sized equestrian portrait in the hall of Donough Carbraic O’Brien, descendant of Brien Borohme, King of Ireland, and ancestor of the O’Brien family: there is an inscription in the corner of the picture,—”Donatus O’Bi’ien, quondam Hibernorum Rex, A.D. 1250.” Also a full-length portrait of Queen Anne, by Sir Godfrey Kneller, given by her to Sir Donough O’Brien, first Baronet, whose eldest son married Catherine Keightley, daughter of Lady Frances Keightley, daughter of the first Lord Clarendon, and aunt to Queen Mary and Queen Anne. Among the other pictures of interest are Queen Henrietta Maria, wife of Charles the First, by Vandyke; portraits of several of the Earls of Thomond and Inchiquin, as well as many of the Clarendon and Keightley families, and also some curious hunting and racing pictures of the last century.

In the hall is a large antique table of curioas manufacture, a relic of the Spanish Armada, which was washed ashore at Miltown Malbay, on the coast of Clare.

There are also in the gallery some curious ancient tablets of bog oak, representing the life and death of Brien Borohme, who was slain at Contarf in A.D. 1010, as well as a bronze effigy supposed to have been at one time fastened on that monarch’s tomb.

The family of O’Brien, of which Lord Inchiquin is the head, is one of the oldest in Ireland. They maintained an independent sovereignty over a large part of the South of Ireland up to a late period, A.D. 1543, when Murrough O’Brien, the then Tanist, or Monarch, resigned his princedom to Henry the Eighth, and accepted the titles of Earl of Thomond and Baron of Inchiquin.