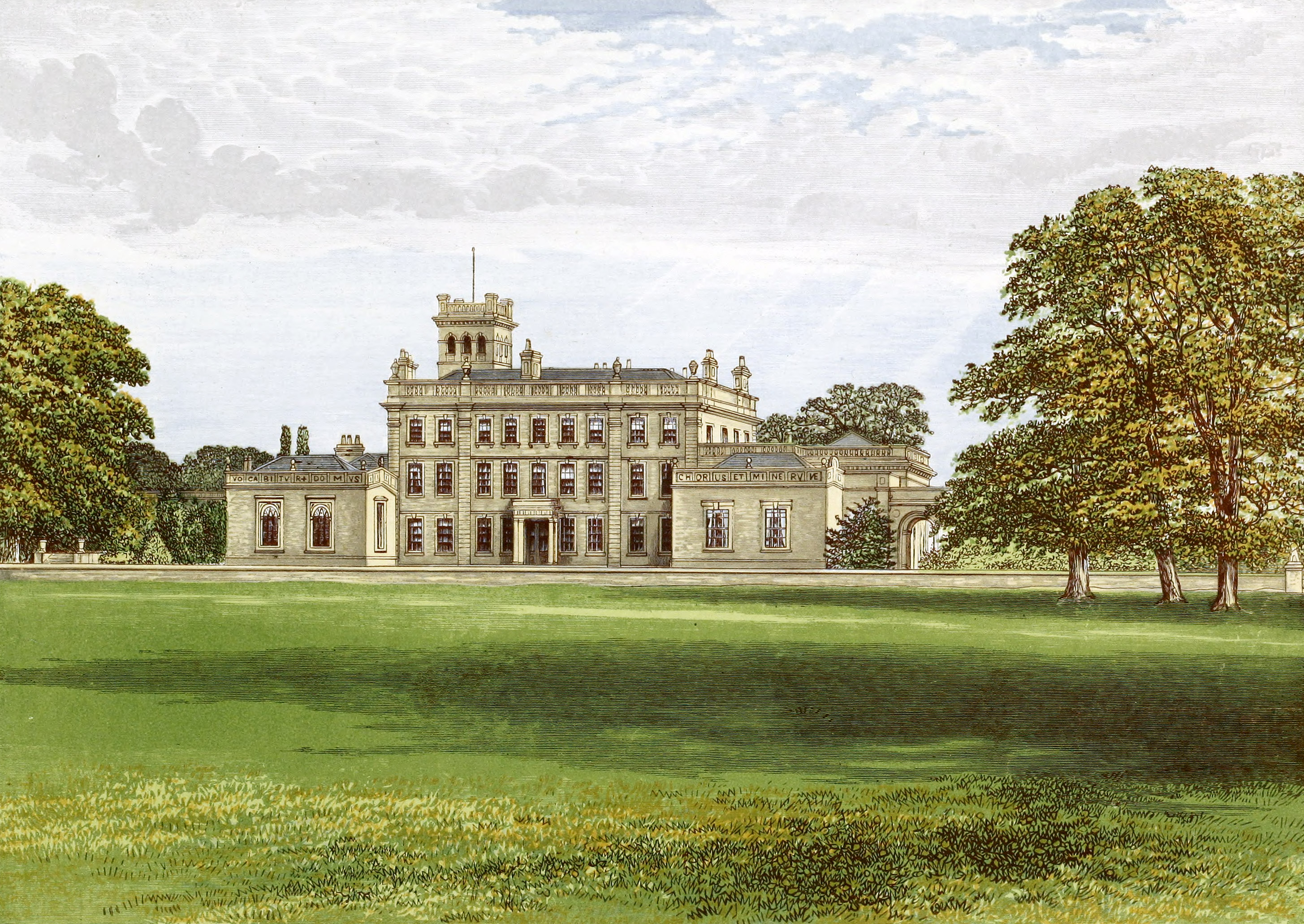 Locko, the seat of William Drury Lowe^ Esq., is one of tlie most charmingly situated mansions in the Midland Counties. It stands in a well wooded deer park about five miles from Derby, and has a magnificent sheet of water at a picturesque distance in front, the drive from the lodge to the mansion passing along its margin, and presenting many points of beauty to the eye of the visitor.

The front of the house, which faces the lake, consists of a central body with portico, and two wings, one of which is the private chapel, and the other the drawing-room. Formerly this front was the principal entrance to the house. The present owner, however, a few years ago, added a new and advanced portico, with entrance-hall, picture-gallery, and dining-room at the east end. The whole of these additions, with a well proportioned tower, are designed in the Italian style, the dining-room facade forming a striking and pleasing front.

The interior of the mansion presents many features of interest. The principal apartments are the picture-gallery, the dining and drawing rooms, the boudoir, the hall, and the chapel, and these are all fitted and furnished with exquisite taste, and hung with a priceless collection of rare old paintings. The two first of these apartments are decorated in the Italian style, and have coved ceilings.

The collection of paintings, which has been collected together with great judgment and at a lavish outlay, during his several years’ residence abroad by the present owner, is said to be one of the most extensive and important, both in point of rarity and value of the diSerent examples, among private collections in the kingdom.

The private chapel, which forms one of the wings of the mansion, was, as appears from an inscription beneath one of its windows, consecrated August 31st., 1673. It is entered both from the house and from the grounds, and is spacious and well arranged. In the interior, besides an elegant stained-glass window, are the Royal Arms, with the date 1669, and the arms of Gilbert and Lowe; and the ceiling, which

is divided into panels, is decorated with crowns, roses, and other devices. On the exterior is the inscription, running round three sides: “1670—domvs mea vocabitvr domvs orationis;” and on the corresponding wing, the drawing-room, is “doctvs & phœbi chorvs et minervæ lavdes.”

The mansion of Locko was founded on, or closely adjoining to, the site of the old

“Lazar-house,” an hospital or preceptory of the Order of St. Lazarus of Jerusalem—“Domus de la Madeleyne de Lockhay ordinis militice Sancti Lazari Jerusalem.” This Lazar-house, or hospital, existed as early as the year 1296. and from it, undoubtedly, even the name of “Locko” is derived. The derivation is from the obsolete French word Loques, signifying ‘rags;’ and some of these old hospitals or Lazar-houses (Lazar being derived from Lazarus) were called “Le Lokes.” Lock thus became synonymous with Lazar-house, and hence the name of “Lock hospital” at present in use.

The family of Lowe is of considerable antiquity in the county of Derby. The first of whom we have any distinct record is

Lawrence Lowe, who, having married for his first wife, the daughter and heiress of Rossell, of Denby, in the county of Derby, inherited that estate and settled there. He was a man of great learning, and held the office of Recorder of Nottingham in the year 1480. His sons,

Humphrey and Thomas, respectively founded the two important families of Lowe of Denby, and Lowe of Alderwasley. Members of the family were in different reigns attached to the court. One of these, who was in holy orders, was Confessor to King Henry the Seventh; and another, Anthony Lowe, was Gentleman of the Bedchamber and Standard-bearer to King Henry the Eighth, King Edward the Sixth, and Queen Mary. From

Humphrey Lowe, of Denby, who was living in 1516, the eldest son of Lawrence Lowe, the family continued in unbroken succession to

John Lowe, who in 1746 purchased Locko Park from the Gilbert family. He died without issue in 1771, and was succeeded by his brother,

Richard Lowe, Esq., who died in 1785, also without lawful issue, when the estates passed to his second cousin,

William Drury, Esq., of London, grandson of Anne Lowe (heiress to the estates), who had married Alderman William Drury, of Nottingham. This successor to the Locko Park and estates assumed the additional surname and arms of Lowe by sign manual in 1790. He married Anne, daughter of William Steer, Esq., of Burton Latimer, by whom he had issue an only child, Mary Anne Drury-Lowe, his sole heiress. Mr. Lowe died in 1827, and his widow survived him till 1849, when she died at Locko in her hundred and fourth year.

Miss Drury-Lowe, the heiress, married, in 1800, Robert Holden Esq., of Darley Abbey and Nuttall Temple, the representative of the old Derbyshire family of Holden, by whom, with other issue, she had a son,

William Drury Holden, Esq., who, upon the death of his maternal grandmother, in 1849, assumed by sign manual the names and arms of Drury-Lowe. Mr. William Drury-Lowe, who was born in 1802, married, in 1827, the Honourable Caroline Esther Curzon, daughter of Nathaniel, second Baron Scarsdale, by whom he had issue.