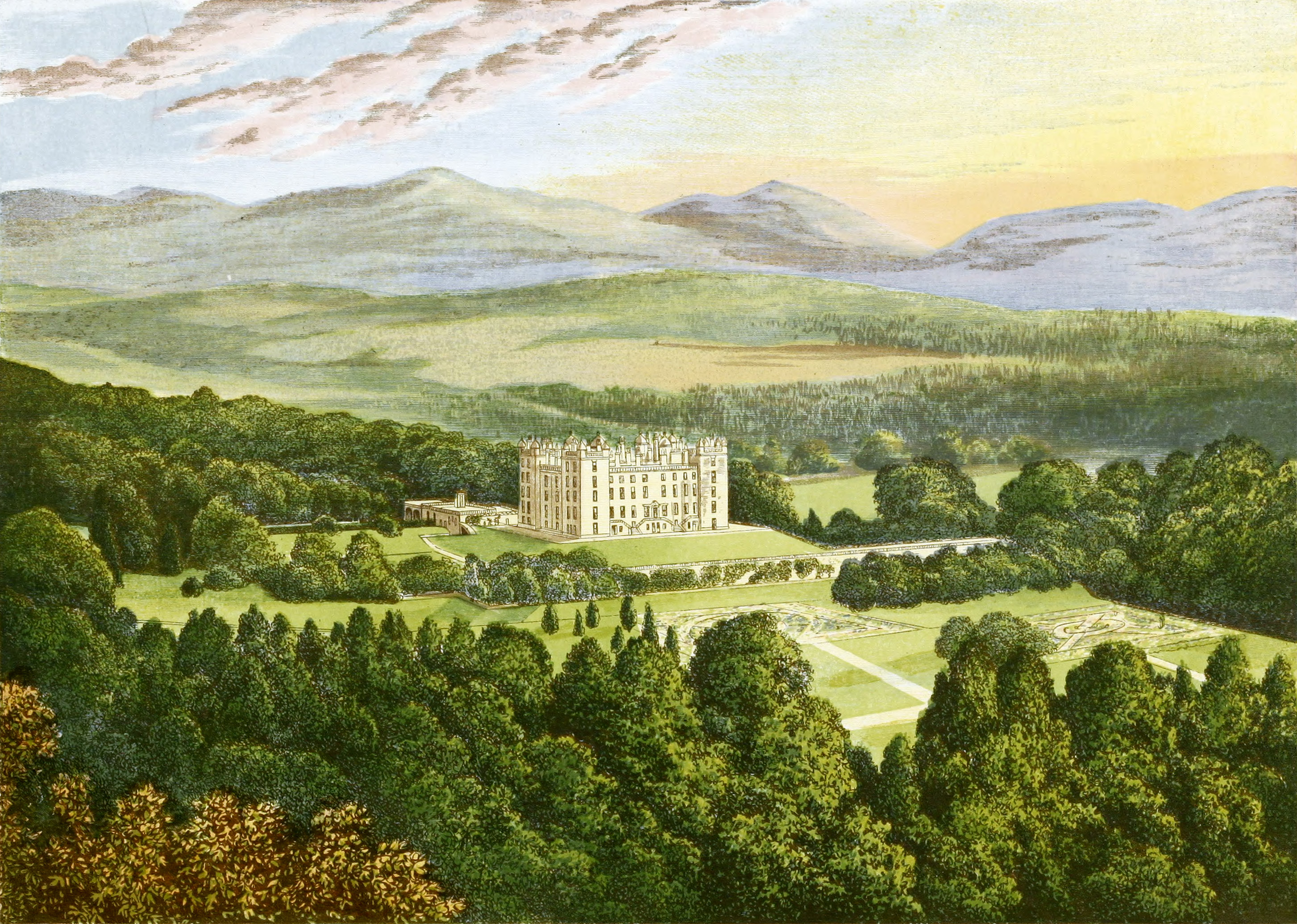 This magnificent seat of the Duke of Buccleuch is situated in tlie parish of Duris- deer, on a knoll of rising ground on the right bank of the river Nith, and for several miles forms an attractive feature in the rich and varied landscape of the picturesque vale through which that river flows.

The Castle is a hollow square, four stories high, surmounted with turrets at the angles. From the inner court staircases ascend at the angles in semicircular towers. On the architraves of the windows and doors is a profuse adornment of hearts and stars, the arms of the Douglases.

The main front is towards the north, but the building has also a noble appearance to the east, combining on each side the aspects of strength and beauty. The architecture is of a Gothic character. This huge castle occupied ten years in building, and was completed in 1689, the year after the Revolution. William, first Duke of Queensberry, planned and completed it, expending upon it enormous sums of money. A defaced portrait of William the Third is still a memorial of this building having been occupied by the Highlanders during their march in 1745.

Drumlanrig was the principal residence of the family of Queensberry; but on the death of Charles, the third Duke, in 1777, leaving no male issue, it passed, along with the titles attaching to the Queensberry family, to William, Earl of March, and upon the death of the latter, in 1810, it went by entail to the Duke of Buccleuch. For a considerable period the castle was unoccupied, greatly neglected, and defaced; but the succeeding proprietor, adopting it as his residence on attaining his majority in 1827, immediately commenced restoring the house and beautifying the grounds around it.

Pennant writes:—“The beauties of Drumlanrig are not confined to the highest part of the grounds; the walks, for a very considerable way by the sides of the Nith, abound with most picturesque and various scenery. Below the bridge the sides are prettily wooded, but not remarkably lofty; above, the views become wildly magnificent. The river runs through a deep and rocky channel, bounded by vast wooded cliffs, which rise suddenly from its margin; and the prospect down from the summit is of a terrific depth, increased by the rolling of the black waters beneath. Two views are particularly fine: one of quick repeated but extensive meanders amidst broken sharp- pointed rocks, which often divide the river into several channels, interrupted by short and foaming rapids coloured witli a moory tint; the otlier is of a long strait, narrowed by the sides, precipitous and wooded, approaching each other equidistant, horrible from the blackness and fury of the river, and the fiery red and black colours of the rocks, that have all the appearance of having sustained a change by the rage of another element”

Thomas Cornwallis, of London, living in 1378, ancestor of the Lords of that name, one of whom, namely,

Charles Cornwallis, third Lord Cornwallis, married Anne, Duchess of Buccleuch, widow of the second Earl and second Duke, and was ancestor of the present ducal family of the name.

The following titles have at one time or other been acquired or inherited by members of this great house:—