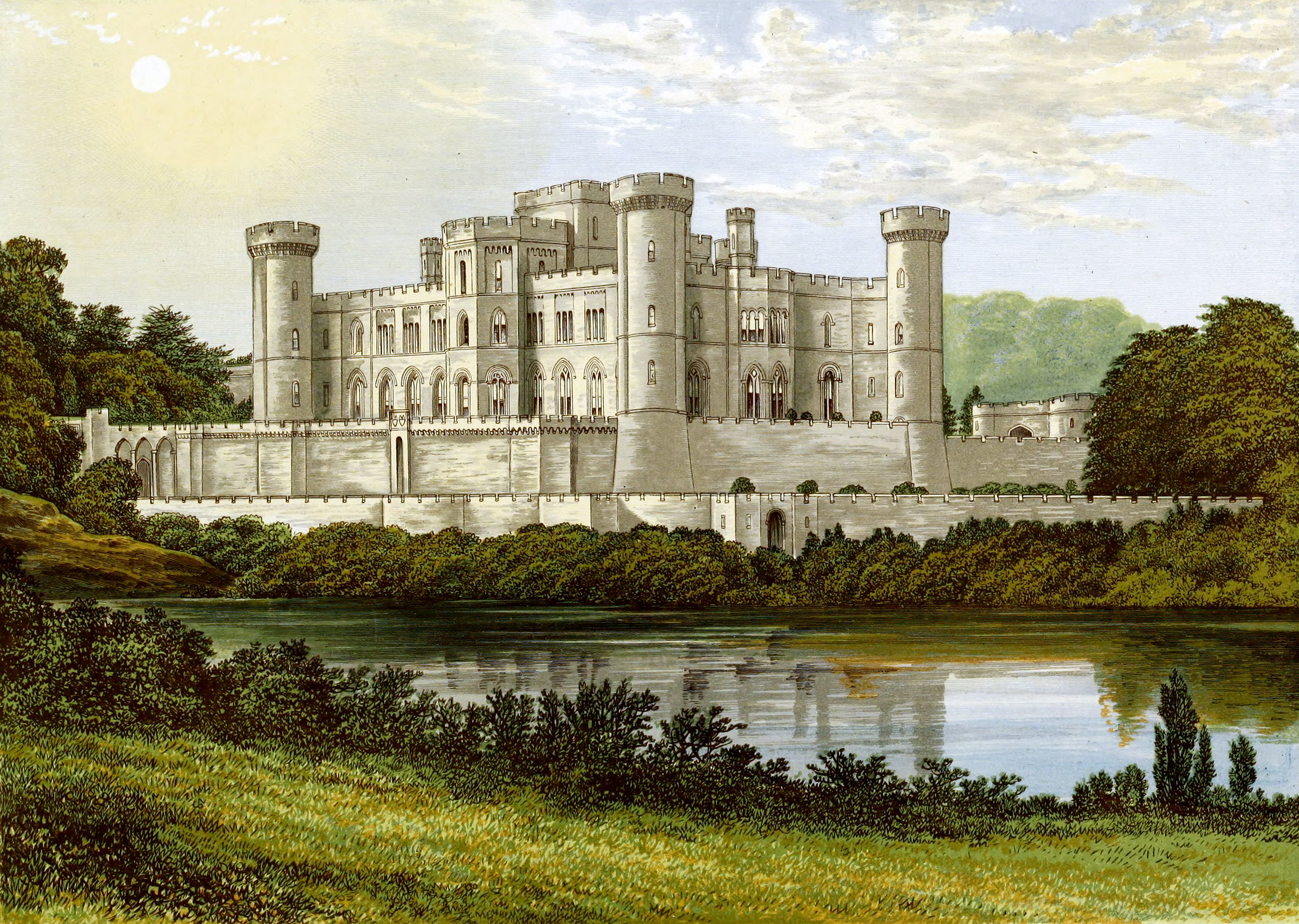 Eastnor Castle was built by Johnj first Earl Somers, and completed in 1815. The designs were given by Sir Robert Smirke^ in the style of the twelfth century.

The castle stands on a rising ground, a little above the site of the old family mansion of Castledich in Eastnor, (in “Domesday,” Esnore,) a moated building of extreme antiquity, and which was besieged on more than one occasion during the civil wars of Charles the First.

The entrance hall, sixty feet in height, is a noble apartment of Norman archi- tecture, ornamented with Italian and other marbles, and containing some remarkable suits of armour of the fifteenth and sixteenth centuries.

The libraries contain a fine collection of books, and are adorned with a suite of Gobelin Tapestries, from the designs of Lucas Van Leyden at the Palace of Fontainbleau.

Among the works of art Is a collection of interesting pictures of the early Italian masters: Saint Catherine, by Giotto; Simono Memmi, and other masters of the fifteenth century. A fine portrait of Charles the First, by Mytens; a Knight in Armour, by Paris Bordone; and Saint Thomas receiving the Girdle, by Francesco Granacci. On the principal staircase are some fine modern pictures by Watts; “Time and Oblivion,” and a portrait of Alfred Tennyson, the Poet Laureate; also portraits of Richard Cocks; Thomas C. Cocks, a devoted royalist; Charles C. Cocks, Ambassador to the Czar in the time of James the First, and his wife, in the ancient Muscovite costume; the Lord Chancellor Somers, by Kneller; William the Third in his youth, a gift of the King; and Charles, Lord Somers, who died in 1806, by Romney.

In the grounds of the castle are fine specimens of coniferge, cedars, pines, and rare plants from Japan and California, well acclimatized.

The park is remarkable for the extreme beauty of the views of the Malvern Hills, the Herefordshire Beacon, the Gloucestershire Beacon, etc.

This family is stated to have been seated in the county of Kent in the reign of Edward the First, and to have removed into Gloucestershire in that of Henry the Eighth.

Charles Cocks, Esq., of Castleditch, M.P. for the City of Worcester in 1692, and for the Borough of Droitwich in seven Parliaments. He married Mary, sister and eventually sole heiress of Lord Somers, Lord High Chancellor of Great Britain, who died in 1716; and was father of

James Cocks, Esq., was slain at St. Cas, on the French coast, in 1758, and having been unmarried, the estates reverted to his uncle,

John Cocks, Esq., of Castleditch, (acquired by marriage with his cousin, Mary, daughter of the Rev. Thomas Cocks). He had twelve children, of whom the eldest son,

John Somers Cocks, second Baron Somers, who was created Viscount Eastnor and Earl Somers, July 17th., 1821. He was Lord Lieutenant of Herefordshire, Recorder of Gloucester, and High Steward of Hereford. His son,

John Somers Cocks, Esq., second Earl Somers, was Lord Lieutenant of Here- fordshire, and Colonel of the Herefordshire Mihtia. He died March 8th., 1838, and was succeeded by his son,