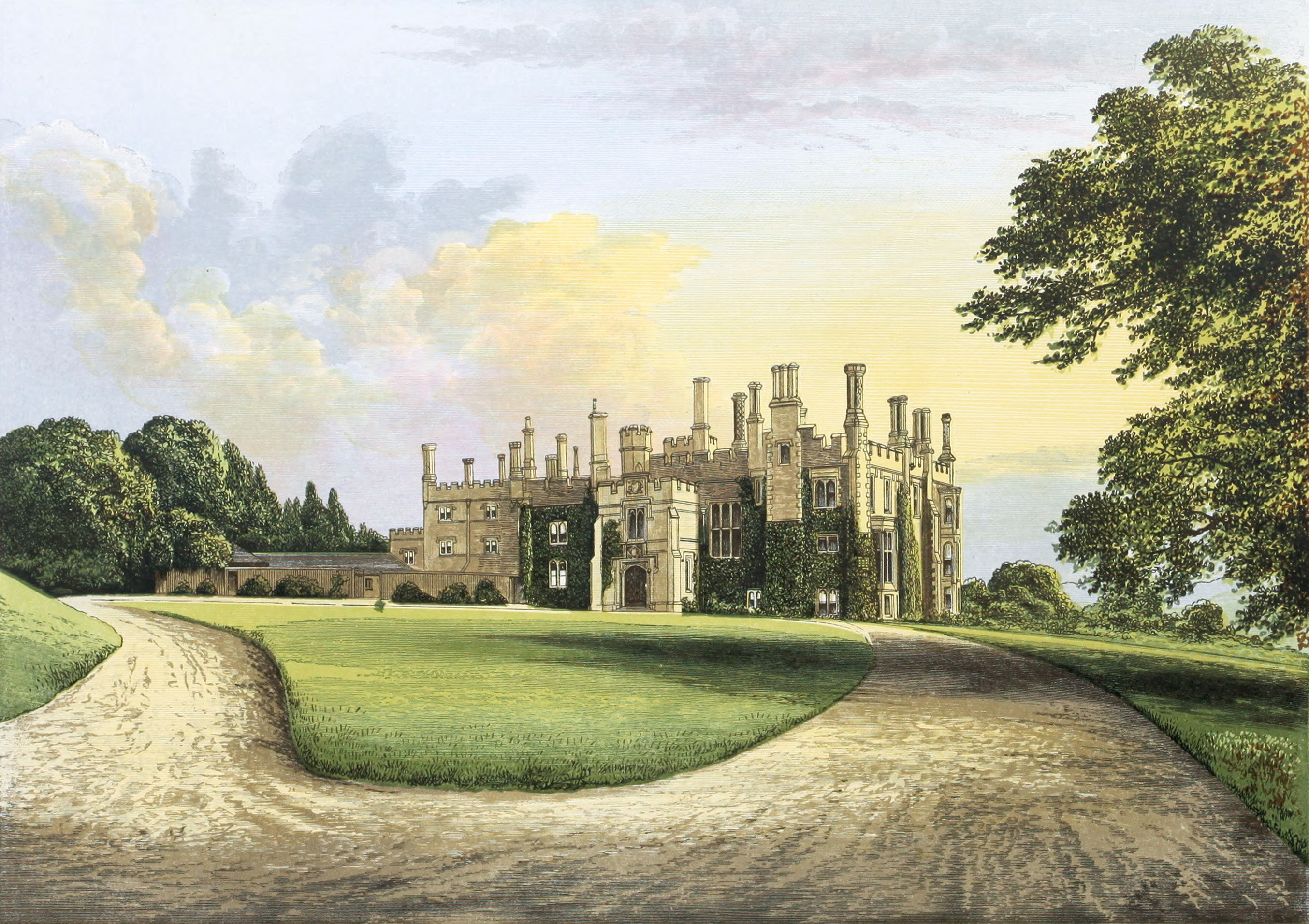 It might well have been in the “Happy Valley” above which this Country House stands, among surrounding hills covered with wood, that Rasselas may be supposed to have meditated, “the world forgetting.” It gives the perfect idea of peaceful seclusion, and the little old church below adds its quaint and becoming feature to the lovely picture.

The name of this very ancient family is plainly derived from the words Wall, or Well, and Hope, a valley, (vallis reductus, long drawn out.)

Peter de Barton, Lord of West Barton, Hampshire, married Alice Wallop, daughter and heiress of Sir Richard Wallop, grandson of Matthew de Wallop, living in the reign of King John. Their grandson, who assumed the name of Wallop, inherited, as

Richard de Wallop, M.P. for Hampshire in the second year of Edward III. He married Alice, daughter of Sir John Husee, Knight, of Betchworth Castle, Surrey, and was succeeded by his eldest son,

John Wallop, who married Margaret Wellington, and was followed by his son,

Thomas Wallop, married Margaret, daughter and heiress of Nicholas Valoynes, Lord of Farley and Clydesden, and was succeeded, at his death, by his grandson,

Richard Wallop, married Elizabeth, daughter and coheiress of — Hampton, of Old Stoke, Hampshire, but having no children, was followed by his brother,

Sir John Wallop, Knight, an eminent military and diplomatic personage in the reign of Henry VIII., installed a K.G. in 1544. He married twice, but had no children, and his estates therefore went, at his decease, to his brother,

Sir Oliver Wallop, Knight, so created for his gallant conduct at the battle of Musselburgh, in 1517. His first wife was Bridget, daughter of — Pigot, of Beechampton, Buckinghamshire, their eldest son being

Sir Henry Wallop, Knight, Vice-Treasurer and Treasnrer-of-War in the reign of Queen Elizabeth, and oue of the Lord Justices of Ireland in 1582. He married Catherine, daughter of Richard Gifford, Esq. Their eldest son,

Sie Henry Wallop, Knight, who married Elizabeth, only daughter and heiress of Robert Corbet, Esq., of Moreton Corbet, Red Castle, and divers other lordships and manors in Shropshire, and at his death, November 5th., 1624, his only son succeeded,

Robert Wallop, Esq., M.P. for Hampshire, and afterwards for Andover. He took the side of the Parliament in the Civil War, and at the Restoration, was imprisoned, January 30th., 1662, for life in the Tower of London, where he died, November 16th., 1667. He had married Anne, daughter of Henry Wriothesley, Esq., of Southampton, and was followed by his son,

Henry Wallop, Esq., M.P. for Whitchurch, in the first Parliament of Charles II. He married Dorothy, youngest daughter and coheiress of John Bluet, Esq., and dying, January 25th., 1678-9, was succeeded by his eldest surviving son,

John Wallop, Esq. This gentleman married Alicia, daughter and coheiress of William Borlase, Esq., of Great Marlow, in the county of Buckingham, and at his death, in 1694, was followed by his son,

Bluet Wallop, Esq., who dying, unmarried, in 1707, the estates went to his brother,

John Wallop, Esq., born April 15th., 1690, created Baron Wallop, of Parley Wallop, in the county of Southampton, and Viscount Lymington, June 11th., 1720, and further advanced to the dignity of Earl of Portsmouth, April 11th., 1743. His Lordship married, first, in 1716, Bridget, eldest daughter of Charles, Earl of Tankerville, and had six sons and three daughters. The eldest son,

John Wallop, Lord Lymington, born August 3rd., 1718, married, in 1740, to Catherine, daughter and coheiress of John Conduit, Esq., (whose wife was a niece and one of the coheiresses of Sir Isaac Newton.) He died in his father’s lifetime, November 23rd., 1762, and his son accordingly came to the title,