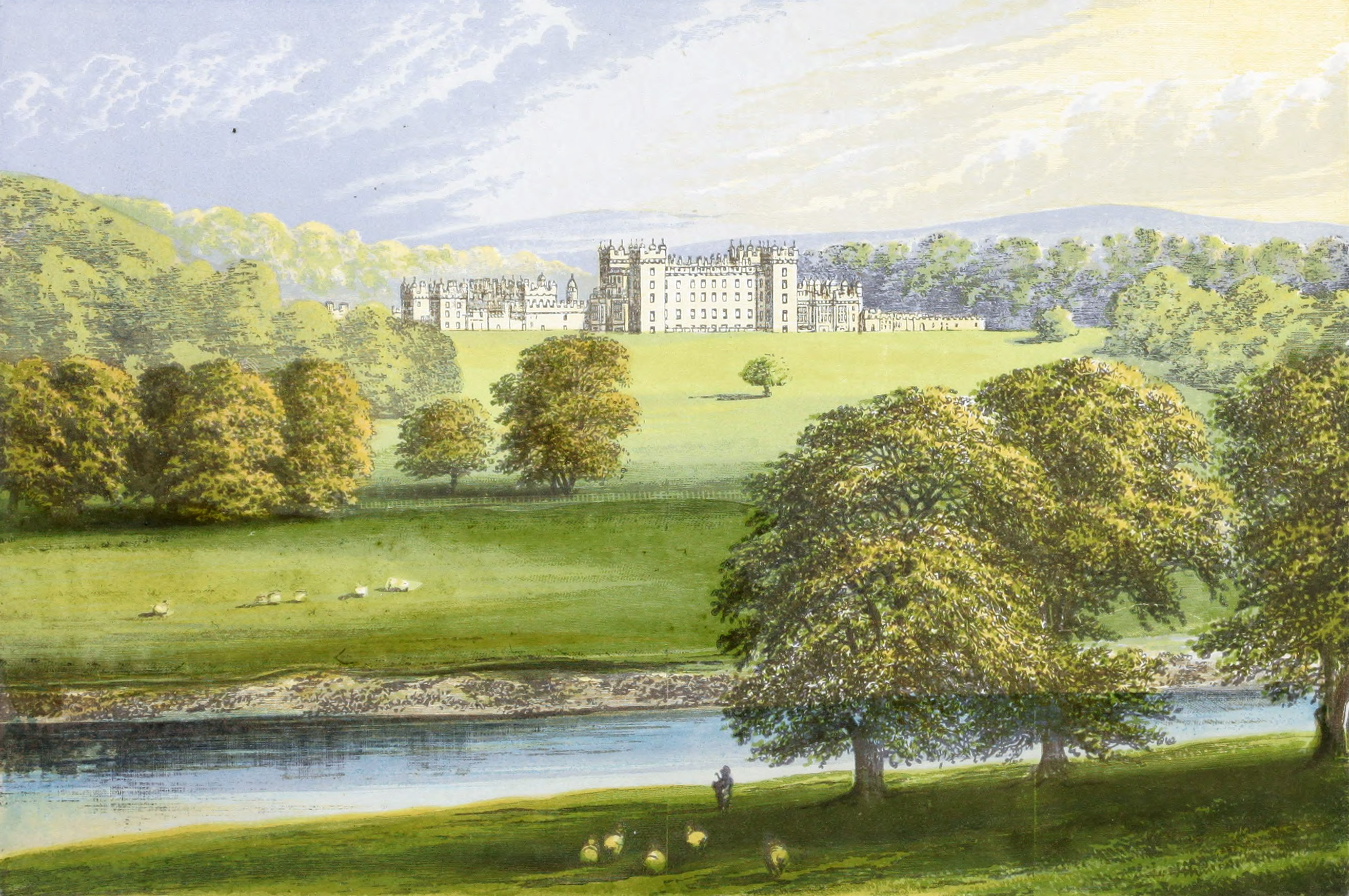 Near Kelso, Roxburghshire.—Duke of Roxburghe.

Having seen more or less of some of the Seats which I have already briefly described, as well as of many others, there is none which struck me, when I saw it some years ago, as more beautifully situated than the grand ducal residence of Floors, which I had frequent opportunities of admiring when on a salmon-fishing expedition to the Tweed. The kind friend who had invited me to stay a fortnight with him and his family at Kelso, on their way back from a tour in Scotland, is now no more, but all the recollections of a very pleasant visit still remain, and as they were lodging at the house of the Duke’s steward, which was close to the park grounds, I saw the place to every advantage.

The name of Floors is derived, it is said, from its standing on a natural floor or terrace, overlooking a plain of extensive meadowland, which reaches down to the Tweed, at the spot where the Teviot joins it, both rivers then in one winding beautifully through the estate directly in front of the house, till they flow together under Kelso bridge, a noble stream of water, the very home of the salmon after his journey to the sea.

To the south is a lovely view, embracing a prospect of eight or nine miles over Teviotdale, a rich and picturesque valley, worthy of its poet, Sir Walter Scott, and the scene is bounded by the lofty eminences of the Cheviot Hills and the “Border Land” of Northumberland.

In this park King James II. of Scotland met his death by mischance, through the bursting of a cannon, while engaged in superintending the siege of the Castle opposite, and a holly tree, enclosed within rails, still marks the spot where the catastrophe occurred. His successor, James III., was proclaimed King, and crowned with military pomp a few days afterwards in the neighbouring town of Kelso.

The house, which is a magnificent pile of building, was erected in the year 1718, by John, first Duke of Roxburghe.

John, the third Duke, who succeeded to the title in 1755, collected a rare library of old English literature, especially in the department of the Drama, and at its sale, in 1812, the literary society known by the name of the Roxburghe Club was established in memorial of this valuable collection.

Floors Castle was honoured with a visit from their Royal Highnesses the Prince and Princess of Wales at the latter end of the year 1865.

The ducal family of Roxburghe derives from Sir James Innes, Bart., of Innes, who married Margaret, third daughter of William, Lord Ker, second and surviving son of Sir Robert Ker, of Cessford, created Lord Roxburghe in 1600, and Baron Ker of Cessford and Cavertown, Earl of Roxburghe, in 1666.

Of the family of Innes, it is stated by Duncan Forbes, in a MS. account, that in all their long line “their inheritance never went to a woman; that none of them ever married an ill wife; and that no friends ever suffered for their debts.”