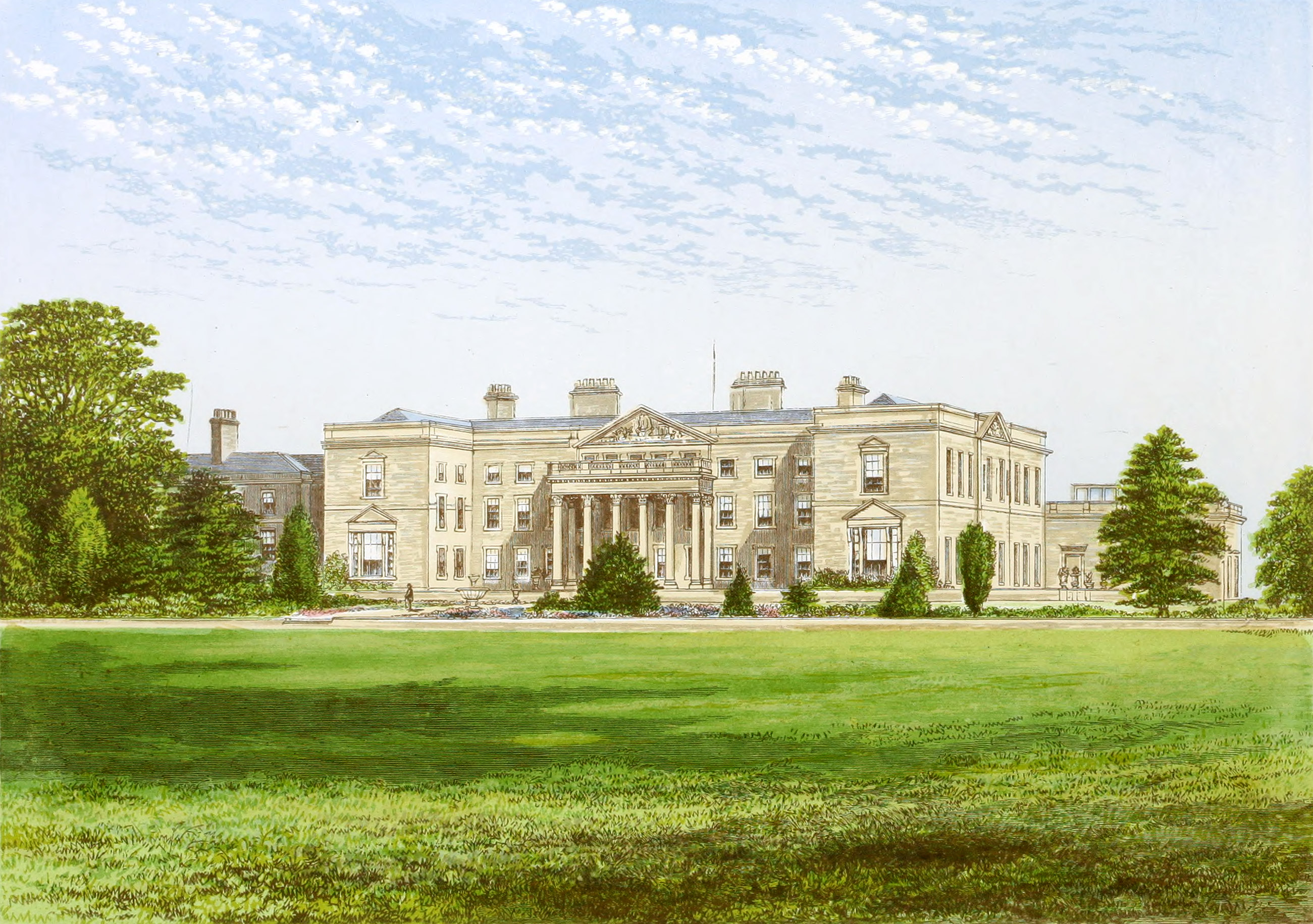 This well-known and magnificent seat is acknowledged to be one of the chief ornaments of the county of Leicester, in which it is situated.

It is about three miles north-west of Market Bosworth, and stands in a park of nearly six hundred acres. It was originally built by Charles Jennens, Esq., in the year 1758, at a cost of £100,000 when completed.

“The south front has an extremely imposing aspect. Corinthian pillars support a frieze and balusters of very graceful design, while a receding pediment bears in relief a sculpture of a ship in a storm, with a haven in the foreground, and the appropriate inscription, Fortiter occupa portum. This beautiful addition to the archi- tectural features of Gopsal was introduced to commemorate the naval victories of

Lord Howe. The wings of this front form, respectively, the chapel and library.

The principal entrance is on the north.

The whole of the interior is a combination of elegance and comfort too seldom found in the mansions of the nobility.

The library contains a very fine collection of rare works. A fine stained glass window, the painting of which was executed by the late Baroness Howe, is a much- admired ornament of this splendid room.

The chapel may vie with any private chapel in England, either in chasteness of design or appropriateness of fitting. Every portion of the woodwork is of cedar of Lebanon, save the carved legs of the Communion Table, which are formed of the Boscobel oak. Vandyke’s painting of the Crucifixion adorns the chapel, and the hall abounds in choice works of the old masters.”

It was here that Handel composed his “Messiah,’ and it is stated to have been very much owing to the then proprietor of Gopsal that that noble composition was given to the world.

An intelligent tourist, T. R. Potter, Esq., gives the following account of this place:—”Every step you take at Gopsal shows that the arts have been not only fostered but cultivated here. Every walk in the neighbouring parishes, portions of this splendid domain, shows some church, bede-house, or school, erected and supported by the munificence of the Curzons, while the numerous tenantry and peasantry on the estates show, both by their appearance and their conduct, how much their welfare is the object of their landlord’s solicitude.”

Mr. Jennens died in the year 1773, and devised the estate to the Honourable Penn Assheton Curzon, his granduephew, who wedded Lady Sophia Charlotte Howe, who became at the decease of her father, Baroness Howe, and so brought that title into the family of Curzon.

The family of Lord Howe derives in the male line from

Giealinb de Curzon, living about the time of the Conquest, who held the manor of Locking, in Berkshire, and that of Fishead, in the county of Oxford.