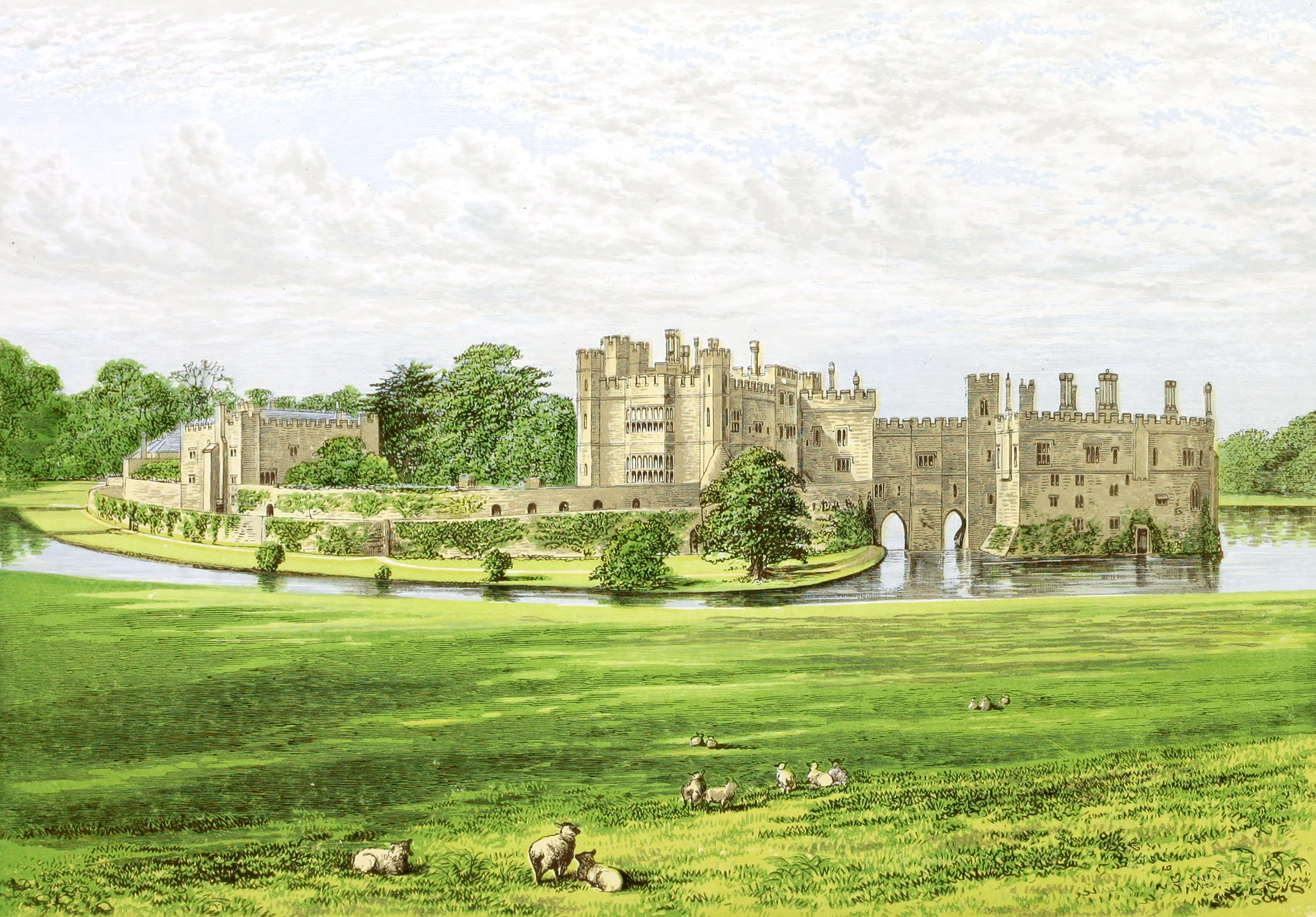 This remarkably fine seat is surrounded by a wide moat, containing nearly twelve acres of water, and the buildings themselves occupy about three acres more.

The original castle was built by

Robert de Crevecœur, on whom it was bestowed by William Rufus. It was, however, ere long forfeited to the crown, and came into the possession of

William de Leyborne, by whom it was surrendered to the king, the donor making, as it should seem, a merit of necessity. It was next granted by the then king to

Lord Badlesmere, who ungratefully joined the Earl of Lancaster in his attempt to put down the royal favourite, Piers Gaveston. As if this was not enough cause of offence, his wife, Lady Badlesmere, refused the demand of Queen Isabella for hospi- tality at the castle for one night, and some of the royal servants were killed in endeavouring to force an entrance. She came with a very large retinue, and it was feared with the intention of taking the castle. Edward in consequence besieged the castle, starved it out, hanged the castellan, and committed Lady Badlesmere and her family to the Tower. The next year Lord Badlesmere himself shared the fate of his subordinate, and was hanged at Blean, near Canterbury, his head being then struck off, and fixed upon Bargate in that city.

The damage which the castle had sustained during the siege was repaired by Walter de Wykeham.

In the reign of Henry the Fifth, the monarch imprisoned here his mother-in-law, Joan of Navarre, for her traitorous attempt against his life. On his death-bed he restored it, and the tone of the document proves the accusation to have been false.

Here, too, the Duchess of Gloucester was tried for witchcraft and sorcery.

Sir Richard Smyth, who died there in the year 1628, and his daughters and coheiresses alienated the castle to

Cheney, sold it to his cousin,

Robert, seventh Lord Fairfax, had the honour of entertaining George the Third at Leeds Castle, and on his death in 1793, the property devolved, in default of direct heirs, on his lordship’s nephew,

The Rev. Denny Martin, whose successor,

General Philip Martin, was followed in the possession of the estate by his kinsman,

Fiennes Wykeham, Esq., who assumed the additional surname of his predecessor, and was father of the next owner,

Charles Wykeham-Martin, Esq., who was succeeded by his son.

The oldest part of the castle, as it appears at present, is the cellars, erected probably in the time of Henry the Third. One window in the kitchen is supposed to be temp. Stephen. At one period there was a Norman entrance to them, formed by a plain semicircular work of Caen stone, but which was covered up in 1822, when the southernmost of the two great divisions of the castle was pulled down and rebuilt. A drawbridge originally supplied the means of communication between the old castle and this part of the building; but it was long ago replaced by timbers fixed and floored, which, at the time of the alteration just mentioned, were in their turn taken away, and a stone bridge of two arches substituted in their place. A great part of the building dates unquestionably from the reign of Edward the First, others from that of Edward the Third, and a very great portion was built by Sir H. Guildford in the reign of Henry the Eighth.

The family of Wykeham-Martin deduces from Richard Wykeham, Esq., of Swalcliffe, living in the early part of the eighteenth century, (representative of the ancient house of which was Sir Ralph Wykeham, in the time of King John, and William of Wykeham, the founder of Winchester College and New College, Oxford,) father of

The Rev. Robert Wykeham, whose son,

Fiennes Wykeham, Esq., assumed the additional surname of Martin in 1821.