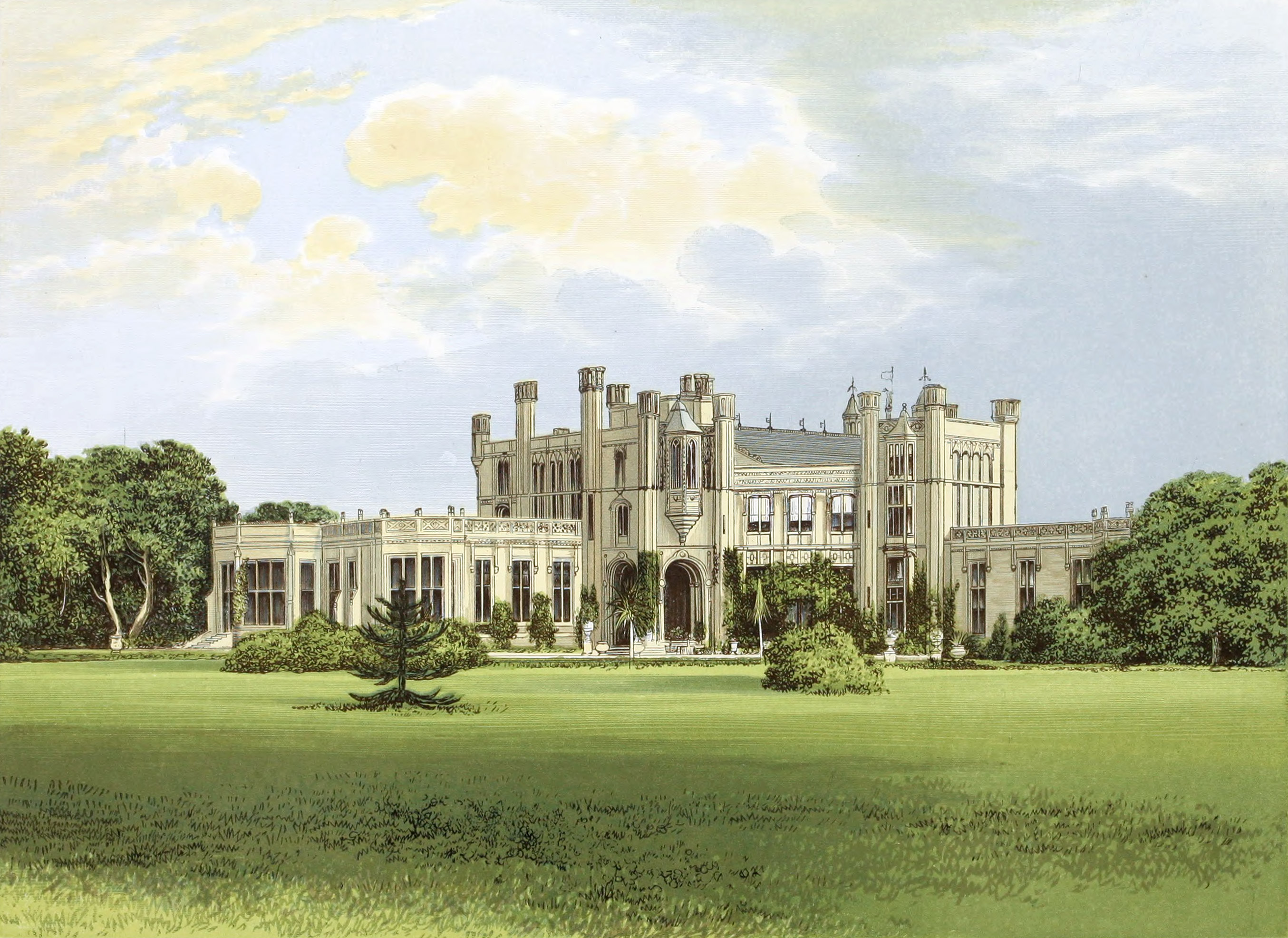 Near Christchurch, Hampshire.—Marchioness of Waterford.

“High Cliffe, environed in a dense fir wood, presents a quaint combination of architecture. The interior contains some fine old carving brought from Normandy. Here are two good tapestries (subject, the Massacre of St. Bartholomew,) in the Drawing-room.”

John de Beresford was seized of laud in Baresford, Staffordshire, in the year 1087, his son being

Hugh de Beresford, from whom descended

John Beresford, Lord of Beresford and Ensou, who married Elizabeth, daughter of William Basset, of Blore, Staffordshire, aud had, with other issue,

Thomas Beresford, seated himself at Newton Grange, Derbyshire, and served in the French Wars of Henry VI. He married Agnes Hassal, daughter and heiress of Robert Hassal, Esq., of Arcluyd, in Cheshire, and had sixteen sons and five daughters, of whom the sixth son,

Humphrey Beresford, Esq., eventually became of Newton Grange, and married Margery, daughter of Edmund Bordesley, or Beresley, Esq., and was succeeded by his second son, the eldest having only left a daughter,

Michael Beresford, Esq., of Oxford, living in 1574, married Rose, daughter of John Knevitt, Esq., and had seven sons and four daughters, of whom the third son,

Tristram Beresford, settled at Coleraine, in Ireland, in the reign of James I., and was succeeded by his elder son,

Sir Tristram Beresford, of Coleraine, M.P. for Londonderry in 1661, created a Baronet of Ireland May 5th., 1665. He married, first, Anue, eldest daughter of John Rowley, Esq., of Castleroe, in the county of Londonderry, and their eldest son, of three, succeeded him at his death, January 15th., 1673,

Sir Tristram Beresford. This gentleman commanded a regiment of foot against .James II., and was attainted by the Parliament of that monarch. He married, in 1(387, Nichola Sophia, youngest daughter and coheiress of Hugh Hamilton, Baron of Gleuawley, and at his death, June 16th., 1701, his only son became

Sir Marcus Beresford, who married, July 16th., 1717, Catherine Poer, Baroness Le Poer, daughter and heiress of James, third Earl of Tyrone, and by that alliance was raised to the Peerage of Ireland, November 4th., 1720, as Baron Beresford, of Beresford, in the county of Cavan, and Viscount Tyrone, and further created Earl of Tyrone, July 18th., 1746. His Lordship died April 4th., 1763, and was succeeded by his eldest son,

George De La Poer Berespord, second Earl of Tyrone, born January 8th., 1735, and married, in April, 1769, to Elizabeth, only daughter and heiress of Henry Monck, Esq., of Charleville. He inherited the Barony of De La Poer at the death of his mother, July 27th., 1769, and was enrolled among the Peers of Great Britain, August 21st., 1786, as Baron Tyrone, of Haverfordwest, in the county of Pembroke, and created Marquis of Waterford, in the Peerage of Ireland, August 19th., 1789. He died December 3rd., 1801, and was followed by his eldest son,

Henry De La Poer Berespord, second Marquis of Waterpord, K.P., P.C., Governor of the county of Waterford, and Colonel of the Waterford Militia, born May 23rd., ] 772, married, August 29th., 1805, to Susanna, only daughter and heiress of George, Earl of Tyrconnel. He died July 16th., 1826, and was succeeded by his eldest son,

Henry De La Poer Berespord, third Marquis of Waterford, K.P., born April 26th., 1811, he married, June 8th., 1842, Louisa, second daughter and coheiress of Charles, Lord Stuart de Rothesay, but had no children. He was killed by a fall from his horse, March 29th., 1859, and was succeeded by his brother, (leaving by will Ford Castle, in Northumberland, to his widow for life, who also inherited High Cliffe, in Hampshire, from her mother,)

John Henry De La Poer Beresford, fifth Marquis of Waterford, born May 21st., 1844, K.P., M.P. for the county of Waterford before his accession to the title, Lord Lieutenant of the county of Waterford, Honorary Colonel of the Waterford Militia, and Captain in the First Life Guards. He married, first, Florence Grosvenor, second daughter of Major George Rowley, by whom he had no children. She died April 4th., 1873. He married, secondly, July 21st., 1874, Lady Blanche Elizabeth Adelaide Somerset, only daughter of the Duke of Beaufort, and had, with other children,