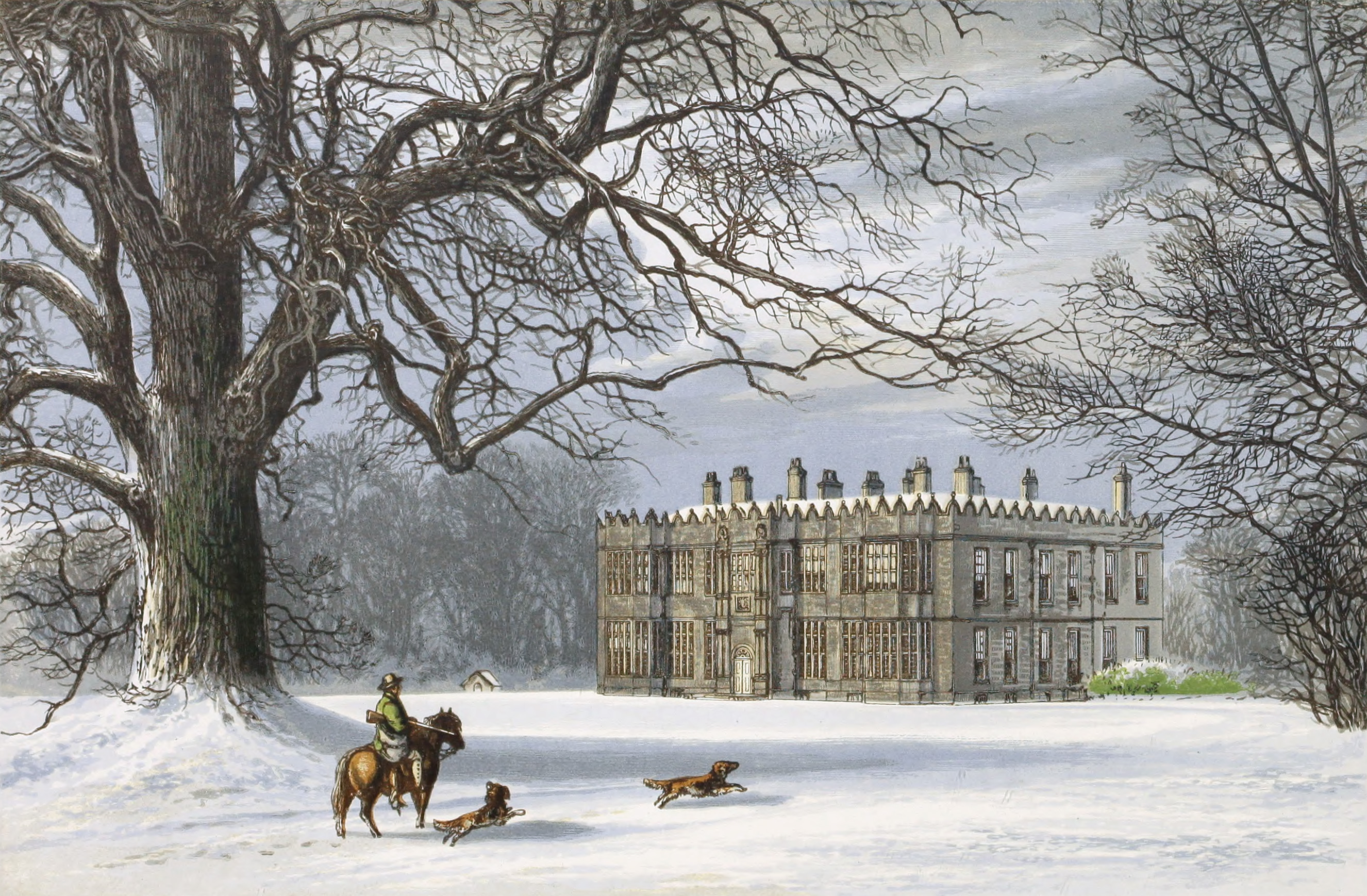 Howsham Hall, built, according to tradition, of stone brought from the neighbouring Abbey of Kirkham, is very pleasantly situated on the south bank of the River Derwent, in a beautiful part of the valley about eight miles from Malton, and twelve from York. The winding river, with its hill-side woods, combine in giving a charming character to the local scenery, as any one will say who takes the private path that leads from the old grey mansion to the high grounds above Westowe, which afford an extensive and majestic view over a richly-wooded country, including the great plain of York, up to the West-Riding hills beyond Ripon, the district of Crayke, Castle Howard, and the North Yorkshire Moors, and on the other side part of the Wolds, Malton, and the country on to Scarborough.

This seat formerly belonged to the great Yorkshire family of Wentworth, and passed by marriage to the Cholmleys of Whitby Abbey.

The style of the architecture of the house appears to belong to the latter part of the reign of James II., but the building is stated to have been erected about the time of Queen Elizabeth.

Like most other old mansions, Howsham has its legend, being said to have been laid under a malison by St. Hilda, which story probably had its origin in the remarkable words of Sir Henry Spelman on the history of sacrilege, which were written to shew that the possession of church property entails, if one may say so, a failure of male heirs; and singular as the coincidence may appear in a vast number of instances, it is no less true as a matter of fact and melancholy history in many.

The whole of the building is surmounted by a curious ornamented parapet; over the front is a shield containing the four quarterings of the Cholmleys.

The family of Cholmley, now extinct in the male line of this branch, is descended from the ancient family of Cholmondeley, of Cholmondeley, in Cheshire, and the contraction of the name is stated to have taken place about the time of Henry VII. or Henry VIII. One of its members, Sir Hugh Cholmley, in the time of the civil war, bravely defended the Castle of Scarborough for more than twelve months against the Parliamentarian Army, and, during the whole time of the siege his lady remained with him in the castle, and attended the sick and wounded. At length, having surrendered on honourable terms, in 1645, Sir Hugh and his family went into exile; his estates were sequestered, and his seat at Whitby converted into a garrison, and plundered of everything valuable by the Parliamentarian troops. He continued in exile till 1649, when his brother, Sir Henry Cholmley, found means to appease the Parliament, and he was permitted to return to England. About the middle of the last century the family left their ancient seat at Whitby, which is situated on a hill on the west side of the town, between the church and the ruins of the Abbey, only a small part of which remains, and made Howsham their chief country residence. Nathaniel Cholmley, Esq., of Howsham, betook himself early to the profession of arms, and had his horse killed under him at the battle of Dettingen; but on the death of his father he retired to his paternal estate, and represented successively the towns of Aldborough and Boroughbridge in Parliament.

He was succeeded by the late Colonel George Cholmley, the last of his race, of whose uniform kindness and hospitality the author of the present work would be very forgetful, if he did not pay a willing tribute of grateful recollection to his memory.

A very handsome church for the hamlet of Howsham, which possessed none before, has been erected within the last few years at the sole cost of Mrs. Cholmley, his widow.

There are a number of fine and valuable portraits and other paintings at Howsham, among which are the following:?Sir William and Lady Anne Twisden, by Gerard. James Butler, Duke of Ormond, godfather of Lady Elizabeth Wentworth, by Lely. Sir Richard Cholmley the Black Knight, by Zucchero. Sir Hugh Cholmley, Governor of Scarborough Castle, by Lely. Sir Hugh Cholmley, of Whitby, fourth Baronet, Governor of Tangiers, by Lely. Hugh Cholmley, of Whitby and Howsham, by Jervais. Catherine, wife of Hugh Cholmley, Esq., only daughter of Sir John Wentworth, by Jervais. Nathaniel Cholmley, of Whitby, by Riley. Henrietta Catherine, daughter of Stephen Croft, Esq., second wife of Nathaniel Cholmley. Colonel George Cholmley, (the late.) Mrs. Hannah Cholmley, daughter of John Robinson Foulis, Esq., of Bucton Hall and Heslerton Hall, Yorkshire. George Cholmley, Esq., (late Grimes.) Mary, wife of Nathaniel Cholmley, Esq., and her three children, by Sir John Medina. Charles I. and child, by Vandyke. Henrietta, wife of Charles I., and child. William III. Mary II. James II. in buff armour, by Nicholas de Largilliere. Sir Henry Spielman. James Stuart, Duke of Richmond, and the dog that saved his life, by Vandyke. Virgin and Infant, by Corregio. Charles I. on horseback, by Vandyke.

There is besides a most curious and valuable series of eight ancient Spanish pictures, supposed to have come into the possession of Sir Hugh Cholmley, of Tangiers, from a captured Dutch vessel, and originally mounted on cotton. They were brought from Whitby to Howsham. 1. Spanish Soldiers entering Tabasco, led by Geronimo de Aquila. 2. Cortez' arrival at Vera Cruz. 3. Cortez' reception at Xoloc by Montezuma. 4. Montezuma killed by the Indians, who also set fire to the houses of the Spaniards. 5. Cortez leaves Mexico pursued by the Indians. 6. The capture of the Mexican Royal Standard. 7. The last combat in Mexico by Cortez and his soldiers. 8. Guatemozin, last King of Mexico?people trying to escape in canoes?taken by the Spaniards, which ended the siege.

The family of Cholmley deduces from Richard le Belward, whose younger grandson, Robert le Belward, having had the lordship of Cholmundeleih, otherwise written Cholmondeley and Calmundelei, given him by his father, assumed that name in lieu of his own.