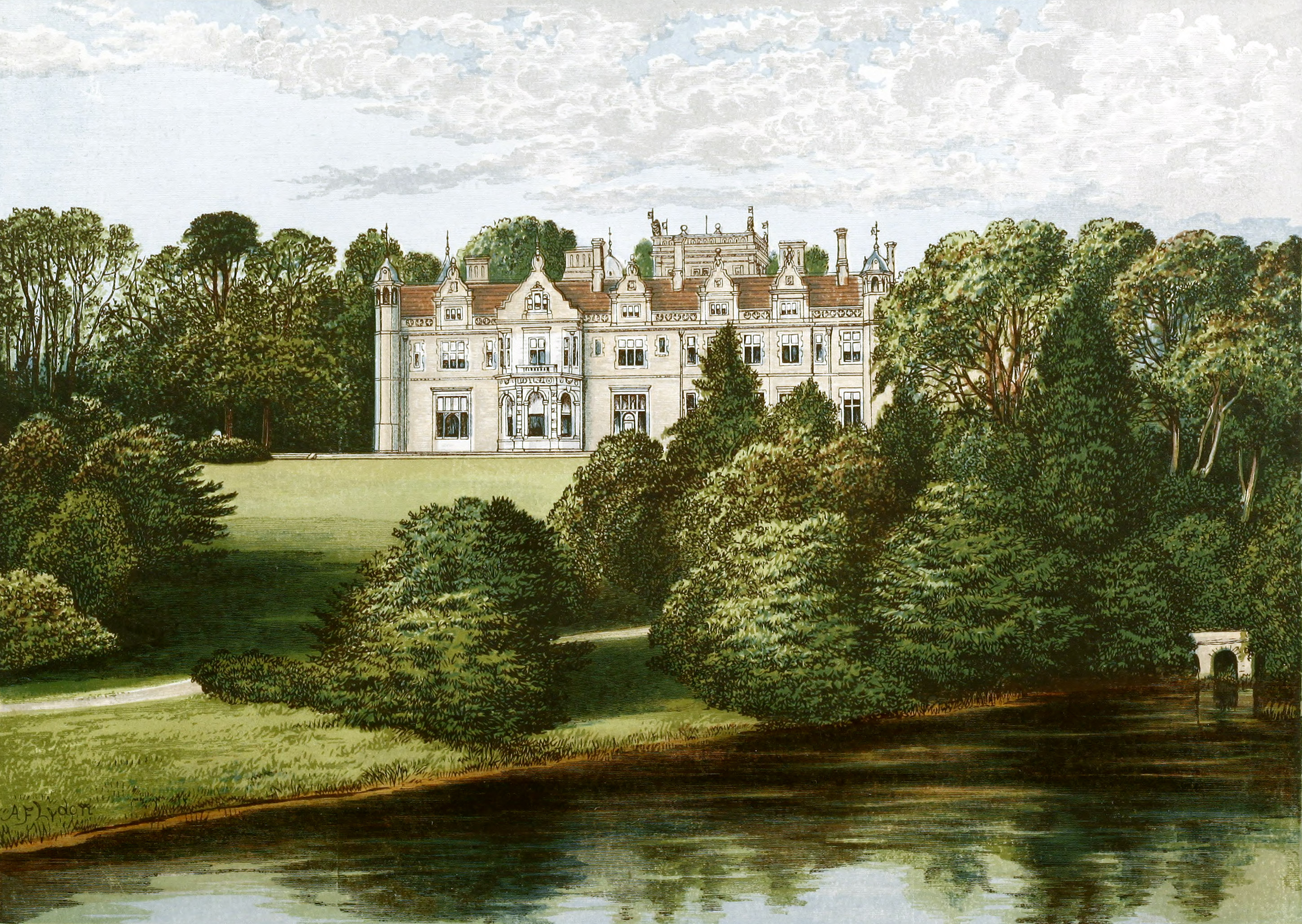 The Manor of Keele was granted by King Henry the Second^ A.D. 1180, to the Knights Templars, and on the suppression of that order passed into the possession of the Knights Hospitallers, who held it until their property was confiscated, at the Reformation, by King Henry the Eighth, who sold Keele to Sir William Sneyd, Knight, of Bradwell. His son and heir, Ralph Sneyd, Esq., “built there,” as stated by Erdeswick, “a very proper and fine house of stone,” which was completed in 1581, and of which a view, engraved by Michael Burghers in 1686, is given in Plot’s History of Staffordshire. Keele was plundered during the Civil Wars, and narrowly escaped demolition by Cromwell’s troops, when its then owner, Colonel Ralph Sneyd, who was a devoted adherent to the cause of King Charles the First, suffered heavy losses on account of his loyalty.

The old hall was finally taken down in 1855, by the late Ralph Sneyd, Esq., who re-erected on its site, and in the same style of architecture, the present noble mansion.

Keele Hall is built of a pale red sandstone, relieved with white stone. It is finely situated on elevated ground, commanding extensive views to the south and west, and is surrounded by a well-wooded park of six hundred acres. The gardens and pleasure grounds are extensive, and well kept.

The house, which is entered from a court, through a spacious hall, thirty feet high, and hung with family portraits, contains a fine suite of rooms, richly famished and decorated, and stored with many precious works of art. The library is extensive and valuable, comprising a rare collection of ancient manuscripts. The house also contains a good collection of pictures by the old masters; amongst which may be mentioned original full-length portraits of Cortez; of King Henry the Eighth; Charles the First, by Honthorst; a Dake of Ferrara, by Zucchero; Lorenzo Priuli, Doge of Venice, by Tintoretto; Ralph Sneyd, the builder of the old house, by Cornelius Jansen; two portraits by Sir Joshua Reynolds; besides many choice cabinet pictures of the English, Flemish, and Italian schools.

The ancient family of Sneyd, which has continued during six centuries in direct male descent from Henry de Sneyde, who lived in the reign of King Edward the First, was formerly seated at Bradwell, in the parish of Wolstanton, but removed from thence, in the reign of Queen Elizabeth, to Keele, which has ever since been the chief family residence.

The genealogy of this old family in a direct line is as follows:—

Henry de Sneyde, of Sneyde and Tunstall, living in 1310, married Margaret, daughter and heiress of Nicholas de Tunstall, by whom he had

Nicholas de Sneyde, alias Tunstall. He was father of

Richard Sneyde, of Bradwell and Tunstall, was followed by

William Sneyde, of Bradwell, who was succeeded by his son,

Richard Sneyde, of Bradwell, who, by Agnes his wife, was father of

Nicholas Sneyde, of Bradwell, living in 1473. He married Margaret, daughter and coheiress of Robert Downes, of Shrigley, Cheshire, and left a son,

William Sneyde, of Chester, who married Johanna, daughter and heiress of Roger Ledsham, Gentleman, of Chester, and had with other children,

Richard Sneyde, of Bradwell, Recorder of Chester, who, by his wife, Anne Fowlehurst, of Crewe, had an eldest son,

Sir William Sneyde, Knight, of Bradwell, High Sheriff of Staffordshire, 3 Edward VI., and 5 and 6 Philip and Mary. He married, first, Anne, daughter and heiress of Thomas Barrowe, Esq., of Flookersbrooke, near Chester, and had by her,

Ralph Sneyde, of Keele and Bradwell, born in 1564, High Sheriff, 18 and 37 Elizabeth, who, by his first wife, Mary, daughter of Thomas Chetwynd, of Ingestrie, had a son and heir,

Ralph Sneyde, of Bradwell and Keele, who married Felicia, daughter of Nicholas Archbald, of Uttoxeter. Their son,

Ralph Sneyde, of Keele and Bradwell, Colonel in the Royal Army, married Jane, daughter of Roger Downes, Esq., of Wordley, and had

William Sneyd, of Keele, born in 1612. His wife was Elizabeth, daughter and coheiress of Robert Audeley, of Gransden, in Huntingdonshire, and by her he had

Ralph Sneyd, of Keele, married to Frances, daughter of Sir Robert Dryden, Bart., of Canons Ashby, Northamptonshire, and had

Ralph Sneyd, of Bradwell, born December 22nd., 1669, who married Frances, daughter of Sir William Noel, Bart., of Kirkby Mallory, in the county of Leicester, and dying before his father, had a son, heir to the latter,

Ralph Sneyd, of Keele, baptized in May, 1692, who married Anne, daughter of Allen Halford, Esq., of Davenham, Cheshire, whose surviving son,

Ralph Sneyd, of Keele, born in 1723, married, in 1749, Barbara, daughter of Sir Walter Longstaffe, Bart., and by her had, with other children,

Walter Sneyd, of Keele, born February 11th., 1752, M.P. for Castle Rising, High Sheriff of Staffordshire, 1814, and Lieutenant-Colonel of the Staffordshire Militia. He married. May 9th., 1786, the Honourable Louisa Bagot, daughter of William, first Lord Bagot, and had