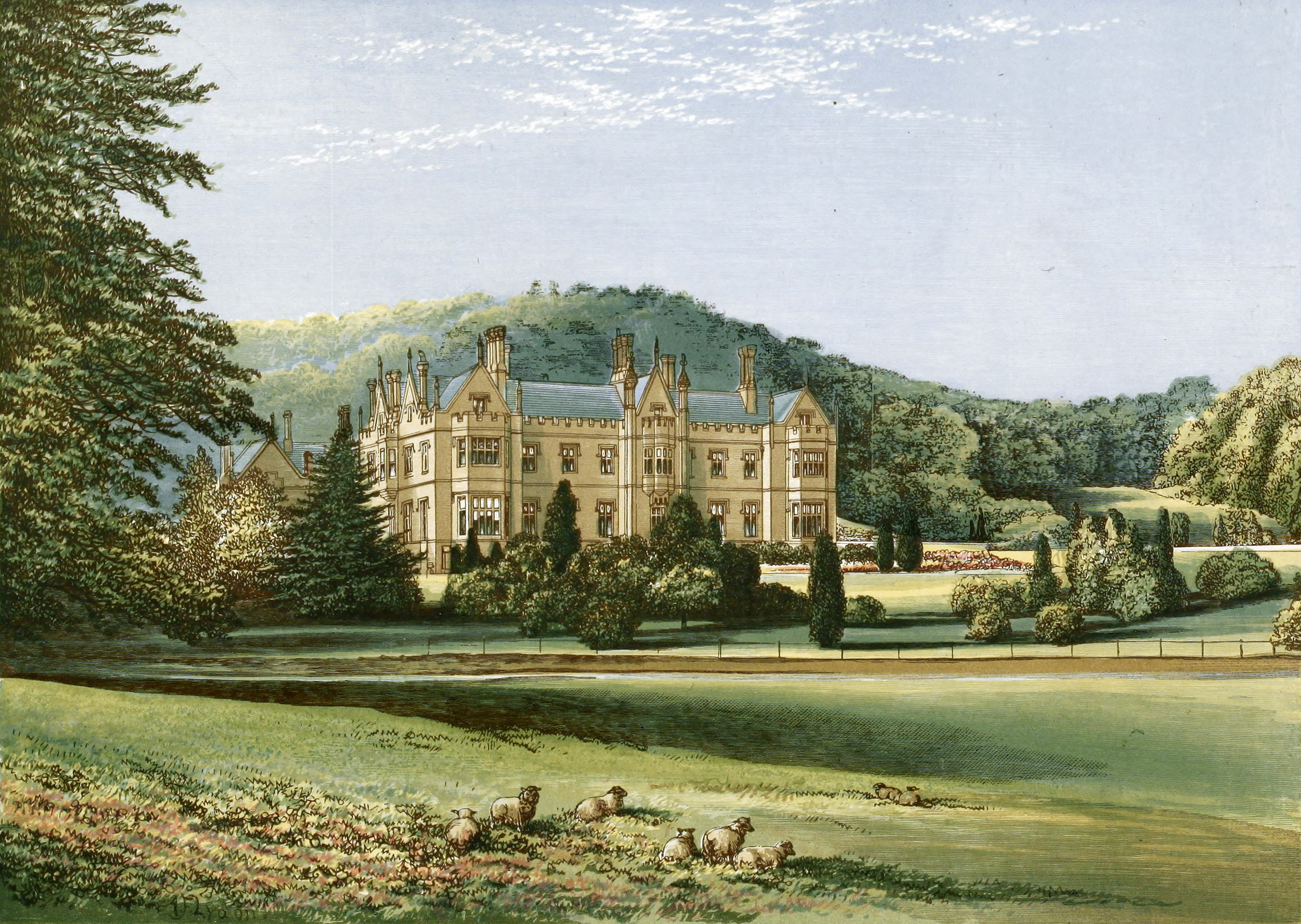 The palatial seat of Sir Lydston Newman, Bart., though perhaps not so picturesque as his favourite marine residence of Stokeley.

Mamhead, in Domesday Book “Mameorde” is thus pronounced by the common people at this very day. It appears to mean “head-land.”

The beauties of the site may be gathered from the subjoined extract from “A Poem written at Mamhead beneath an evergreen oak in 1785,” by the Rev. R. Polwhele.

“Here, Laura, rest, our wearied feet have strayed
From the proud obelisk that fronts the scene
Of many a tufted hill, whose bolder green
The sweet perspective mixed in mellow shade,
While sparkling through the stately fir-trees played
The burnished hamlets of the vale between;
And all the misty bosom of the glade
Seemed opening to the azure sea serene.”

The mansion was rebuilt in 1832 by the father of the present Baronet, from a design by Anthony Salvin. It is composed of Bath stone, very skilfully wrought. The tall chimney stacks and gables, highly ornamented, present a variety of different forms, being relieved by two square and octagonal towers, rising with extremely good effect. There are four fronts to the edifice, uniform in design but varied in detail. The southern front is terminated by a conservatory. The eastern front is exceedingly grand. The large window of the staircase is filled with heraldic designs in painted glass by Willement. The whole building is raised upon terraces, whence the Isle of Portland can be seen in the distance, while in the foreground are the park, Powderham, and the river Exe winding to the channel. The stabling and other offices are built in the castellated style. The architect was evidently acquainted with the principles of taste as developed in the works of the great masters, where an endless variety is found in combination with perfect harmony in the same picture.

The family of Newman is of great antiquity. So early as the reigns of Henry the Sixth and Henry the Seventh, Thomas and William Newman appear from the public records of Dartmouth to have been settled in that town. Over the remains of John Newman, who was buried at St. Petrox, 6th. April, 1640, are to be seen the arms now borne by the family.

The father of the present Baronet^ Sir Robert William Newman, married in 1813, Mary Jane, daughter of Richard Denne, Esq., of Winchelsea, in Sussex, by Ann his wife, daughter of the Venerable William Rastall, D.D., Dean of Southwell, a lineal descendant of Chief Justice Rastall.

The ancient family of the Dennes is descended from Ralph de Dene, living in the time of the Conqueror, Lord of Buckhurst, in Sussex, who wedded Sybella, sister of Robert de Gatton, and had a son Robert, his heir, and a daughter Ella, married to Sir J. Sackville, ancestor of the Dukes of Dorset.

Sir Robert Lydston Newman, a Captain in the Grenadier Guards, who fell at the Battle of Inkermann, 5th. November, 1854, and was succeeded by his brother, the present and third Baronet,