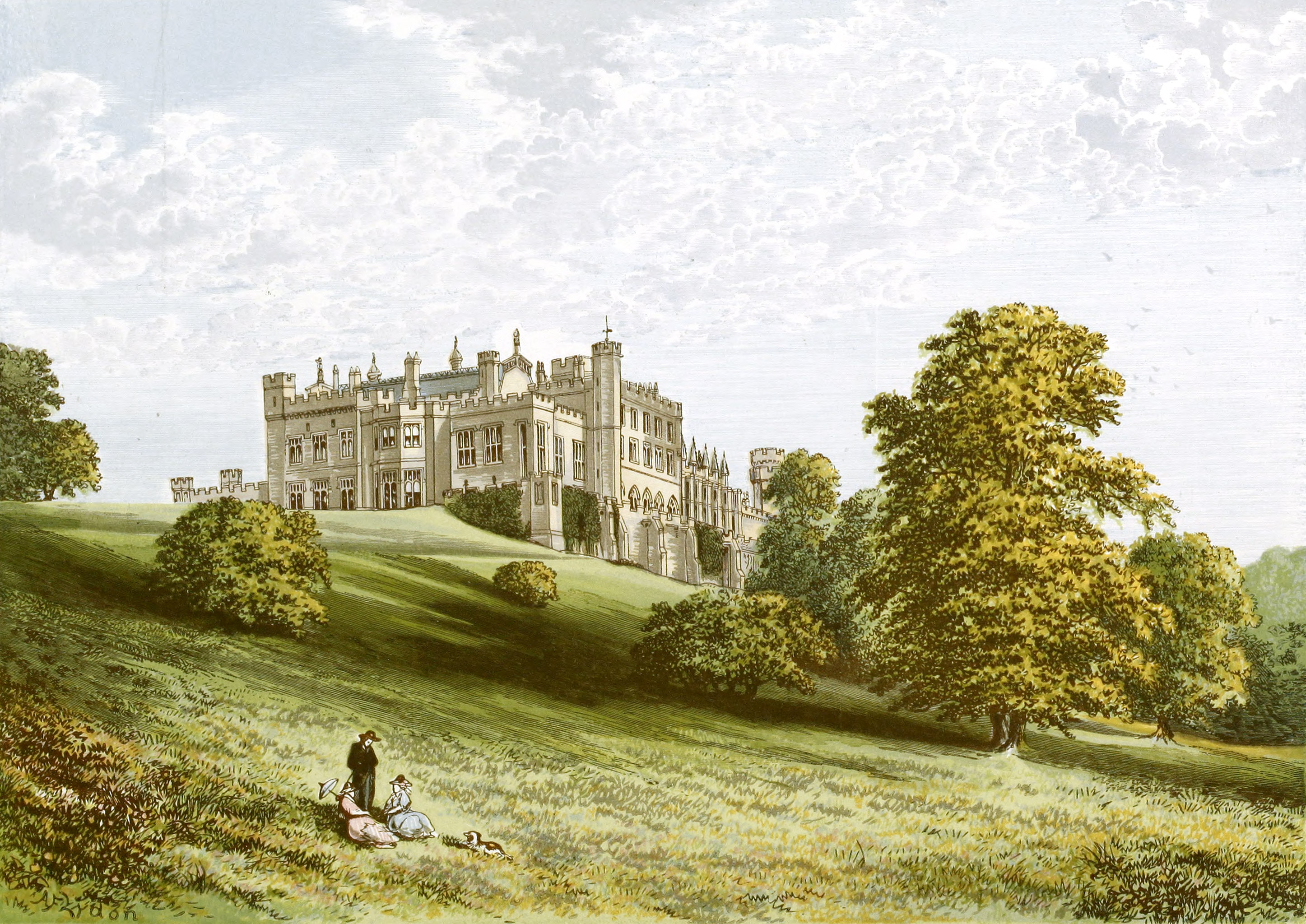 Lambton Castle, built from the designs of Ignatius Bonomi, on the site of Harraton Hall—anciently the residence of the D^Arcys and Hedworths—occupies an eminence ovei’hanging- the river Wear, and is almost completely sheltered by the woods which crown the valley. On the west, where the banks recede, the hills of the moors are seen bounding the horizon.

The bridge, erected by John George Lambton, Esq., over the river in the valley beneath the castle, from whence it is visible, forms a beautiful feature in the landscape.

The rooms of the castle, arranged with great elegance and attention to comfort, contain many valuable paintings, among which are two by Domenichino, one by Bassano, one by Titian, one by Raphael, two by Bothe, one by Salvator Rosa, one by Giorgione, one by Baroccio, one by Breughels; etc., etc., and several excellent pictures by Glover and other English artists.

The demesne was in the possession of the Lambtons before the Conquest, and has remained in that family through an uninterrupted line of succession.

The well known story of the Lambton eft, water-wyvern, or water snake, is thus told by Surtees:—”The heir of Lambton, fishing, as was his profane custom, in the Wear, on a Sunday, hooked a small worm, or eft, which he carelessly threw into a well, and thought no more of the adventure. The worm (at first neglected) grew till it was too large for its first habitation, and issuing from the Worm Well, betook itself to the Wear, where it usually lay a part of the day coiled round a crag in the middle of the water; it also frequented a green mound near the well (the Worm Hill), where it lapped itself nine times round, leaving vermicular traces, of which grave living witnesses depose that they have seen the vestiges. It now became the terror of the country, and, amongst other enormities, levied a daily contribution of nine cows’ milk, which was always placed for it at the green hill, and in default of which it devoured man and beast. Young Lambton had, it seems, meanwhile totally repented him of his former life and conversation, had bathed himself in a bath of holy water, taken the sign of the Cross, and joined the Crusaders. On his return home, he was extremely shocked at witnessing the effects of his youthful imprudences, and immediately undertook the adventure. After several fierce combats, in which the Crusader was foiled by his enemy^s power of self-union, he found it expedient to add policy to courage, and not perhaps possessing much of the former, he went to consult a witch, or wise woman.

“By her judicious advice, he armed himself in a coat of mail studded with razor- blades; and thus prepared, placed himself on the crag in the river, and awaited the monster’s arrival. At the usual time, the worm came to the rock and wound himself with great fury round the armed knight, who had the satisfaction to see his enemy cut in pieces by his own efforts, whilst the stream, washing away the severed parts, prevented the possibility of re-union. There is still a sequel to the story: the witch had promised Lambton success only on one condition,—that he should slay the first living thing which met his sight after the victory. To avoid the possibility of human slaughter, Lambton had directed his father that as soon as he heard him sound three blasts on his bugle in token of the achievement performed, he should release his favourite greyhound, which would immediately fly to the sound of the horn, and was destined to be the sacrifice. On hearing his son’s bugle, however, the old chief was so overjoyed that he forgot the injunction, and ran himself with open arms to meet his son. Instead of committing a parricide, the conqueror again repaired to his adviser, who pronounced as the alternative of disobeying the original instructions, that no chief of the Lambtons should die in his bed for seven, or (as some accounts say,) for nine generations—a commutation which to a martial spirit had nothing very terrible, and which was willingly complied with.”

On this legend Sir Bernard Burke remarks:—”The subject matter of the exploit may be equally a Danish rover, a domestic tyrant, or, as in the well-known case of the Dragon of Wantley, a villainous overgrown lawyer, endowed with all the venom, maw, and speed of a flying eft, whom the gallant ‘Moor of Moor Hall’ slew ‘with nothing at all’ but the aid of a good conscience and a ‘fair maid of sixteen.’”