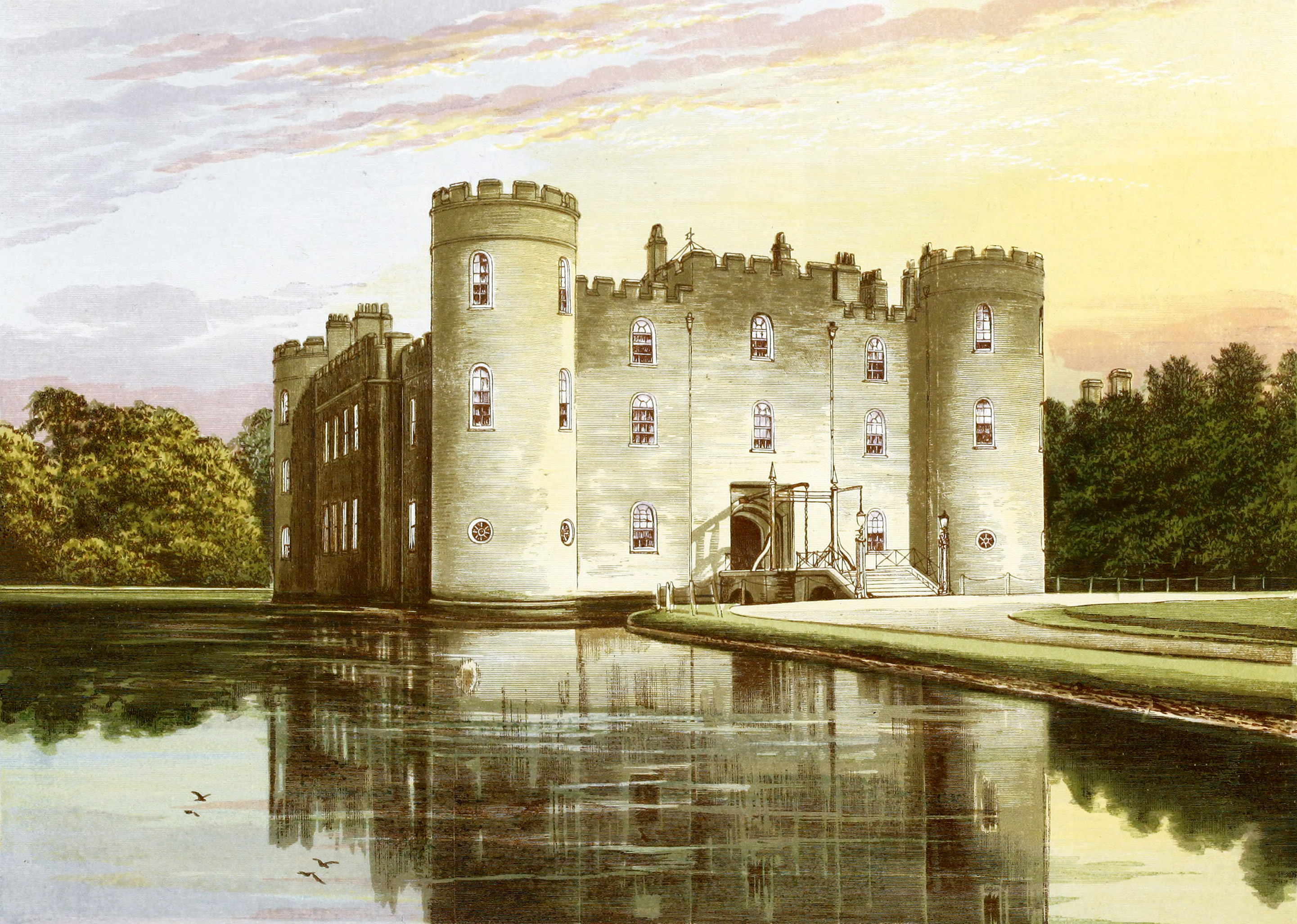 Leland writes, “Shirburne, within a mile of Wathelington church, where is a strong pile, or castlet, longed to Quatremain, since to Fowler, and by exchange, now to Chamberlain of Oxfordshire.”

Camden states, that “the Chamberlains were descended from the Earls of Tankervil, who, bearing the office of Chamberlain to the Dukes of Normandy, their posterity, laying aside the old name of Tankervil, called themselves Chamberlain, from the said office which their ancestors enjoyed.”

It appears, that, in the fifty-first year of Edward the Third, Sir Wariner de L’Isle, Knight, obtained permission to build a castle at Shirburn, where his ancestor, Wariner de L’Isle, in the tenth year of the same king, had a charter of free-warren, and leave to enclose one hundred acres of woodland for a park.

Shirburn Castle is nearly in the form of a parallelogram, and the whole building is encompassed by a broad and deep moat. The approaches are over three drawbridges, and the chief entrance is guarded by a portcullis. At each angle of the edifice is a circular tower. Flat ranges of stone-building occupy the intervals, and along the whole top is an embattled parapet.

In the twelfth volume of the “Beauties of England and Wales,” Mr. Brewer, the able writer of the account of Oxfordshire, states, that “the interior of Shirburn Castle is disposed in a style of modern elegance and comfort that contains no allusion to the external castellated character of the structure, with an exception of one long room fitted up as an armoury. On the sides of this apartment are hung various pieces of mail, together with shields, tilting-spears, and offensive arms, of modern as well as ancient date. The rooms are in general well proportioned, but not of very large dimensions. There are two capacious libraries, well furnished with books, and tastefully adorned with paintings and sculpture. Among the portraits are several of the Lord Chancellor Macclesfield, and an original of Catharine Parr, Queen to Henry the Eighth. She is represented standing behind a highly embellished vacant chair, with her hand on the back. Her dress is black, richly ornamented with precious stones. The fingers are loaded with rings; and in one hand is a handkerchief, edged with deep lace. Inserted in the lower part of the frame, and carefully covered with glass, is an interesting appendage to this portrait: a piece of hair cut from the head of Catharine Parr, in the year 1799, when her coffin was opened at Sudeley Castle. The hair is auburn, and matches exactly with that delineated in the picture.

Shirburn Castle was honoured with a visit from the Queen and Princesses, in the summer of 1808.”

George Parker, Esq., of Park Hall, in Staffordshire, was father of

Thomas Parker, Esq., of Leke, in the same county, whose son was

Thomas Parker, first Earl of Macclesfield, who may be considered as the founder

of the family. The castle and manor of Shirburn were purchased at the commence- ment of the last century by him. He was bred to the law, called to the degree of Sergeant in 1705, constituted Chief Justice of the King’s Bench 1709–10, by Queen Anne, and appointed Lord Chancellor by George the First in 1718. He was created Baron Macclesfield, March 9th., 1716, and advanced to the dignity of Viscount Parker and Earl of Macclesfield, November 15th., 1721. He died in 1732, having married Janet, daughter and coheiress of Charles Carrier, Esq., of Wirkworth, in Derbyshire. His son,

George Parker, the second Earl, was President of the Royal Society, and LL.D. of the University of Oxford, and was chiefly remarkable for the part which he took in the alteration of the style in 1750. He was also author of “Remarks on the Polar and Lunar Years,” etc. He married, first, 1722, Mary, elder daughter and coheiress of Ralph Lane, Esq., an eminent Turkey merchant.

Thomas Parker, the third Earl, who succeeded to the title, March 17th., 1764, married, December 12th., 1749, his cousin Mary, eldest daughter of Sir William Heathcote, Bart., and had issue two sons and two daughters. He dying February 9th., 1795, was succeeded by his eldest son,

George Parker, fourth Earl, who married, may 25th., 1780, Mary Frances, daughter and coheiress of the Rev. Thomas Drake, D.D., Rector of Amersham, Buckinghamshire, but having no son, was succeeded in the title by his only brother,