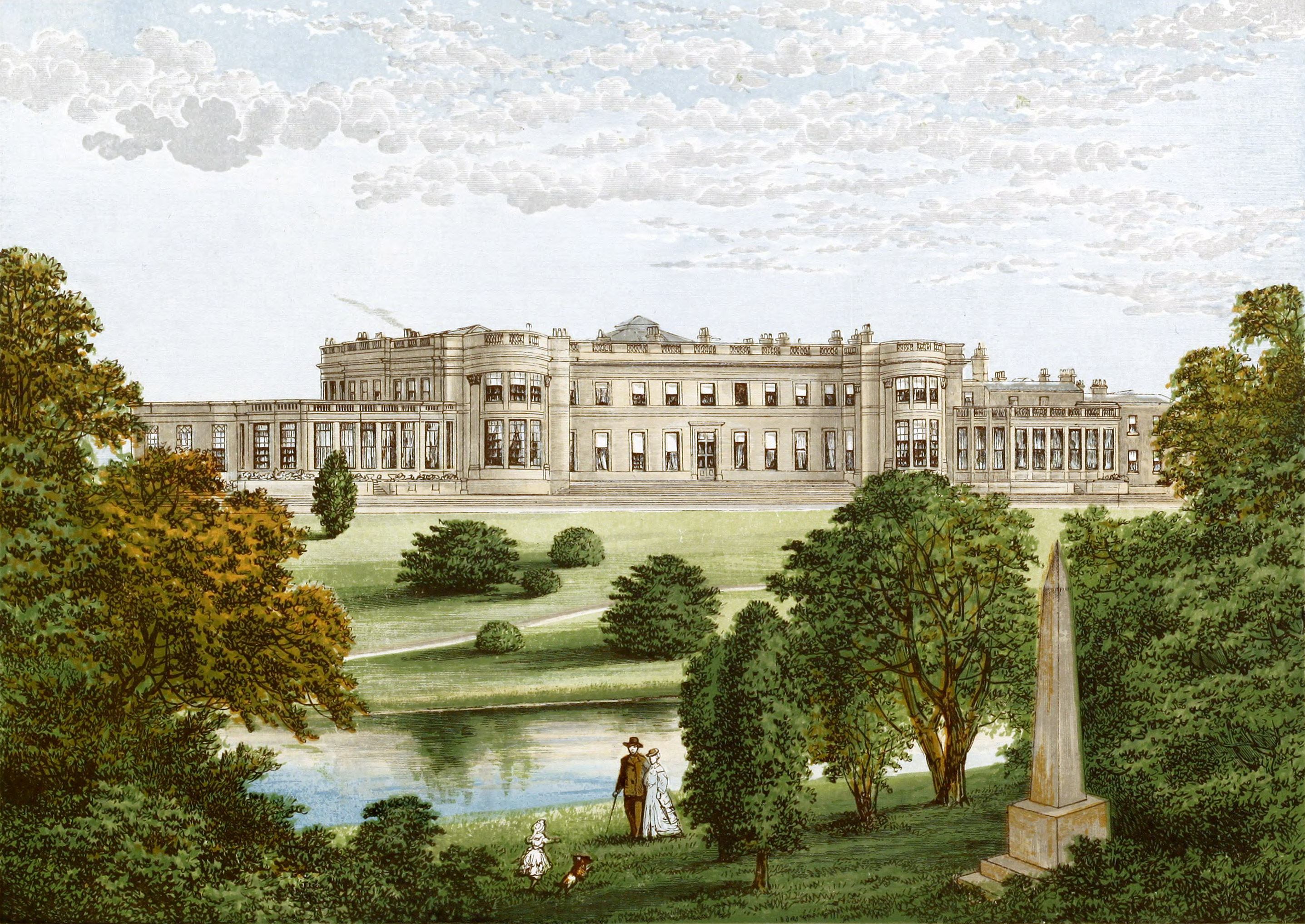 Near Stockton-on-Tees, Durham.—Marquis of Londonderry.

Wynyard Park is the principal residence of tlie Marquis of Londonderry^ whose father, Charles, the third Marquis, became possessed of Wynyard, and large estates and collieries in the county of Durham, by his marriage with the Lady Frances Anne Vane Tempest, only child of Sir Henry Vane Tempest, Bart., and the Antrim.

The park, about two thousand acres in extent, affords much varied and beautiful scenery, with some fine views of the Cleveland Hills in Yorkshire.

About the centre of the park, and on the margin of a large artificial lake, whose sloping banks are planted with a great variety of evergreens and other ornamental trees, stands the house, a large and splendid mansion of Corinthian architecture, erected by the late Marquis on the site of an older seat.

The north front is graced by a portico, consisting of twelve handsome columns surmounted by an entablature.

The sculpture gallery, a magnificent apartment one hundred feet long and fifty- eight feet high, which forms the centre of the mansion, is octagonal, and has a double dome, with a lantern of very beautiful stained glass in the centre.

The south front measures three hundred feet in length. It looks handsome terraces, and down upon the lake, which is here spanned by a very graceful chain bridge.

About a quarter of a mile from the mansion are the gardens, which cover a space of thirteen acres, in addition to the extensive pleasure grounds.

Wynyard Park is seven miles distant from the town border river between the county of Durham and Yorkshire.

The descent of the family of the Marquis of Londonderry is as follows:—

John Stewart, Esq., of Ballylawn Castle, in the County of Donegal, the first of his family who settled in Ireland, was succeeded at his decease by his eldest son,

Alexander Stewart, Esq., of Mount Stewart, in the County of Down, born in the year 1709, married the 30th. of June, 1737, Mary, only surviving daughter of Alderman John Cowan, of Londonderry, and sister and heiress of Sir Robert Cowan, Knight, Governor of Bombay, and had, with other children,

The Right Honourable Robert Stewart, of Mount Stewart and Ballylawn Castle, who was raised to the Peerage of Ireland, November 18tli., 1789, as Baron Stewart, and subsequently was further elevated, October 6th., 1795, as Viscount Castlbreagh; afterwards, August 10th., 1796, as Earl of Londonderry, and on the 22nd. of January, 1816, Marquis of Londonderry. He married first, in 1766, the Honourable Sarah Prances Seymour, second daughter of Francis, first Marquis of Hertford, by whom he had Robert, Viscount Castlereagh, his successor, and secondly, in 1775, Frances, eldest daughter of Charles, first Earl Camden, by whom he had, with other issue, Charles William Stewart, third Marquis. He died April 8th., 1821, and was succeeded by the son of his first marriage,

Robert Stewart, second Marquis, who married in 1794, the Honourable Emily Anne Hobart, youngest daughter and coheiress of John, second Earl of Buckingham- shire, but had no children, and was followed by his half brother,

Charles William Stewart, K.G., third Marquis, born May 18th., 1778, who married first, August 8th., 1804, the Honourable Catherine Bligh, youngest daughter of John, third Earl of Darnley, by whom he had a son,

He married, secondly, as above stated, April 3rd., 1819, Lady Frances Anne Tempest, only daughter and heiress of Sir Henry Vane Tempest, Bart., on which occasion he assumed the surname and arms of Vane. He was created, on the 8th. of July, 1823, Earl Vane, with remainder to the issue of his second wife, by whom he had

George Henry Robert Charles Stewart, Viscount Seaham and second Earl Vane, who on the death of his half brother succeeded as fifth Marquis of Londonderry. He married, August 3rd., 1846, Mary Cornelia, only daughter of Sir John Edwards, Bart.