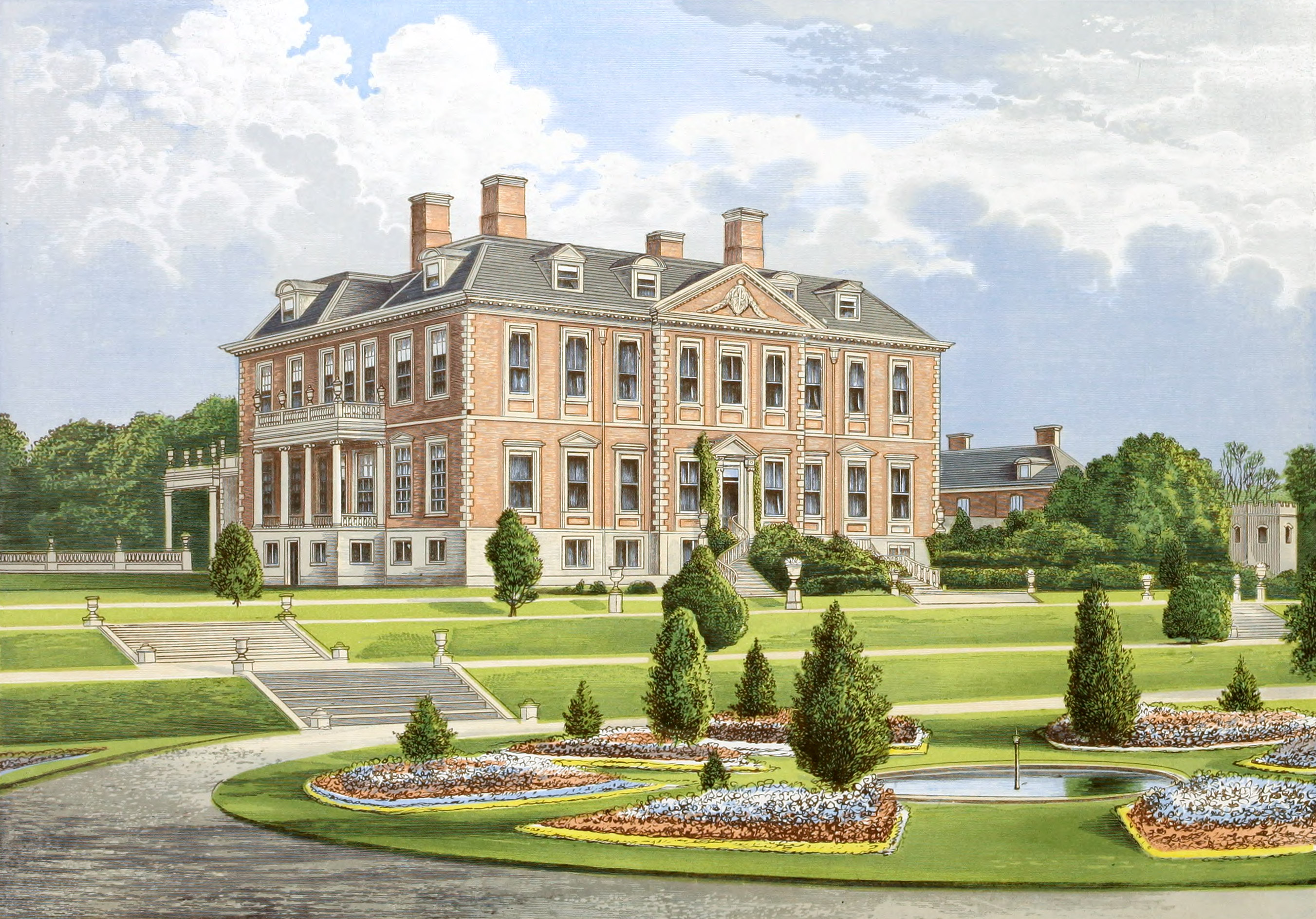 This estate first came into the possession of the family of Lord Hastings by the marriage of Thomas, Lord Astley, with Editha, sister and coheiress of Sir Robert Constable, Knight, the then owner.

The present mansion was erected, in or about the year 1680, by Sir Jacob Astley. It stands on an eminence, of gradual ascent for some miles around, and, having four fronts, has naturally a noble series of home views to the south, east, and west, that to the north being bounded by the open sea.

In the library are many valuable books, besides a very fine collection of prints.

In the grounds is an aviary, containing birds of rich and brilliant plumage.

At a little distance from the house, on the road to Holt, is a lofty tower, also

built by Sir Jacob Astley, and well denominated “Belle-vue,” for from it a variety of views extends over a richly cultivated country for five and twenty miles in all directions, embracing several villages, Walsham Church, and Holt, Norwich Cathedral, and Clay, on the sea coast.

The park, which is four miles in circumference, comprising about seven hundred acres of land, has been greatly improved of late years by planting, and has also the adornment of an extensive expanse of water.

In Dugdale’s Warwickshire may be found many curious and interesting particulars of the earlier ancestors of this ancient family.

Sir Thomas Astley, Knight, fell at the battle of Evesham, tempore Henry III. By his second wife, Editha, daughter of Peter Constable, Esq., of Melton Constable, and coheiress of her brother, Sir Robert Constable, Knight, with whom he acquired the estate, he had three sons, from the second of whom,

Thomas Astley, of Hill Morton, in Warwickshire, the seventh in succession, descended,

John Astley, of Hill Morton and Melton Constable, who married Frances, daughter and heiress of John Cheyney, Esq., of Sittingbourne, Kent, and was succeeded by his only surviving son,

Isaac Astley. This gentleman married Mary, daughter of Edward Waldegrave, Esq., of Borley, Essex, and had two sons, of whom the elder,

Sir Francis Astley, Knight, died without issue, when the estates went to his next, the second, brother,

Sir Isaac Astlet, Baronet, so created January 21st., 1641. He married twice, but had no children, and the Baronetcy expiring, the estates went to his nephew,

Sir Jacob Astley, Knight, (son of the third brother, as above, by his wife, the Honourable Elizabeth Astley, daughter of Jacob, Lord Astley,—she died in 1653). He was created a Baronet, June 25th., 1660, and represented the county of Norfolk in Parliament for forty years. He married Blanche, eldest daughter of Sir Philip Wodehouse, Baronet, of Kimberley, Norfolk, and their eldest surviving son,

Sir Philip Astley, Baronet, married Elizabeth, daughter and heiress of Thomas Bransby, Esq., of Caistor, Norfolk, whose son and successor, at his decease, July 7th., 1739, was

Sir Jacob Astley, Baronet, who, by his first wife, whom he married in 1721, Lucy, youngest daughter of Sir Nicholas L’Estrange, Baronet, of Hunstanton, Norfolk, and coheiress of her brother, Sir Henry L’Estrange, Baronet, had an eldest son, who, at his death, January 5th., 1760, succeeded as

Sir Edward Astley, Baronet, born in 1728, who married, first, in 1751, Rhoda, eldest surviving daughter of Francis Blake Delaval, Esq., of Seaton Delaval, North- umberland, and sister of John, Lord Delaval, by whom he had an eldest son, who, at his death in 1802, became

Sir Jacob Astley, Baronet, born September 12th., 1756, M.P. for Norfolk for twenty years. He married, in 1789, Hester, youngest daughter and coheiress of Samuel Browne, Esq., of King’s Lynn, Norfolk, and had nine children, of whom, at his decease, April 28th., 1817, the eldest son succeeded to the title, namely,

Sir Jacob Astley, Baronet, born September 13th., 1797, married, in 1819, to Georgiana Carolina, second daughter of Sir Henry Watkin Daskwood, Baronet. The ancient Barony of Hastings, created by Edward I. in 1290, which had fallen into abeyance, was determined in his favour by the House of Peers, and he accordingly was summoned to Parliament under that title. He died December 27th., 1859, and was followed by his eldest son,

Sir Jacob Delaval Astley, Baronet, Baron Hastings, an officer in the Life Guards, D.L. for Norfolk, and Honorary Colonel of the Norfolk Artillery Militia, who was born May 21st., 1822, and married, May 19th., 1860, Frances, daughter of Mr. T. Cosham, but had no children, and was succeeded therefore at his death, March 8th., 1871, by his brother,