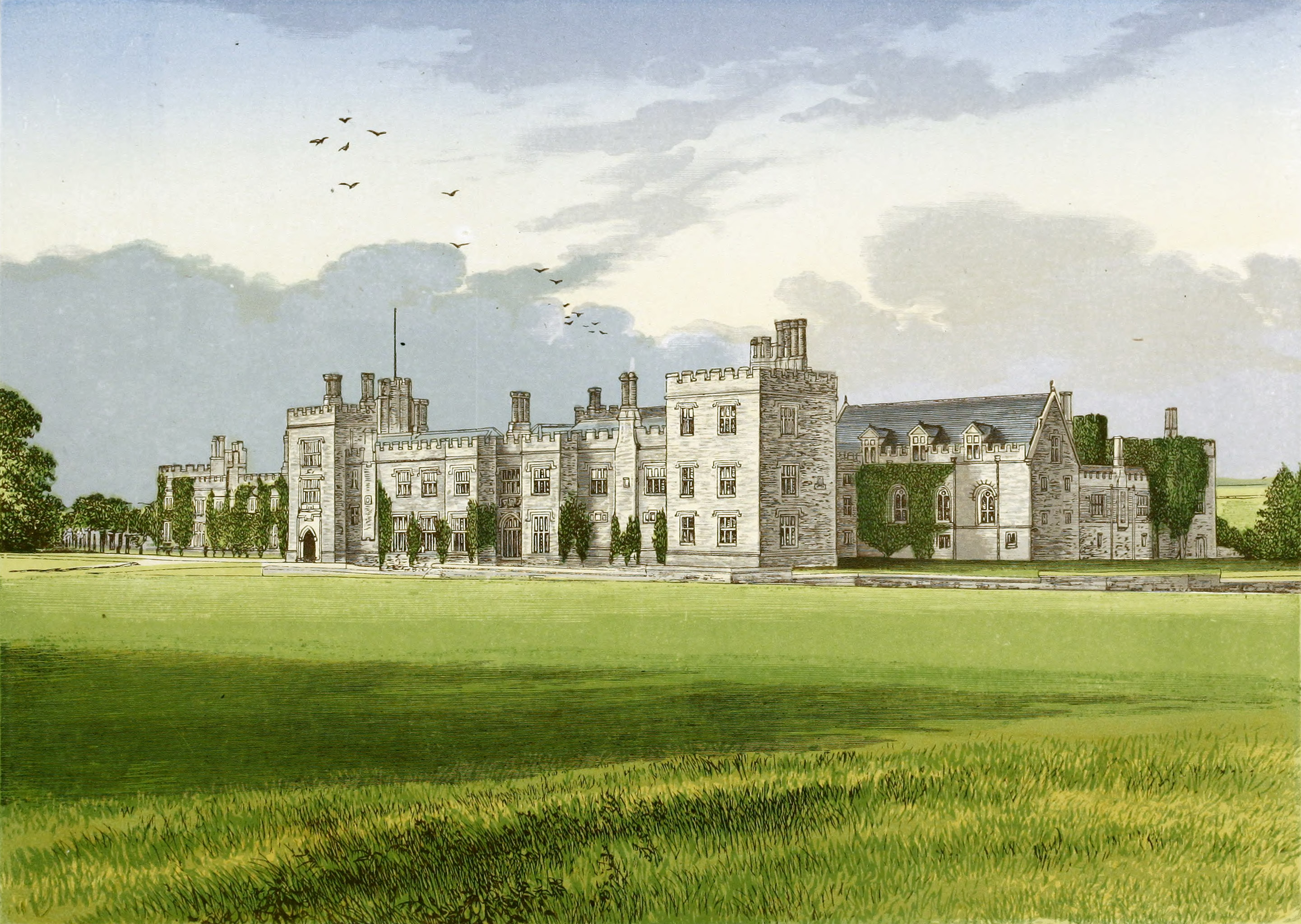 The ancient and noble mansion of Penshurst stands at the south-east corner of a park beautifully diversified with woods, hills, and lawns, and well planted with large oak, beech, and chestnut trees.

The architecture of different ages is to be traced in separate parts of the edifice, additions and alterations having been made from time to time by successive proprietors. A late owner of Penshurst expended a considerable sum upon this venerable family residence, and directed the work with a good display of taste and judgment.

Over an ancient gateway, which forms the principal entrance, is the following inscription:—

The most religiovs and renowned
Prince, Edward the Sixt, Kinge of
England, France, and Irelande, gave
this house of Pencester, with the mannors,
landes, and uppyrtonaynces ther
vnto beloninge vnto his trvstye
and welbeloved servant Syr
William Sydney, Knight Banneret.

The hall is a striking object of architectural beauty, and is indeed the principal feature of the mansion. At its upper end is a staircase leading to the State Apartments and Gallery; opposite this is the passage to the Chapel.

The gardens are extensive, and laid out with excellent taste.

A curious relic of the ancient splendour of this place is still retained in its heronry, one of the very few now remaining in this country. some lofty beech trees on a hilly part of the estate.

The south side of the park is watered by the river Medway.

It is situated on In the reign of Edward the First this manor was possessed by Sir Stephen de Peneshurste, after whom it successively became the property of the distinguished families of Columbers, de Pulteney, and Devereux. It was embattled and fortified under a royal licence granted by King Richard the Second to Sir John Devereux. Shortly afterwards the manor was sold to John, Duke of Bedford, third son of King Henry the Fourth, whose brother Humphrey, Duke of Gloucester, succeeded him; but he dying also without issue, Penshurst came into the hands of the crown, and was granted by letters patent (as recorded in the inscription given above) to Sir William Sidney, with which illustrious family Penshurst has ever since been connected.

There is, I think, no name in the whole roll of the British aristocracy held in more esteem than that of Sydney, from which the present family derives in the female line.

Sir William Sydney, had Penshurst Place granted to him by Edward the Sixth, and was afterwards Chamberlain and Steward of the Household to Henry the Eighth. He was one of the commanders at the battle of Flodden Field. His son.

Sir Henry Sydney, had also been honoured with the confidence and friendship of King Edward the Sixth, and became Lord President of Wales and Lord Deputy of Ireland under Queen Elizabeth. Dr. Zouch wrote of him, “A more exalted character than that of Sir Henry Sydney is scarcely to be found in the volume of history. It deserves to be better known. In him we behold the brave soldier, the consummate general, the able counsellor, the wise legislator; while in the recesses of private life he was no less estimable as a husband, a father, and a friend; firmly attached to the Church of England, and adorning his Christian profession by his temperance and exemplary piety.” He was father of

Sir Philip Sydney, described by Camden as “the great glory of his family, the great hope of mankind, the most lovely pattern of virtue, and the glory of the world,” and also of (his second son)

Sir Robert Sydney, who was created successively by King James the First, Baron Sydney of Penshurst, Viscount L’Isle, and Earl of Leicester. He was succeeded by his son.

Sir Philip Sydney, third Earl, who died in 1697, and was succeeded by his son.

Sir Robert Sydney, fourth Earl, who died in 1702, followed in succession by his three elder sons.

Sir Jocelyn Sydney, seventh Earl, with whom the peerage expired.

The fourth son (of the fourth Earl) had predeceased, leaving two daughters, one of whom married William Perry, Esq., of Turville Park, by whom she had a daughter, Elizabeth Jane Sydney Perry, who became the second wife of

Sir John Shelley Sydney, (the latter surname being added to his patronymic), created a Baronet December 12th., 1818, and his son,