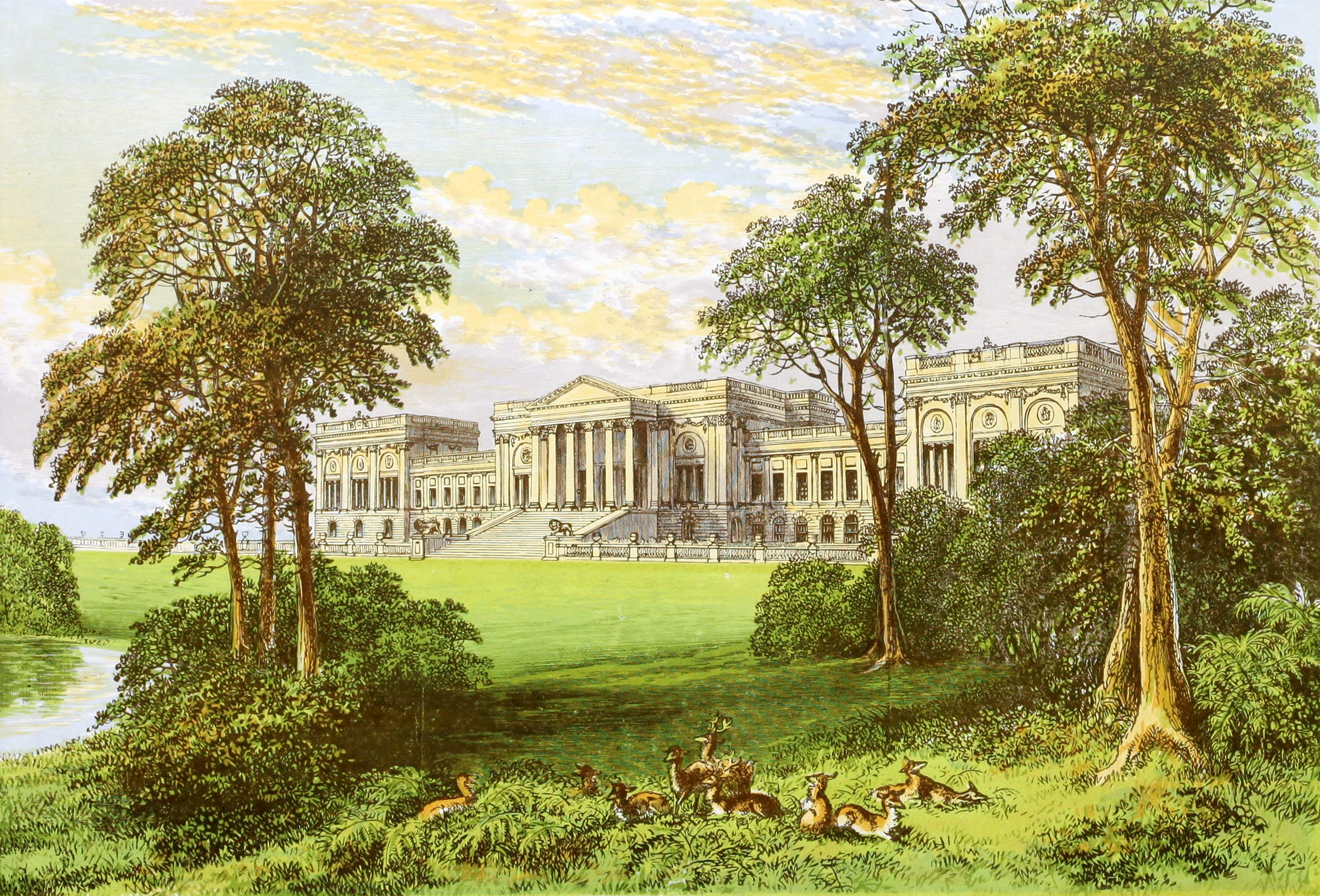 Near Buckingham, Buckinghamshire.—Duke and Marquis of Buckingham and Chandos.

Stowe, in local language, means, it is said, an eminence or rising ground, and hence to this place its name.

The house, which was originally designed, it is stated, by Lord Camelford and Lord Cobham, is in the Grecian style of architecture, with a centre of four hundred and fifty-four feet, which, with the two wings, makes the whole front nine hundred and sixteen feet in length, including the chapel.

A stately avenue of two miles long leads from the town of Buckingham, about two miles distant, to the park, at the entrance of which is a Corinthian arch sixty feet high.

Within the grounds the principal objects of note are, a cedar tree twenty-two feet in girth; a column erected in honour of Captain Grenville, who fell in a sea-fight against the French, under Lord Anson, in 1747; a monument to Captain Cook; the Temple of ancient virtue, containing many statues; the Queen’s Temple, in honour of Queen Charlotte, 1789; the Palladian Bridge; the Temple of Friendship, erected by Lord Cobham to receive the busts of his political friends; the Gothic Temple; the Bourbon Tower, surrounded by trees planted by Louis the Eighteenth; a column one hundred and fifteen feet high, surmounted by a statue of Lord Cobham; the Temple of Concord and Victory, built by Lord Cobham in memoriam of the Seven Years’ War, and in front of it are some oak trees planted by Queen Victoria on occasion of her visit to Stowe in 1845, and two cedars by Prince Albert. “There is a charming flower-garden, thickly surrounded by high trees, firs, cedars, evergreens, and flowering shrubs.”

Stowe was formerly an abbey, and on the dissolution of the monasteries was granted by King Henry the Eighth to

Robert King, the first Bishop of Oxford, who had been Abbot of Osney, and to his successors in the see.

It was afterwards surrendered by the then Bishop to the crown, and was granted in the year 1500 to

Thomas Compton and another, by whom it was immediately conveyed to

Sir Thomas Temple, was created a Baronet in 1612. His descendant,

Sir Richard Temple, was highly distinguished in the wars under the Duke of Marlborough in the reign of William the Third, and on the accession to the throne of King George the First, was made Baron Cobhain, of Cobham, in the county of Kent, and further advanced in the year 1718 by the title of Viscount Cobham.

On his death the title of Baronet went to a younger branch of the family. His second sister, Mrs. Grenville, became Viscountess Cobham, and was soon afterwards made Countess Temple.

Richard, Earl Temple, died without issue, and was succeeded by his nephew, George Grenville, who was created Marquis of Buckingham. In 1799 the then possessor of the title,

Richard Grenville Nugent Chandos Temple, was made Earl Temple of Stowe, and

in 1822 Duke of Buckingham and Chandos.

The ducal family of Buckingham, now represented by Richard Plantagenet Campbell Temple Nugent Brydges Chandos Grenville, the present Duke, derives from a family of the last-mentioned surname living at Wootton-under-Barnwood, in the county of Buckingham, in the reign of Henry the Fifth, and more immediately from Richard Grenville, Esq., who succeeded to the estates in 1618. He was followed in succession by

Richard Grenville, second Marquis of Buckingham, further raised in the peerage as Marquis of Chandos and Duke of Buckingham and Chandos, father of the above- mentioned second Duke.