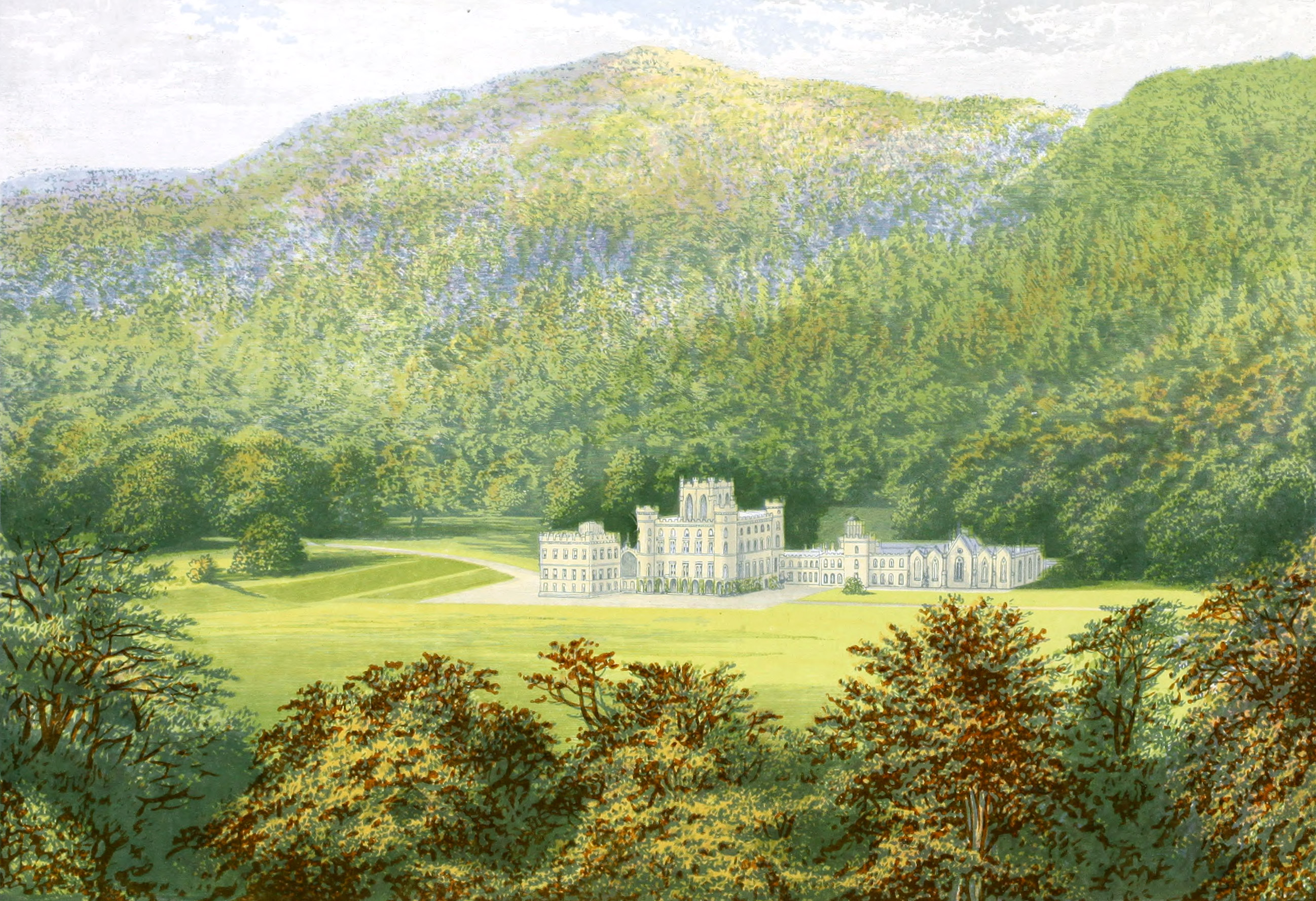 Near Aberfeldy, Perthshire.—Earl of Breadalbane.

This magnificent seat may well carry us back in thought to the feudal times, and even in them it would have been conspicuous for size, grandeur, and beauty.

The estate is no less than about a hundred miles long, and the castle is situated moreover in one of the most delightful valleys for which the Highlands of Scotland are so deservedly famous.

So regal a residence deserves a royal description, and the following lines by Queen Victoria are from Her Majesty’s “Leaves from the Journal of Our Life in the Highlands:”—

“The drive was quite beautiful all the way to Taymouth. The two highest hills of the range on each side are (to the right, as you go on after leaving Dunkeld) Craig-y-Barns and (to the left, immediately above Dunkeld) Craigoinean. The Tay winds along beautifully, and the hills are richly wooded.

“Taymouth lies in a valley surrounded by very high, wooded hills; it is most beautiful. The house is a kind of castle, built of granite. The coup oV oe.il was indescribable. There were a number of Lord Breadalbane’s Highlanders, all in the Campbell tartan, drawn up in front of the house, with Lord Breadalbane himself in a Highland dress at their head, a few of Sir Neil Menzies’ men (in the Menzies red and white tartan,) a number of pipers playing, and a company of the 92nd. Highlanders, also in kilts. The firing of the guns, the cheering of the great crowd, the picturesqueness of the dresses, the beauty of the surrounding country, with its rich back-ground of wooded hills, altogether formed one of the finest scenes imagi- nable. It seemed as if a great chieftain in olden feudal times was receiving his sovereign. It was princely and romantic. Lord and Lady Breadalbane took us up stairs, the hall and stairs being lined with Highlanders.

“The Gothic staircase is of stone and very fine; the whole of the house is newly and exquisitely furnished. The drawing-room, especially, is splendid. Thence you go into a passage and a library, which adjoins our private apartments.

“The dining-room is a fine room in Gothic style, and has never been dined in till this day. Our apartments also are inhabited for the first time.”

The deer park is very extensive, and is adorned with abundance of stately timber: there is an avenue of lime trees nearly a mile long.

Here was formerly an ancient castle, called Ballock, but only some remains of it are now extant. It was erected by Colin, sixth Laird of Glenurchy, who died there in the month of April, 1583.

The modern mansion was begun about the beginning of the present century. It stands upon the southern bank of the Tay, in a semicircular lawn about a mile below the termination of the lake, embosomed by woods that well-nigh seem inter- minable. It consists of a large quadrangle, with a circular tower at each, corner, a lofty lantern tower in the centre, and an eastern wing one hundred and eight feet long, in which are comprised the offices. An arched cloister goes round the exterior on three sides, the tracery of which is exceedingly light and beautiful.

The principal rooms are the baron’s hall, containing a large collection of books, thedining-room,thedrawing-room,andtheChineseroom. Thegrandstaircase,inthe florid Gothic style of architecture, rises to the full height of the central tower, being lighted above by long pointed windows, while galleries open below to the apartments in the higher storeys.

There are in the castle many valuable pictures by some of the great masters, Titian, Annibale Carraci, Tintoretto, Castiglione, Teniers, Vandyke, Rembrandt, Leonardo da Vinci, Salvator Rosa, etc.

It has been well written, by one who viewed this splendid place under the right aspect, “Nothing can exceed the beauty and grandeur of the scenery of this princely domain. Wood and water, mountain, meadow, objects animate and inanimate, in endless variety, are here so blended, and on such a scale, that when viewed from certain positions, and in certain states of the atmosphere, they give you an impression as if you had been ti’ansported to a region of enchantment. But to speak becomingly, there is here the workmanship of far more than enchanter’s ken, or enchanter’s might:—

“Surrounded by His power we stand;
On every side we feel His hand.
Oh! skill for human reach too high,—
Too dazzling bright for mortal eye!”

The family of the Earl of Breadalbane derives from Gillespick Campbell, living in the tenth century.